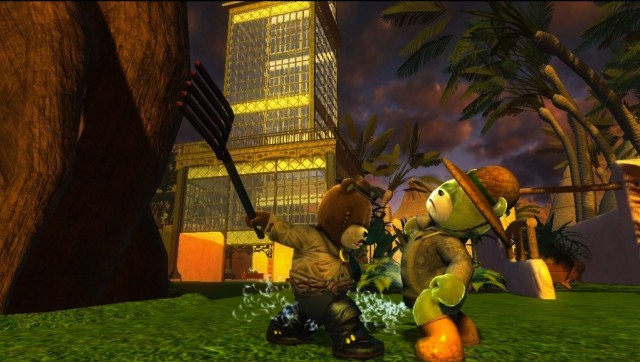 It’s no secret that 505 Games is putting together a new Naughty Bear title, Panic in Paradise, for later this year, but now the developer has given fans of cuddly carnage a better idea of when they can expect to step back into the shoes of the cutest psychopath in video games – it will hit XBLA and PSN in October.

The news comes as 505 releases another gameplay trailer which, like the one before it, is very brief at just around 30 seconds. This clip focuses on the bear at the top of the titular character’s “Hit List”: Cuddles, apparently in charge of checking in guests at whatever resort Naughty Bear is terrorizing. There’s a glimpse of the full list at the end of the clip, showing 10 names – perhaps an indicator of the game’s length.

The fact that Naughty Bear will see a sequel at all is surprising and more than a little puzzling – after all, the original game (a full retail title) was almost universally panned when it hit in June 2010, currently sitting at a 43 percent rating on Metacritic (whatever that particular metric of measurement is worth to you). Still, early reports from this summer’s E3 suggest some of the issues that plagued the original may have been fixed,

Naughty Bear: Panic in Paradise will hit XBLA and PSN this fall for an as-yet-unannounced price; the newest trailer is below.