Some may have noticed a few new entries pop up in the achievement list for Ubisoft’s beat-em-up Scott Pilgrim vs. The World: The Game, which may point to the impending release of long-awaited and much-anticipated DLC for the popular title. Four achievements worth a total of 50 gamerscore have been added to the game and appear to be from the “Online Multiplayer and Wallace” pack.

A screenshot of the achievements, courtesy of @lifelower, outlines what you’ll need to do to nab that gamerscore: 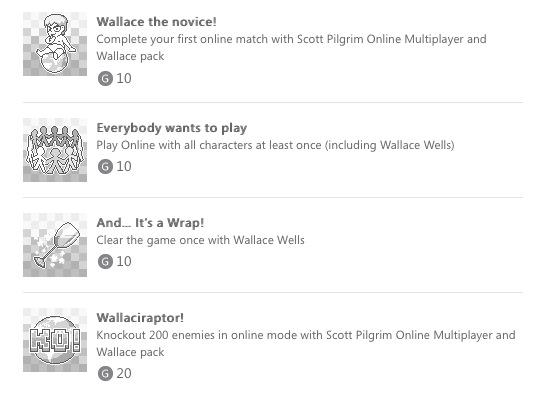 While this is hardly a confirmation of the DLC’s release, it definitely seems to suggest the pack is coming sooner rather than later. As the title suggests, the “Online Multiplayer and Wallace” pack adds much-desired online co-op for the brawler, which gives players the choice to play as the titular Scott Pilgrim or four (soon to be five) of his friends. The pack also adds Wallace Wells, Scott’s “cool gay roommate,” as a playable character; currently, he only appears as an NPC vendor in in-game shops.

The story of this particular piece of Scott Pilgrim DLC is a peculiar one – the “Wallace” pack was first announced in August, nearly two years since the game and any other DLC for the title had been released. That such a major content pack would release for a downloadable title so long after it was out of the limelight was odd enough, but the story didn’t end there; after the initial announcement on Aug. 7, the pack failed to meet its original launch date of Aug. 19, and was delayed “until the fall” before settling in to a nebulous “2013” release window, where it currently sits.

Scott Pilgrim vs. The World originally released in 2010 to coincide with Edgar Wright’s action-romantic-comedy of the same name, which in turn was an adaptation of Bryan Lee O’Malley’s critically acclaimed six-volume series of graphic novels. The game – like the film and comics – centers around Canadian slacker Scott Pilgrim, who must fight his way through the seven evil exes of his dream girl, Ramona Flowers, in order to win her affections. The franchise borrowed from classic video games, indie rock and shonen manga to become an unqualified success in the realm of independent comics.

Scott Pilgrim vs. The World: The Game is available on XBLA for 800 MSP, with the “Knives Chau” DLC available for 160. No official announcement on the “Wallace” pack’s release or pricing has yet been made.