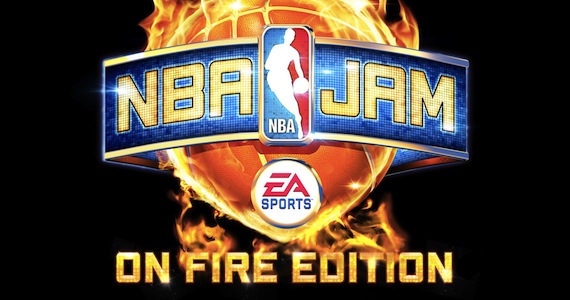 NBA Jam: On Fire Edition was developed and published by Electronic Arts. It was released October 15, 2011 and retails for 1200 MSP. 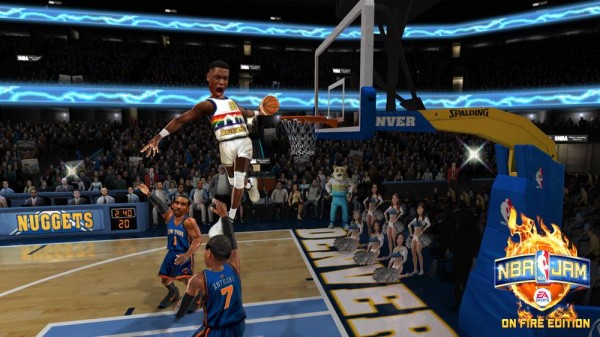 NBA Jam: On Fire Edition is the rebirth of perhaps the most influential arcade sports title of the early 1990’s. It brings two-on-two, run-and-gun basketball back to the forefront and we couldn’t be happier. For the uninitiated the game is an over-the-top arcade style basketball game. It includes famous NBA players, unlockable teams and characters, jovial commentary and insane slam dunks. While NBA Jam saw a reboot to the series with its 2010 retail release, On Fire Edition brings back all the things that made the series fun, then adds in a slew of extra content, all for 1200 MSP. It’s everything that you would expect from a reboot of a classic game series and more. Boomshakalaka!!!

More than a facelift – The easy route for bringing a game over to Xbox Live Arcade is simply to give it a graphical facelift and call it a day. NBA Jam: OFE adds a ton of content to the original formula without diluting the intent of the game. The updated graphics are a lot of fun with head shots of all your favorite stars. It occasionally looks awkward, but those odd moments are few and far between.

Classic touches – All of the quirky touches that made NBA Jam great back in the day are still here. Mascots jam alongside of other players. Big Head mode is unlocked right from the beginning. Those of a political ilk can settle their differences by pitting Republicans and Democrats against one another. Lots of past players can be unlocked for their respective teams such as Larry Bird and Shaq. The announcer is also back with all of his much beloved one liners. “He’s on fire!” has never sounded so good.

Intense action – Matches can really get heated and it makes them all the more fun. Gold level challenges really require concentration. But overcoming them and coming back from difficult situations is really satisfying. Once you get up to speed the toughest difficulties are the only place you will want to play.

Unlockables – Those looking to get their favorite players and teams will find that just about everything is here: Republicans, Democrats, several Mascot teams, Euroleague teams–heck, even the Seattle Supersonics. There are also several other teams to unlock, such as the SSX team. The choice of unlockable players is vast, too, if not a bit odd. We love Rick Smits and all, but why isn’t Reggie Miller the unlockable for the Pacers?

Challenges galore – In addition to the standard quick play feature there are two modes in NBA Jam: online  and Road Trip. Online is simply playing matches against random opponents. Road Trip is basically the game’s career mode. In it you have to beat all the different teams in bronze, silver, and gold challenges. Finishing all of these unlocks special platinum level challenges. The cool thing is that both modes have their own in game challenges which unlock Jam Points. These are used to buy all the unlockable players, teams, cheats and perks. Getting enough points to unlock everything will take some time, which means there’s always replay value.

Online opponents – Just having the option to play human opponents makes this a must buy. The online matches that we played were stable for the most part. Most players should find no problems with lag when playing over LIVE. Unfortunately rage quitters abound, but that’s true just about everywhere. 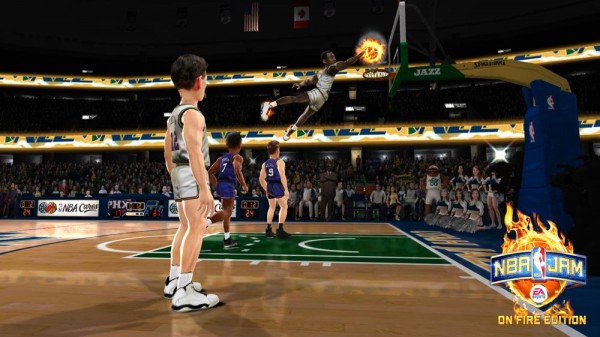 Crazy cheap AI – Even though NBA Jam: OFE is not a true quarter munching arcade game, it does trace its roots from such. As a result the AI is guilty of many old school sins. To say it’s a rubberbanding AI would be putting it mildly. You can build up large leads only to see them crumble in moments. At times the AI defense is so stout that you can’t even get past half court. There comes a time in most high level games where the shove fest from the computer becomes almost unbearable. Meanwhile wide open shots that you take inexplicably bounce right out. It’s all the dirty tricks you would expect from an arcade machine, and it can be very frustrating at times. Thankfully it can be (mostly) overcome as your skill improves.

Questionable DLC – The only DLC really available is for 400 MSP and it unlocks all the options in the Jam Store for you. This really feels like a cheap money grab to us, but there you go.

Follow the formula – This game is called NBA Jam. It is most readily recognized for its over the top jams. Oddly though, survival at the top levels depends on draining three pointers consistently and not dunks. In fact, dunks are routinely blocked even at the lowest levels. This forces the player to conform to a specific game plan if they want to conquer Road Trip. Ultimately players are free to play any way they like. But it seems to us that the most effective methods really do fly in the face of what NBA Jam is supposed to be all about. 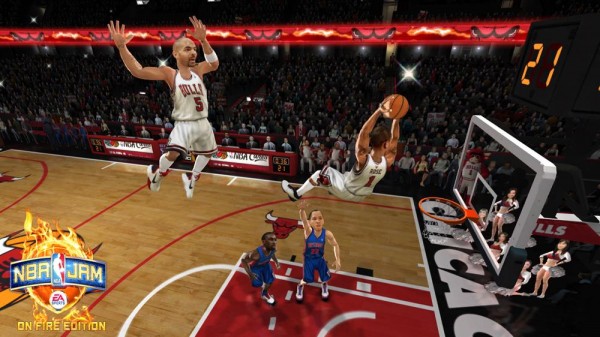 NBA Jam: On Fire Edition does just about everything right. The action is fast, intense and lots of fun. It’s one of the rare retro titles that isn’t just for fans from back in the day. Even the uninitiated will be immediately hooked. It’s an over-the-top caricature of what the NBA is and it couldn’t be more satisfying to play. Even after almost 20 years the NBA Jam formula is hard to beat.