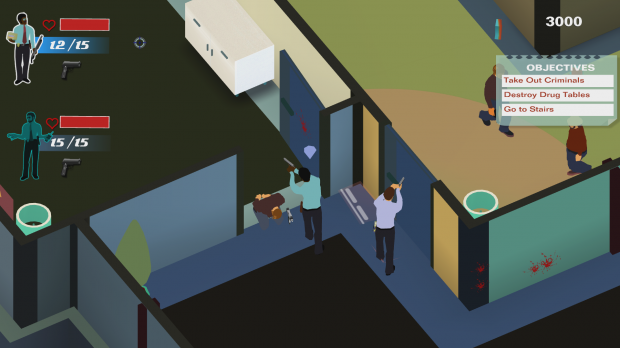 Simplistic controls and gameplay: With a basic “point and shoot”-style gameplay, LA Cops can be a quick pick up and play style of game. Leaving the difficulty on Normal can almost turn LA Cops into a run and gun shooter if you are so inclined. Increase the difficulty at all though, and you will have to be much more tactical and strategic to finish even the first level.

Weird, wild, and crazy story: In my first play through I will admit that I skipped most of the cut scenes and went straight into the action. During subsequent play throughs, I took the time to watch and listen to the story play out. Let me tell you, it is well worth it. The interactions between the detectives are classic, humorous and add a lot to the overall experience of LA Cops. 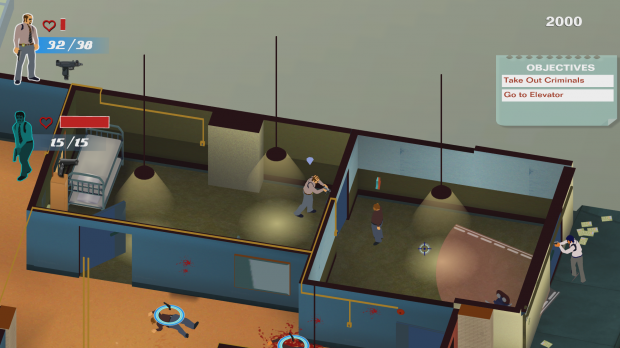 AI advantage and accuracy: If giving the opportunity, the AI in LA Cops appear to be able to shoot around corners and through doors. While players have to shoot a door to destroy it in order to shoot the criminals beyond the door, the bad guys are able to shoot through unopened doors, giving them a huge advantage if you do not sneak up on them. The AI is also an extremely remarkable shot as I have been hit and killed from all the way across the screen with a single pistol shot. I was unable to duplicate the same feat with any weapon.

Feels like a phone app: At its core LA Cops is very basic. Basic controls, basic settings, and very simplistic graphics. This makes it almost feel like it doesn’t belong on the Xbox One or even played with a controller. While playing LA Cops, I often thought how great it would be on a touch screen.

No replay value: With all the above difficulty issues and having only a one player offline mode there is very little reply value. There is a leaderboard that you can use to compare your times and scores with others, but that is not enough in this age of online games. Why two-player local or online co-op is not offered in LA Cops, I do not know.

I am very conflicted about LA Cops. While it was a fun, interesting gameplay experience, and the cut scenes are pretty hilarious, it was very frustrating to play a game that feels like it was built for a 10″ screen on a 60″ screen in my living room. I love a good challenge – I have played every Call of Duty game on veteran difficulty numerous times – but I do not see going back and playing LA Cops on anything but normal. The higher difficulties are much more tactical and almost have to be played as a highly stealth type game rather than the 3D top down shooter that it is. While I think LA Cops should be picked up by the hardcore gamer that just has to play everything that is released, overall I there are too many barriers – price being the main one – that will keep the average gamer from picking up and being able to enjoy this game.