Mini Ninjas Adventures, the Kinect focused XBLA follow-up to IO Interactive’s family friendly action-adventure, should be hitting the marketplace this week. To get some insight into the games production, specifically the audio, I recently spoke with the games Composer and Sound Designer, Yarron Katz. 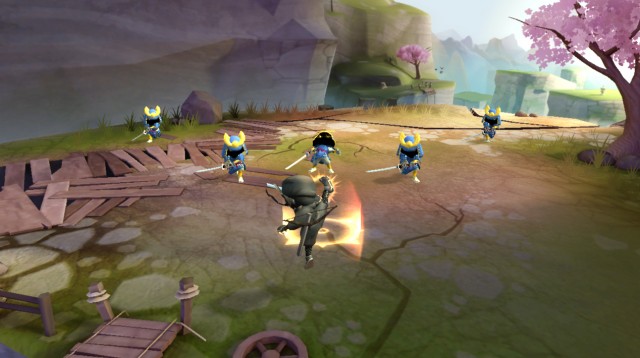 Could you tell our readers a bit about yourself? What is your background, what sort of things have you worked on prior to Mini Ninjas Adventures?

I grew up loving music and computer games. From a young age I’d listen to classical music and my imagination would go wild with adventures. I always wanted to get people to experience the same enchantment I felt and wanted to compose for orchestra but never had the option to do learn it. Then in High School I found an abandoned hard drive that had a really old-school music program called Modplug Tracker, that was all it took. Now, I’m the founder of Sonic Brilliance Studios. I’ve been making the music and sounds for AAA, smartphone and online games. As well as commercials and presentations. I’m also a college lecturer on music and sound design for games.

What’s your role on Mini Ninjas, and what does it entail?

Basically I’m known as “the sound guy”. Not so basically, I’m the composer, sound designer and voice actor. Usually you’ll have different people for the different tasks, but I ended up doing all of them. In hindsight I have to wander what the heck I was thinking. Needless to say I ended up having a lot of sleepless nights and Red Bull to keep me going.

Are there any major differences making music/audio for a downloadable game over a retail game? For example do you have to think about size restrictions at all?

There are a couple of differences but I’d say it mostly revolves around budget. A higher budget can have its niceties, such as hiring live musicians instead of using software. Nowadays even iPhone games can earn enough to have companies hiring orchestras for the soundtrack. But there is also a downside to it. A higher budget usually means more people involved meaning more pressure with time since delays starting at the top of the line can mean longer delays once it gets to the bottom. And since the sound guy is the last in the chain, it’s up to him to catch up for everyone else. Also you’ll find that the higher the budget the tighter the restriction on trying something daring and new. When there is a lot of money to be lost, you find people generally want to err on the side of what is known to work. Thankfully Mini Ninjas is part of a young and growing medium (gesture based) so it meant having the freedom to go for innovative ideas. Although my suggestion to have the Samurai say “Wax on… wax off” was quickly vetoed.

On the other hand a smaller budget has its own pressures, by being forced to make the most out of the limitations you have to work within. Maybe they might not be able to afford much music so you have to create something effective and evocative in a much shorter piece. Or for example the music for Mini Ninjas was mastered in L.A to ensure top notch quality control. A tight budget indie game might not be able to afford that luxury. 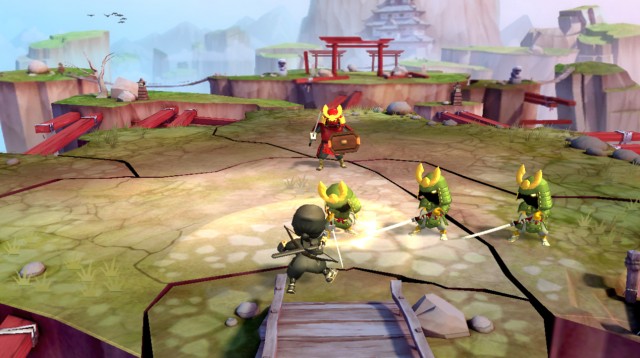 Regarding size restrictions, I remember at one stage due to internet speed, the accepted standard was Mp3 128kb/s. Gradually that standard went up in quality as internet became faster. Then iPhone games hit the market and most people try keep their games under 20mb so we’re back to minimizing. Now you’ll see games with sound quality as low as 96kbs in MONO to keep things down. The argument being since it’s coming out of a tiny iPhone speaker anyway it’s going to be degraded. Maybe so, but those who want to enjoy the full experience on a set of headphones are definitely going to feel the loss.

You would think that retail games wouldn’t have such problems but depending on the console and the engine the game uses, larger size files can affect performance and per usual when it comes to killing quality for performance, audio is first in line. So you just suck it down and work that much harder to get it sounding as top notch as possible before the squeeze. Thankfully though it’s becoming less of an issue.

Since Kinect has very little physical feedback, do you find yourselves using sound to a greater extent to relate information to players?

Ross, you hit the nail on the head! The sound becomes of exceptional importance. In Mini Ninjas since you are using your whole body to fight off the dangers you’re going to be focusing on the enemy in front of you. That means relying on sound to know what the enemies that you can’t focus on are doing. As such you need sounds to clearly indicate every action the enemy does. A grunt will mean they are lifting a rock to toss at you, or chanting means a wizard is casting a spell on you. Sound becomes tantamount in these situations so you can react accordingly.

Are there any other aspects of Kinect that change the direction of music and sound?

Yes, voice command in games. Mini Ninjas Adventures does take advantage of the feature, and it means that you can’t use any sound effects that could activate a command. Suppose you have a voice command that when you shout “Kiyaaaa”! you use a power up. If you have a sound effect in the game of an enemy going “Kiyaaa”, when that sound plays, the Kinect voice recognition will hear it as a command and activate your power up. Not what you want. So you have to make sure that any sound effects aren’t part of the recognized commands and vice versa. This will clearly impact the direction of sound as voice activation becomes a bigger part in games.

Another aspect is this: Since Kinect is gesture based, music becomes of tantamount importance to instill the games vibe. Sticking your arms out like Superman and moving left and right might leave you feeling stupid. But if the music is there to immerse you in the world, you’re not some fat dude playing Kinect alone on a Saturday night anymore. You’re a flying superhero saving the world! So where music has always been important, Kinect has made it even more important to capture the voice of the game to really make you fly. 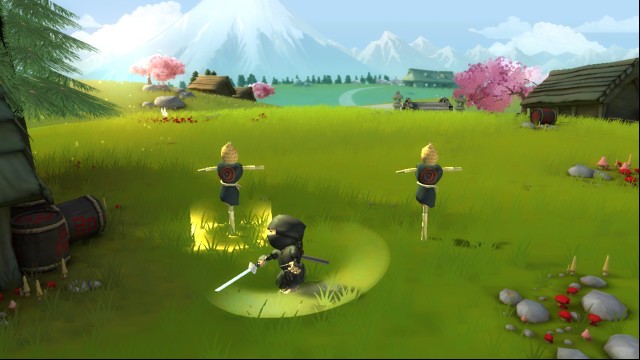 What sorts of things have inspired the direction of the music and audio in Mini Ninjas Adventures?

Now that’s a big question in a short sentence. The first aspect is actually the previous Mini Ninjas game. Peter Svarre, the composer for it did a wonderful job giving the game its identity that everyone connects with. Some composers might choose to redefine themes into the way they see it, but I had the game and its fans in mind. I didn’t see any need to fix what isn’t broken so we kept the original main theme to keep the franchise continuous so fans will feel immersed in the world right from the get go.

The second aspect is where everything changes, the gameplay. The original game was more of an exploration adventure game. This one is a dynamic non-stop action game. That meant a complete shift in gear musically. I spoke earlier about how the music needs to be more immersing, and in Mini Ninjas Adventures you are playing the part of a Ninja fighting against waves of enemies coming at you. So I had to create music that’s extremely driving and pulsating, with a sense of danger. At the same time it needed to fit in with the visual character and moods of the different worlds.

As for the voice acting we also kept the voice style for the small samurai from the original game since they are already so well defined and changing them would have just taken away that character. The big samurai on the other hand didn’t have much to say in the first game so I created their identity with an authoritative but humorous color to maintain their quirkiness.

The direction for the sound effects needed to be defined based on the audience. It’s a game for all ages so obviously it can’t sound too violent when an enemy gets hit and meets their demise. But it still needs to capture the urgency involved so everything has to sound bold, distinct and serious, but cute serious if you get what I mean.

Big thanks to Yarron, you can find his work at SonicBrilliance.com, Mini Ninjas Adventures is set for release this Friday June 29 for 800 Microsoft Points.