Just Shapes and Beats preview: Get the party started

Just Shapes and Beats preview: Get the party started

Plenty of good party games have been released over the years. However, outside of the Rock Band or Guitar Hero franchises, there aren’t many games out there that will actually provide the soundtrack for your party. The aforementioned games may get people singing together, but what if you want to add some more energy to the party and get everyone dancing instead? That’s where a game like Just Shapes and Beats from Berzerk Studios comes in. Just Shapes and Beats will not only provide entertainment to those playing it, but it may just cause a serious dance party to break out as well.

Inspired by the music

I had never listened to Danimal Cannon, a video game composer and chiptune music performer, before playing Shapes and Beats. Apparently neither had the developers from Berzerk Studios before they picked up a CD of his at GDC a couple of years ago.

Mike Ducarme, “Word Wizard & Coder,” for Berzerk, told XBLA Fans at PAX Prime last month that when his partner bought the CD “it was an impulse buy. He didn’t know what he was getting into.” But after listening to the CD he decided that it was such great music that he needed to make a game about its songs. It was “just too great for people not to know.”

A year later he went to a game jam, built the first level and it pretty much just took off from there. 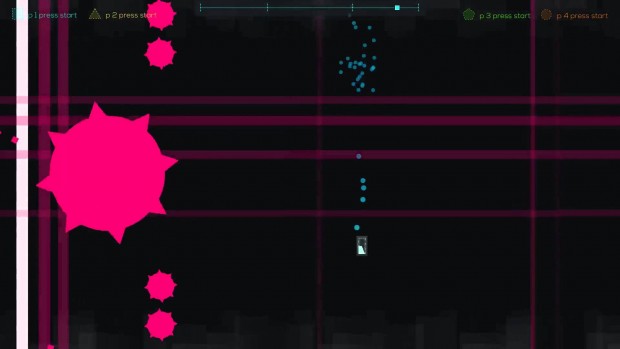 XBLA Fans didn’t actually have an appointment to see Just Shapes and Beats while at PAX. We were at another appointment when we heard loud cheering and clapping coming from a nearby booth. Our curiosity was piqued, so we took a walk over to see what all the hoopla was about.

Four people were gathered around the screen playing as different colored squares darting across the board trying to avoid being attacked by pink enemies of various shapes and sizes.

The mechanics were pretty simple — just keep darting around the screen and don’t get hit. Of course, as the level progressed it got harder and harder, and eventually we came across a boss that not many people were able to defeat.

So why were all the people cheering? Because they wanted the party to keep going. If you die, then the music dies. The longer you stay alive, the longer people get to rock out to the music. The music is so energizing that it gets not only the actual players, but also the people surrounding them so hyped that they just don’t want it to end.

If you want to get in on the party then you’ll have to wait a little while longer. Just Shapes and Beats doesn’t have a firm Xbox One release date yet, and it will come to PC first in June of next year. 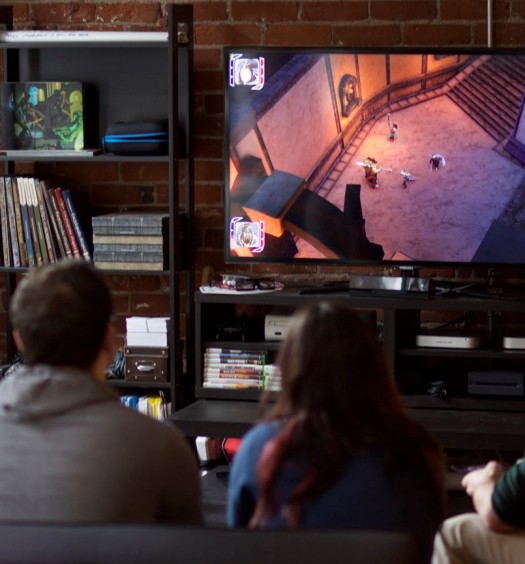