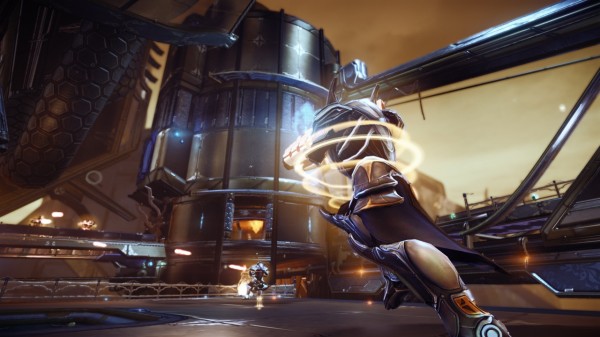 XBLA Fans: Can you give us a brief overview of Nexuiz and the teams working on the game?

Kedhrin Gonzalez: Sure! Nexuiz is an Arena first-person shooter game. That means the game is fast, twitch-style and very competitive. The game features nine maps, nine core weapons, and a new Dynamic Mutator mechanic. We at IllFonic are a team of 9 core developers that breathe, eat and sleep Nexuiz! We’re a solid team that believes in pushing ourselves hard.

XBLA Fans: What made you decide to develop Nexuiz for your first game?

KG: We actually first started with another project, Ghetto Golf, but had to put it on the backburner. Instead, we decided to take a trip down nostalgia lane with an Arena FPS game. We were fans of the Classic Nexuiz released by Alientrap in 2006 and thought it would be cool to give it a reboot for the new generation of gamers to experience what Arena first-person shooters are like. Also, we really wanted to take on a new art style with the game.

XBLA Fans: The game seems to closely resemble some of the classic arena shooters (Quake and Unreal) did you draw any inspiration from these games?

KG: Of course! Quake started it all and we drew inspiration from Unreal Tournament too. We are fans of the genre because of those games. We understand what those games meant to fans and with Nexuiz, we are trying to bring a fresh experience while staying true to the Arena FPS genre.

XBLA Fans: Describe the overall gameplay. Do you consider it more run and gun or tactical?

KG: At its heart, Nexuiz is all about skill. It’s run and gun, shoot or be shot. However, Nexuiz is the first in Arena FPS to integrate an overlaying strategy with Dynamic Mutators. Although they seem like they are 100% random, players do have the ability to influence the mutators through the Dynamic Mutator store. Save your points, spend your points, adjust your Dynamic Mutator spawn rates. This type of team-based gameplay has never been seen before in an Arena FPS.

XBLA Fans: Describe some of the weapons and environments we will see in Nexuiz.

KG: Nexuiz has nine weapons immediately accessible to the player on every level. Weapons are split up into two types of ammo, cell energy and munitions. You spawn with a shotgun, and it’s a pretty decent weapon. You don’t have to go get a better weapon, should you be engaged with an enemy. There are also weapons like the Rocket Launcher, which lets players control rockets during flight and detonate them at any time. This can lead to some really cool situations. Most of our weapons have splash damage too. Of course, we control weapon balance server side, so we don’t have to patch the game to update weapons.

Nexuiz also has three distinct environment styles. Two of them, known as Kavussari and Forsellian, races in the game, are more metropolitan with large structures and cityscapes for epic battles. The other style, AtaVirta, is based off a planet that was destroyed by the Forsellians. It features drop hazards, where you can fall to your death, and open gameplay.

XBLA Fans: What made you decide to go with CryENGINE3 for the game?

KG: Nexuiz originally used a modified Quake engine called Darkplaces, by Forest Hale. However, with the demands of making a current gen game, we needed something that can really push the envelope. We saw CryENGINE 3 at GDC 2010 and knew we had to get it. From capable tools to excellent artwork production, it has been a pleasure to with the engine.

XBLA Fans: What makes Nexuiz different than the other shooters available in the market right now?

KG: A lot of color and it’s not in a desert! Just kidding, the biggest things Nexuiz has going for it are the Dynamic Mutator System, the frantic action, intense visual feedback and beautiful graphics. It’s the rebirth of a subgenre. FPS games have been slowing down a lot, so we decided to turn the speed back up.

XBLA Fans: Let’s talk about multiplayer will it be online only or will split screen be an option?

KG: Nexuiz is online only, however we do support offline bot training. There will not be a split screen option.

XBLA Fans: How did the game get picked up and published by THQ?

KG: We were shopping around to see if we could get a publishing partner that understood us as a developer and appreciated what we do. We had some meetings through our agent and all of that jazz. THQ turned out great. They’ve been amazing to work with!

XBLA Fans: How did Nexuiz become a part of XBLA’s House Party promotion.

KG: We submitted it to Microsoft alongside a bunch of other games from other talented developers. We know not everyone gets in and are truly honored to have been selected for the promotion.

XBLA Fans: Describe how Illfonic got its start and how the team was assembled?

KG: It started with Chuck, Raphael and I over the Internet a slightly more than four years ago. We knew we wanted to bring a game to the frontlines, but weren’t sure how to get there. After a long struggle of fund raising, we finally were where we wanted to be. It wasn’t easy, but it has had its fun moments! After hiring some past connections, as well as graduates from the Art Institute and Full Sail, we finally had our team.

XBLA Fans: What kind of future projects will you undertake?

KG: Ghetto Golf is next for us. It’s going to be awesome.

XBLA Fans: If we could only choose one XBLA game to play this summer, why should we choose Nexuiz?

KG: Because you want to tell your friends you really are good at FPS games.

XBLA Fans: Finally, what are some of the games (XBLA and any other) the team is playing right now?

KG: The guys play a huge variety of games – Minecraft, League of Legends, Anno, Starcraft 2, Skyrim, Rage – the works! We are mostly PC gamers, but we do love us some Castle Crashers, Castlevania HD, and the other House Party titles too, of course!