Hydro Thunder Hurricane was developed by Vector Unit and published by Microsoft Game Studios for XBLA on July 28, 2010. It retails for 1200 Microsoft Points. The original Hydro Thunder was a favorite in local arcades during the late 90s. The rush of boosting a fantastical speedboat through intense waters and hitting massive jumps struck a nerve in me that most other arcade games failed to do. For those with fond memories from the arcade excitement peaked when a new Hydro Thunder was announced for Xbox Live Arcade, developed by Vector Unit.

Hydro Thunder Hurricane, the first true sequel to the original arcade game, manages to reignite old love for the arcade original. When it comes to the basics, Vector Unit nailed the feel of the original, from the crazy courses down to the way the speedboats handle. Every speedboat that from the original is in HTH, and the inspired courses will evoke feelings of familiarity from Hydro Thunder veterans.

Of course, neat graphical touches remind us that the Hydro Thunder series has been improved quite a bit since the arcade days. Things like dynamic wave effects look awesome in high definition on XBLA, as do water droplets that form on the screen after a gnarly jump. Each boat now has a cool transforming animation once its boost is active. Seeing  boats transform from their standard appearance to reveal massive exhaust pipes that spew fire provides a lovely and empowering feeling. 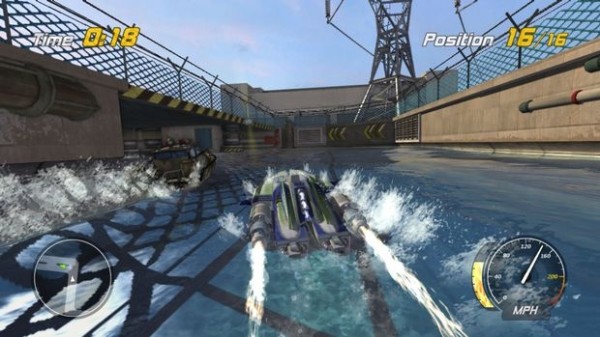 Classic arcade feel – Vector Unit captured one of the best things about the original Hydro Thunder in that the tracks all feel like crazy theme park rides. The amount of scenery and things happening around you in each course is exciting and over-the-top, along with the huge jumps you’re constantly hitting. Making the final run to finish line still adds that list bit of adrenaline, with the feeling of relief when it’s all over. It really feels like the classic arcade experience, and the fact that HTH looks so good now on XBLA is a satisfying bonus. Fans will feel right at home when playing this game.

Great multiplayer – Besides its crazy level design, Hydro Thunder’s best feature was its intense multiplayer action. While the ported console versions suffered a bit in this area since they lacked the obvious arcade atmosphere, HTH makes up for this by adding some excellent multiplayer support. Up to four players can play via splitscreen locally with up to eight over Xbox Live, or any combination thereof. This adds quite a bit of lasting value to the game, and makes it a great game to play with people who don’t necessarily play many video games. Leaderboards can also add to the competition between  friends on Xbox Live, but it would’ve been nice if they tracked more than just fastest times for each course. 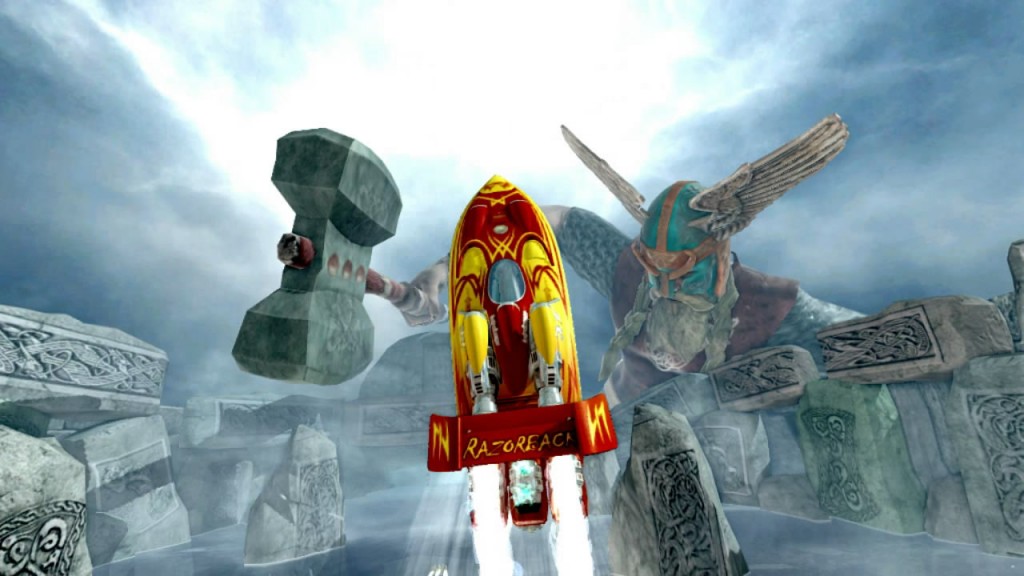 Not all game modes are that fun – Vector Unit wanted to make the game last longer and have better replay value, but a couple of the modes besides the basic race just aren’t that much fun. Quickly and carefully driving through rings or navigating a gauntlet of explosive barrels just doesn’t have the same appeal. While these modes certainly have their uses, like showing you shortcuts that you may have never found, they just aren’t as much fun as racing. What’s there is decent enough, and should keep hardcore fans and completionists entertained for a while.

Poor sound effects – For such powerful looking speedboats, the underwhelming engine sound effects were very disappointing. Instead of sounding like monstrous speedboats with jet engines, they sound more like really powerful vacuum cleaners. The soundtrack is also sadly forgettable. There are some decent tracks to race to, but most aren’t memorable enough to stand out after the game is turned off. The new announcer in HTH can also be a lot more annoying than the old one. Thankfully he’s rarely heard. 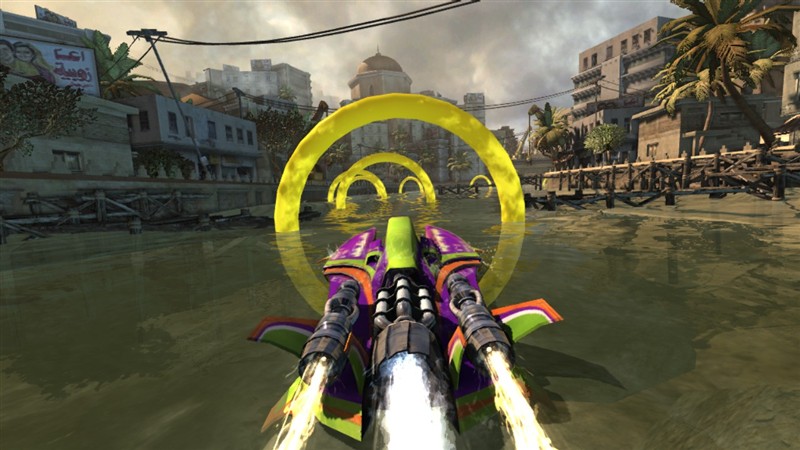 Hydro Thunder Hurricane is a great arcade racer that will definitely appeal to fans of the original arcade game, but for everyone else, 1200 Microsoft Points is a tough sell. For people on the fence, rest assured that the classic arcade feel of the original is intact, and the multiplayer features can potentially add a great deal of time spent with the game. It’s a nice looking game with pretty water effects, and the ridiculous speedboat and course designs help keep things interesting. To find out if the game is for you, just simply try the demo. Based on your feelings from playing the demo, you’ll know right away if HTH is right for you or not.

Hydro Thunder Hurricane is one of those games that I keep coming back to even today. It’s a true sign of quality when you continue to play a game long after the rush of getting the achievements is gone. It’s pure fun from start to finish. Unlike Todd I felt the audio for the game was superb; gas-based boats have a deep rumble that sounds great with a subwoofer, while jet-based boats have that futuristic turbine sound. The music is also strong, but as Todd said isn’t something you’ll be wanting on an iPod. The 1200MSP price may shy a few folks away, but the game is often discounted and has a very hefty DLC pack for 400MSP. I highly recommend both the game and the DLC for a total of 1600MSP, but those with tighter wallets should wait for the game to go on sale again. Either way it’s a must buy for every gamer.