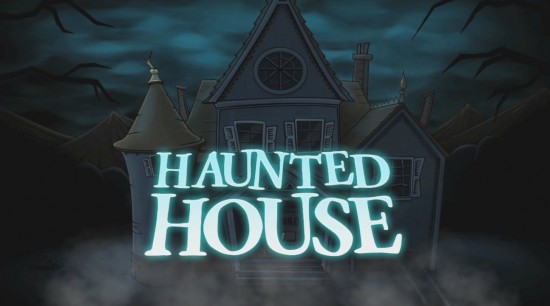 Expanding on a classic – While the original wasn’t groundbreaking by any means, it is another Atari gem that some will fondly remember as being inexplicably scary as children. The remake takes the classic elements of the game and adds multiple ways to light your way such as lanterns, cell phones, and flares. It even adds some weapons such as the “Eye of Sour-On” and other mystical items. Now you don’t always have to run away from the evil that roams the halls. 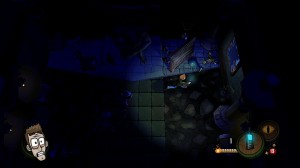 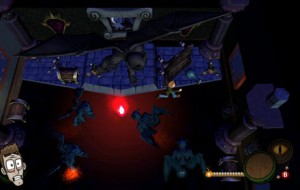 Spooky Sounds – The soundtrack and effects are well-suited to the game. Babies crying, evil laughter, and creaking noises are heard as you walk, sometimes in darkness, through the house. It truly makes the house sound haunted.

Multiple checkpoints – Fireplaces are scattered throughout the levels. Lighting these will give you an illuminated zone of healing and kill any monsters in range. As this game may appeal to younger audiences, it’s good to have respawn points that are immediate and don’t cause you to repeat steps. That’s good for any audience, really. Just don’t count on starting there if you end your game. Your game always restarts at the beginning of the level you were on. However, this is actually a good thing as you will see.

Lantern confusion – In searching for items, you will come across different colored lanterns. Some walls (indicated by a sound of chimes as you walk by) can be walked through with certain colors. In at least two occasions, I encountered a scenario in which I could not advance because I left a lantern in a room that I needed that lantern to enter. You see, you can exit the room with or without the lantern, so if you do not get what you needed in that room or if that room leads to the exit you are screwed. You will have to end your game and restart the level. While the levels aren’t long, they can be more confusing near the end and this issue could have been avoided by needing that lantern to exit, or just being able to carry more than two items.

Short and simple – There are 16 levels and 4 bosses. That’s not a whole lot, and the gameplay is pretty much the same through the whole game aside from getting a few good weapons in the last levels. For the first half, you are mostly running away from ghouls and lighting matches. The boss battles don’t even have you battling the bosses directly, but it’s more of just surviving a slew of normal enemies at once. You aren’t even sure when the fight is over until it cuts to you getting another piece of the urn.

It’s great that XBLA is bringing classic games to new audiences and taking the basic concept and expanding it. While this game is done well (aside from the aforementioned lantern issue) it doesn’t offer a whole bunch of novelty and certainly doesn’t try to be frightening with its cartoon-style animation. For 800 M$ points, or about $10, you get a game experience you can finish in under a week. You might want to save that dough for a major console release, but if you really want to give this retro-remake a try you probably won’t be disappointed. You just may not be super excited with it either.

Virtua Fighter 5 Final Showdown on its way Next Summer