In the independent gaming space, there have been a lot of games seeking to go back to the glory days of retro style and “NES hard” games. Some choose to opt for a remix concept, blending old fashioned difficulty with new-world features like automatic save points. Others choose to go completely traditional for the sake of integrity, looking to match the brutal difficulty of original Nintendo cartridges. GunWorld 2 is the latter.

GunWorld 2 picks up after the events of the previous game. Dwayne has gone into seclusion after beating the bad guys to get away from it all. Unfortunately, President Eagle is now being hunted down and needs to find Dwayne on Gunworld for his help. The game kicks off with a tutorial where the player takes control of President Eagle to learn all of the necessary moves, then switches over to Dwayne exploring the game’s hub town. 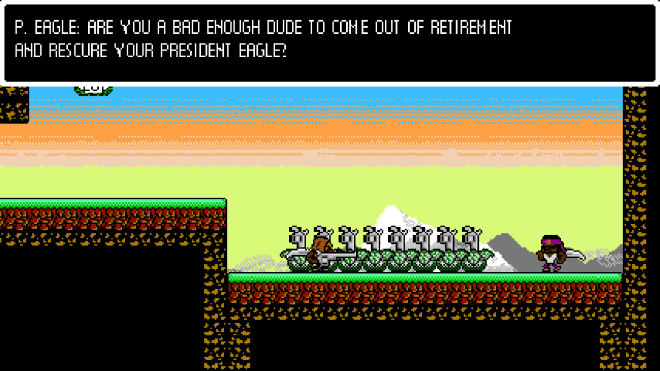 A pure love letter to vintage Nintendo game with minimal modern features – GunWorld oozes with old-fashioned charm, from the 8-bit crunchy pixel art and chiptune soundtrack to the heavy influences from Mega Man series and Zelda II in some of the game’s design choices. Modern features are minimal, though there are things like being able to save immediately in town without the need to search for a save point and offering speed-run and co-op modes to the game. If action platforming that can occasionally be tough as nails sounds interesting, this game has it by the spades. If the player doesn’t care for the RPG element of the game, GunWorld 2 even offers an “Old-School” mode that’s a linear Mega Man-styled experience that lets you play the stages back-to-back without the questing aspect.

The developer is active in the community and updating the game for balance and bug fixes – There is one benefit to modern day games compared to old Nintendo cartridge games: the ability to patch and update them after they have been released. While it isn’t strictly by the book for an old fashioned game like GunWorld 2, Joe from m07 Games has been actively listening to the to players via social media and adjusting the game via patches. While some changes are bug fixes, many of them are difficulty adjustments to make the game a little more fair. For example, during the period of this review there was a patch that changed the pricing of the Squid of Returning (which returns Dwayne to town from wherever he is) to a lower cost, making it a little easier to stock up and the burden of buying them less stressful. The detailed patch notes can be found on the m07 Games site for those who want to see exactly what has changed. 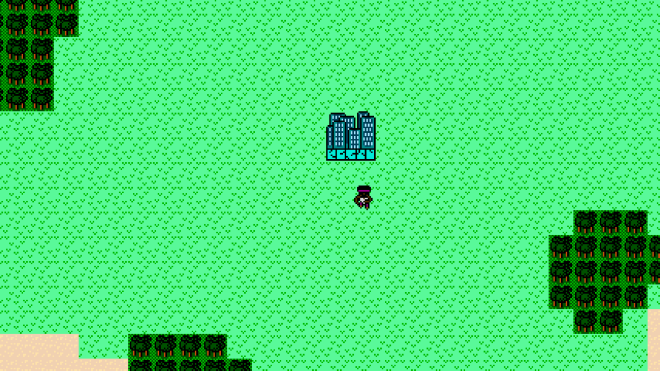 User interface does not present info in a clear way some times – While GunWorld 2 has chosen to take inspiration from Mega Man and Zelda II, there are moments where the interface isn’t detailed enough to keep the player informed. For example, each time Dwayne levels up brings a percentage increase of damage and (in some cases) an extra life point. Unfortunately, when the player wants to check how many experience points are needed to level up, there’s no metric for it. In addition to that, the level up notification is just some thin white text that pops up over Dwayne’s head that could be missed in all of the action. The ammo counter on the top of the screen is represented by five ovals, but depending on the gun that could mean different things. The Gold 505 (Dwayne’s starting gun seed) has an ammo capacity of 9, 8, 8, 8, 7 bullets, while another gun may have a capacity of 3, 2, 2, 2, 1. The player ultimately has to be mindful of the capacity whereas a Mega Man styled ammo bar with each tick representing one bullet would have been easier to keep track of.

Difficulty can be a little jarring – With a lot of retro tribute games, difficulty can be a limiting appeal factor; GunWorld 2 is no exception. The player is given limited life points for Dwayne, but stages typically don’t provide chances to get restorative items. Should the player die in the middle of a stage, they must start over from the beginning. Add in to the mix that the player loses ten percent of their gold upon death, and it can become frustrating if the player was hoping to save up money to get a quest-related item from the town store. If they want to try to ease their financial burden, the player can choose to take time and grind out money to stock up on items like the previously mentioned Squid of Returning or the Recovery Eagle, which activates upon death and respawns Dwayne out from harm’s way. However, the grind of repeating a level over and over just for gold could end up driving the player to consider just playing the “Old-School” mode and skipping the RPG component altogether.

Some game play components are a little disjointed – While GunWorld 2 drinks from the nostalgia pool heavily, there are some points in the game play that make it almost harder than the games it takes inspiration from. The tutorial stage description of the knife attack mentions that it can be used to cut vines and break armor and equipment off of enemies. Most players would feel that if it’s good for those tasks, you should be able to use it to take down enemies as well in order to save on ammunition — no such luck. Sometimes it can’t even do what it promises: In one level where there are axe-throwing armored knights, the knife does absolutely nothing to these enemies’ armor. Another game play feature this reviewer found odd was that when Dwayne gets hit by an enemy, he gets a short time with invincibility frames, but unlike Mega Man games, touching spike tiles results in immediate death. Finally, there are points where the player is given specific instructions on how to progress, but there’s no way to revisit what was said if you come back later. To add a little more salt in the wound, there is even one NPC in town that remarks “If you have trouble, you should look up hints on the internet”! 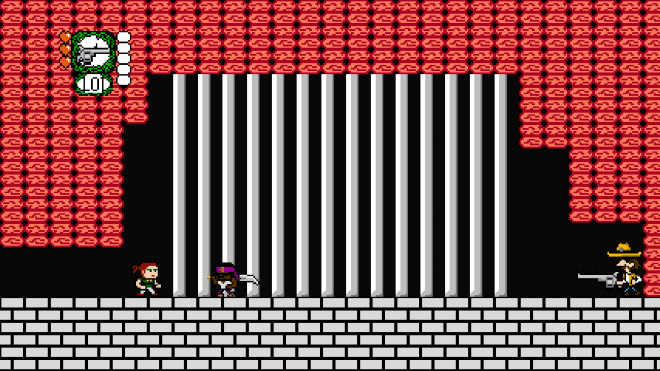 While GunWorld 2 is a project of passion stemming from the reverence of old Nintendo games with a lot of heart and charm, it may ultimately limit itself to a small audience due to what may be seen as a steep difficulty. The visual design of the game definitely goes back to the games it takes inspiration from, but there are aspects of the design and game play that could be refined. There isn’t any other way to say it — this is a game purely for the faithful who want a return to the days of old-fashioned hardcore Nintendo games. Folks who like modern day advances such as auto-saves, adjustable difficulty and the like should probably skip this if they want to keep their temper under control.