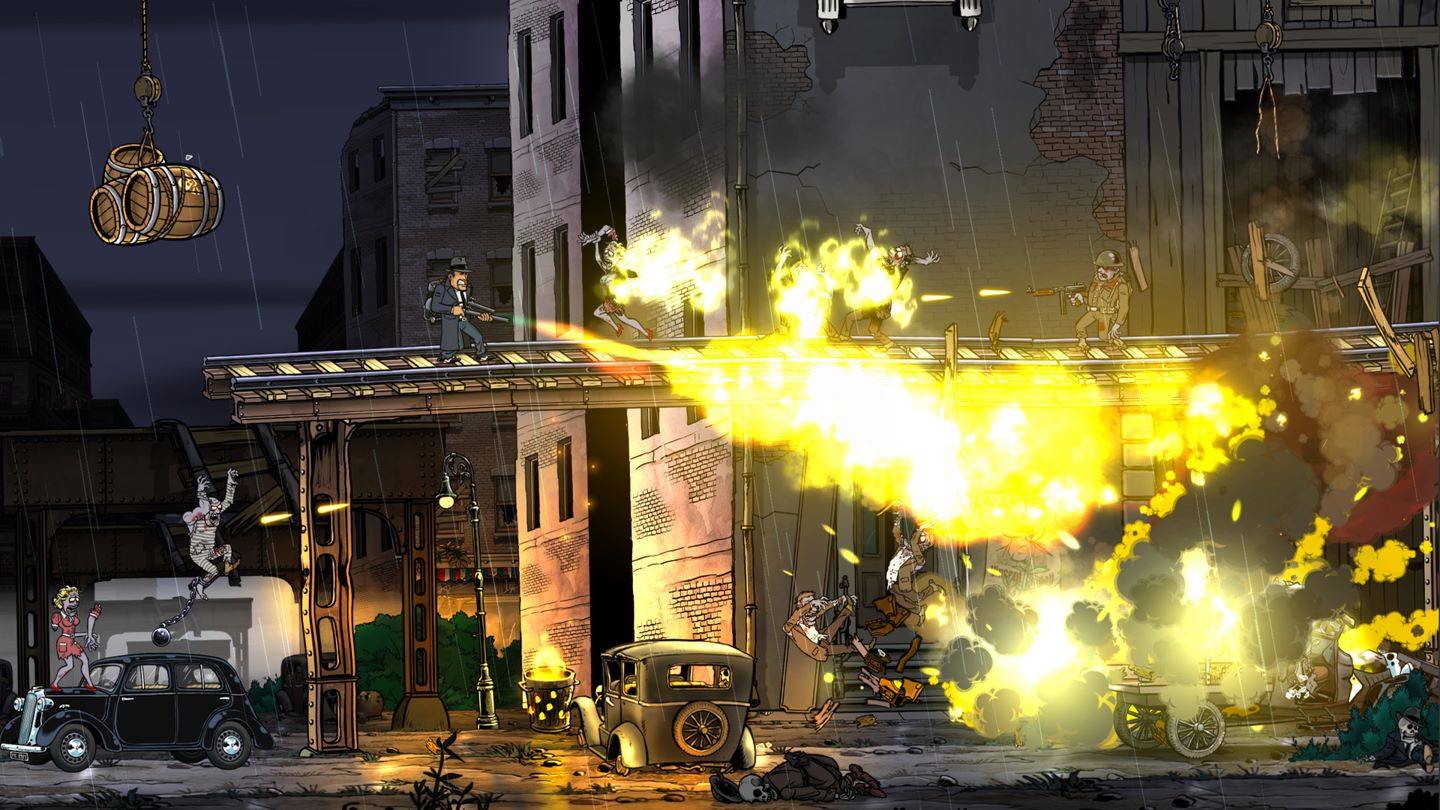 Guns, Gore and Cannoli 2 Review: Not a Game to Fuggedabout

Guns, Gore and Cannoli 2 Review: Not a Game to Fuggedabout

Taking place 16 years after the original game, Guns, Gore and Cannoli 2 brings players to the 1940’s. After the events that happened in the fictional location of Thugstown, players once again take the role of Vincent Cannoli whos being held captive by mafia thugs working for the mysterious Dark Don. Quickly freeing himself from the imprisonment, Vincent works towards finding the mysterious Don and learning what the Don wants with him. Vincent must fight through countless mafia men, zombies and soldiers among other enemies on an adventure across various locales. The game features four-player co-op either local or online. Much like the original game, players start at one end of the level and need to make their way to the other end. The game works as a side-scroller, but some levels do feature verticality that will require Vincent to scale up buildings or mountainous areas.

Thankfully, Vincent’s new maneuverability helps the game feel more polished. Vincent can now double jump, as well as roll. He can also jump once and roll in mid-air which becomes really useful against some enemy fire. Vincent will recover all the weapons he had in the original game over time, as well as pick up a few new weapons relative to the time period. The ability to kick enemies can give you some much-needed space and even knock them into environmental hazards. Various objects around the world can be shot and dropped on your enemy unsuspectingly. Any explosives that hit Vincent can propel him high into the air which makes dropping a rocket on a group of enemies feels really slick. All these new elements make the game a lot of fun.

360 Degree view – When you think about the original Guns, Gore and Cannoli, what is the biggest issue that comes to mind? One of the biggest issues revolved around the camera. In the original game, Vincent was not able to look up or down. He was only allowed to shoot what was on his level to the left or right of him. This was an issue in many areas where the player was required to jump up or down to areas where enemies were present. You weren’t able to kill an enemy till you got on their level, and by then, you’d most likely already had taken damage. This issue is corrected in the second game by giving the player 360-Degree aiming with the right stick. This allows Vincent to be more combative to higher and lower enemies.

Zoomed Out – Yet another issue that the original Guns, Gore and Cannoli had was just how close the camera was to the player. Sure, in the original game there were a lot more close quarters areas, but the problem lied in the fact that enemies were capable of shooting Vincent before they were ever on-screen. It can probably be argued that this helped keep the surprise of just what was ahead of the player, but it had lead to frustrating trial and error in levels from unsuspectingly running into a large group of enemies you’d almost have never seen coming. Guns Gore and Cannoli 2 zooms out the camera angle quite a bit giving the player a larger scope of the area around them. This helps the player see what all is ahead, as well as who or what is coming from behind which leaves the frustrations from the original game trailing in the wind.

Comedic Value – Guns, Gore and Cannoli 2 strives on its simple run and gun mechanics and witty one-liners that come from Vincent and other characters. The game does well to push the funny meter up to 10 this time around by pushing the comedic value of the entire game so far to point break. If the one-liners weren’t enough, the second game pushes to add hilarity with various puns made throughout the game against various enemies and weaponry used. Even actual historical events become a tad absurd, such as World War II’s D-Day where Vincent takes on the entire Nazi army. The game features various references to popular movies and music. All these additions help the game feel like more than a mindless run and gun shooter. 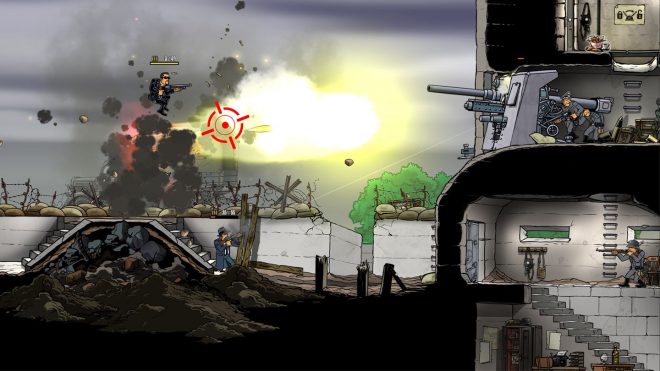 Confusing Controls – There are only so many times you can tell yourself that the controls will just take some getting used to. Some functions such as jumping work just as they should, the only oddity being that jump is tied to the left trigger instead of the A button. Other functions such as switching weapons are where the controls start to get confusing. Players need to hold the right bumper and use the right stick to select the weapon from a circular wheel, letting go of the bumper once they’ve made their selection. The game also allows the user to press the right bumper and use the right stick to select their weapon of choice. The menu will only disappear once the player presses the right bumper again. In intense combat situations, mistakingly pressing instead of holding can really mess you up. The game also allows the player to switch weapons by pressing Y, but each press scrolls through the next weapon in the inventory. This method is similar to the original game; however, the X button which scrolled through previous weapons is no longer included.

Too many weapons – The number of weapons Guns, Gore and Cannoli 2 has to offer alongside how confusing it is to cycle through them goes hand-in-hand. There are a total of 13 weapons Vincent can get his hands on. Of course, some are more effective than others. It leaves the player wondering why the game really needed three different pistols or rifles. Taking into consideration the first game, which only had nine total weapons available, sure there were still multiple of the same type of weapon, but they were also a lot easier to navigate between. Some of the new additions are familiar weapons seen during World War II, but it was probably best for some of these weapons to just replace other weapons instead of being stacked on to the arsenal. Surprisingly, the grenades and Molotov cocktails of the original game are missing in the sequel altogether. 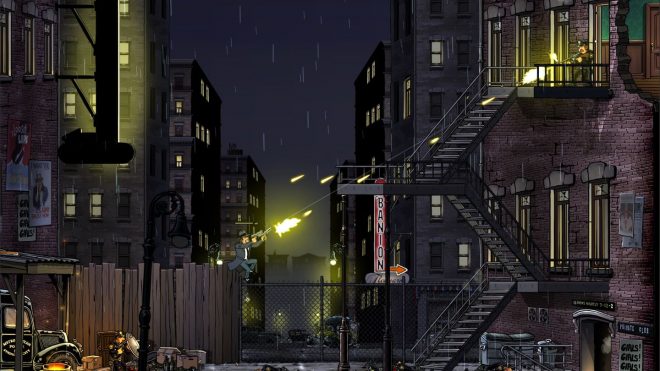 Guns, Gore and Cannoli 2 was developed and published by Crazy Monkey Studios. The game released on October 12th, 2018 for $12.99. A copy was provided for review purposes. 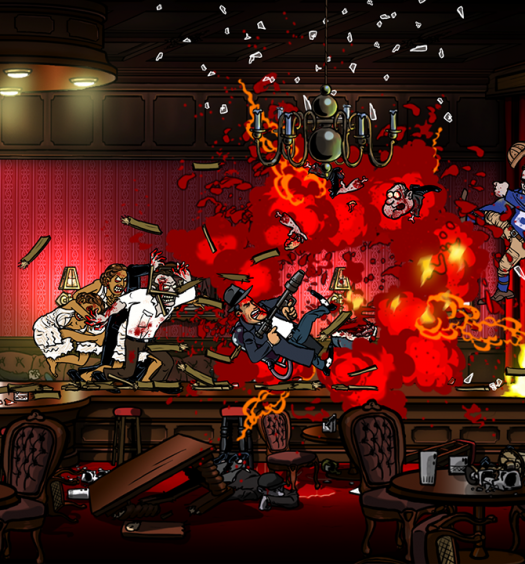 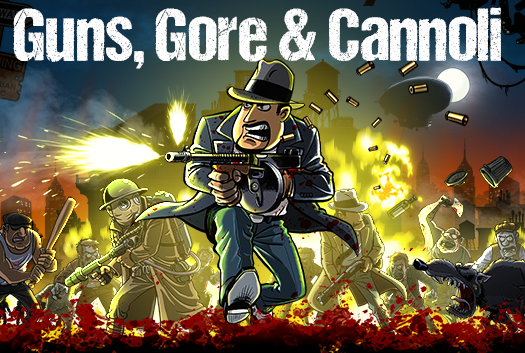 Guns, Gore and Cannoli out September 25