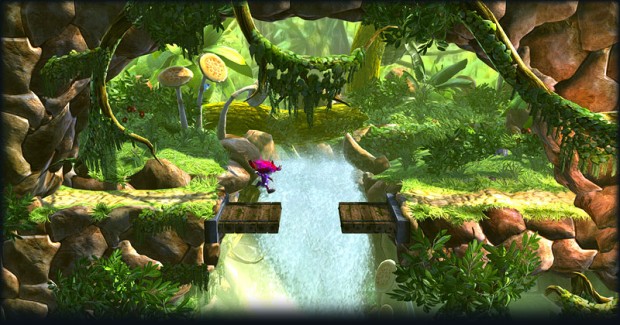 Giana Sisters: Twisted Dreams is the rare platformer in today’s world that is simultaneously incredibly demanding and very satisfying. The game, ported to XBLA from the first batch of Steam Greenlight games, was originally part of a successful Kickstarter project. The game’s protagonist, Giana, derives her name from the original Great Giana Sisters of the 1980s which was most well known for being successfully sued by Nintendo for its close similarities to Super Mario Bros. The new game maintains the charm of an older era while demonstrating a keen awareness of how graphics and sound have improved in 25 years between the original and Twisted Dreams.

The game’s main mechanic involves Giana’s ability to shift between two different forms, which shifts the entire world’s graphics and music accordingly. Players will find themselves shifting back and forth between worlds extremely rapidly at times — it recalls the shifting of Ikaruga and Outcast, though with substantial changes to the environment also, not just the main character. 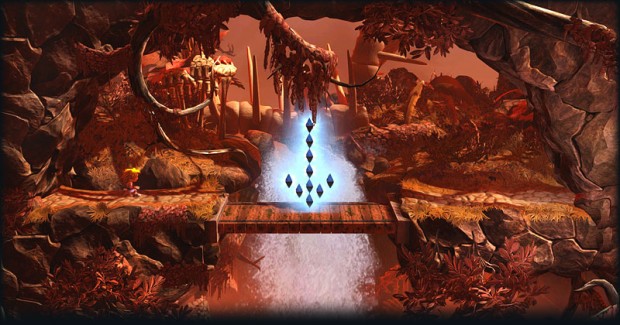 World twisting – When Giana switches forms, the entire world twists accordingly — look at the pictures in this review as an example. Open gates in the dreamworld twist into spiked deathtraps in the nightmare world, while rotting plants come to life as deadly poison ivy in the dream world. Platforms rotate in the opposite direction, walls gain substance in one world only to dissipate in the other, and all of the graphics that don’t involve mechanics shift to accommodate the new style. There’s no cooldown on switching — players will likely find themselves switching back and forth at times solely to observe the transformational visual effects on display.

Easy to understand, difficult to master – Giana has two abilities, one in each world. A float-enabled double jump as “cute” Giana in the nightmare world, and an eight-way flaming dash as “punk” Giana in the dream world. Each of the mechanics are very simple, but the game does a masterful job of requiring multiple actions in sequence. The game encourages exploration, as there is no time limit in the main game (though a time attack mode is unlockable).

Rocking soundtrack – Giana’s dual personalities come through strongest in the dynamic soundtrack, which shifts timbres and dynamics on the fly to match the visual transformation between the nightmare and the dream worlds. The dream world (with players controlling the “punk” Giana with the dash) is a land of electric guitars, while the nightmare world is more subdued, often with synthesizers or steel drums taking over the lead. Both soundtracks are great, but the ability to shift between them at will is very satisfying. 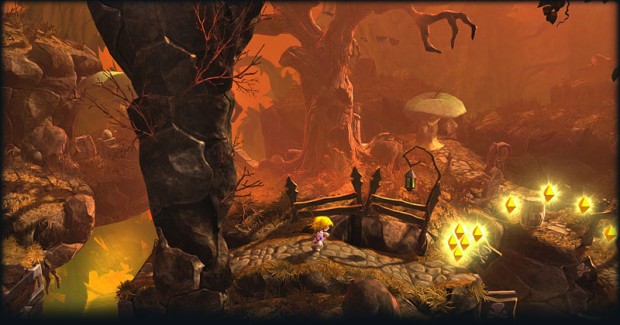 Difficulty curve ramping – Any player old enough to have played the platformers of the 1980’s will feel right at home with the game’s difficulty level, which ramps up very quickly. Unfortunately, even with an abundant number of checkpoints (which are disabled in the game’s two bonus “hardcore” modes), many gamers will be unable to finish the first world, let alone the entire game.

Clarity of vision – The game’s collectable crystals come in three colors: red, yellow, and blue. Blue crystals are collectable in both dream worlds, while red and yellow require a shift to the appropriate world. Unfortunately, some of the walls and barriers which only obstruct passage in either the dream world or the nightmare world (but not both) are not as easily identifiable. It is very likely that players will accidentally run into a wall or fall through a platform because they are in the wrong world, failing to notice the required shift.

Glitch in the worldspace – During the review of the game, there were two occasions where Giana got stuck inside of a wall and could not get out, forcing a restart of the level. Both of these involved shifting worlds during an extended dash sequence, which the game’s secrets require of players. It is not completely game-breaking to be forced to restart once or twice during a playthrough, but it is a sign that perhaps one more playtesting pass might have been helpful. 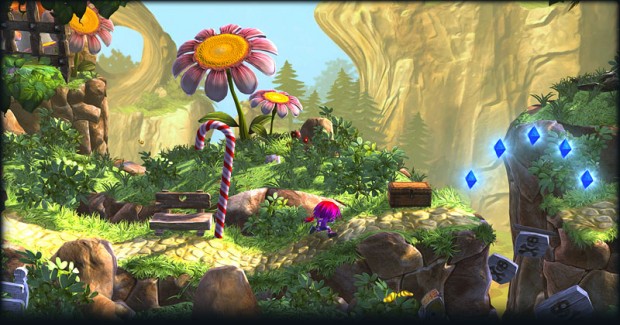 Overall, Giana Sisters: Twisted Dreams does a good job of recalling the rush of yesteryear’s platformers. It creates that sense of satisfaction that only comes from success in a very difficult video game. Because of that, however, the game’s difficulty may be alienating for some players. Not always being able to immediately sense which world each element requires at a particular time is problematic, though as often as players are likely to be shifting, this isn’t a dealbreaker, just a slight annoyance. Players for which neither of these issues is a problem are in for an exhilarating if brief roller coaster ride of a game that successfully blends exploration with break-neck pacing.