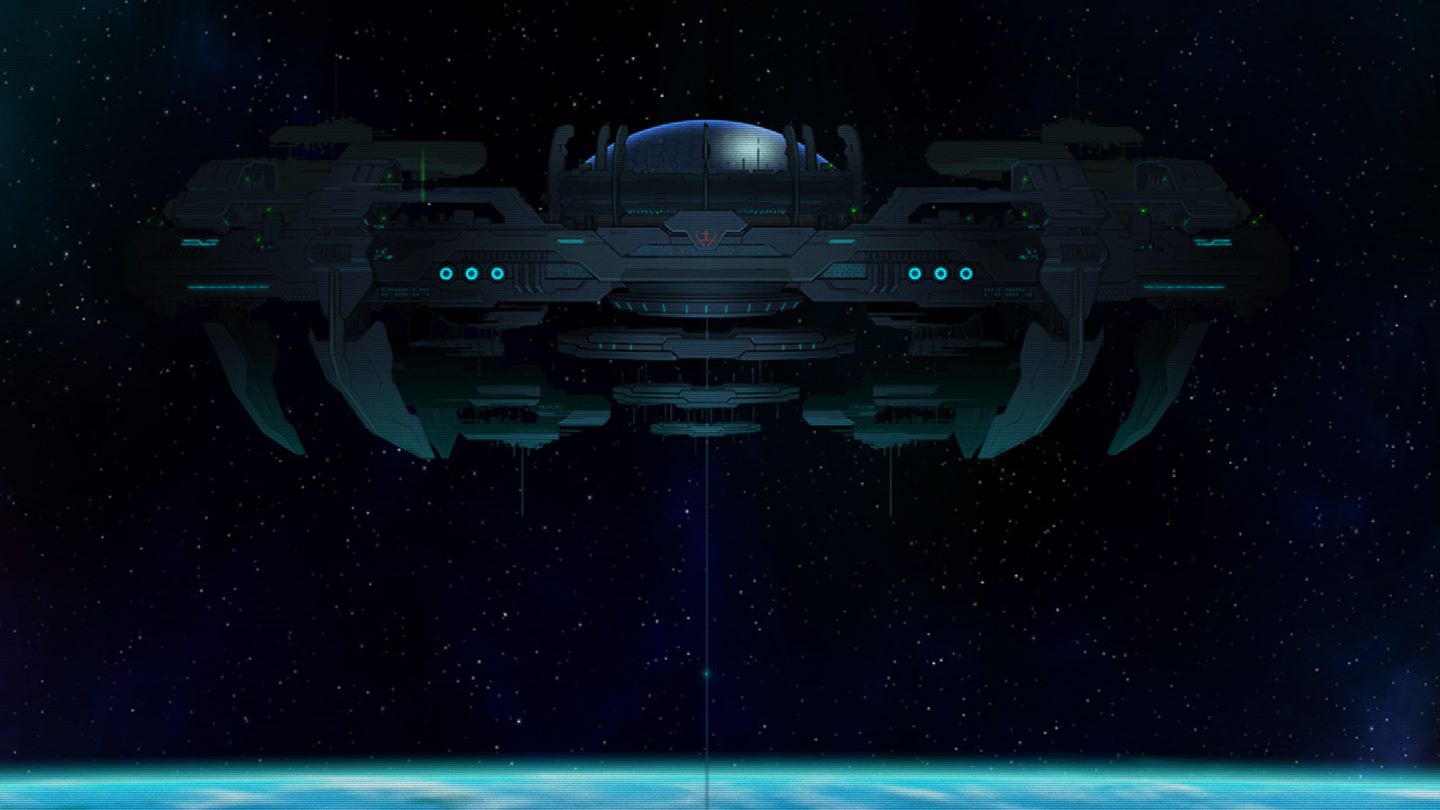 Do you ever consider the idea of experiencing a situation outside your body? Sometimes the direct conversations we have with friends or family make us wish that we could see the conversation from someone else’s point of view. From Francisco Téllez de Meneses, the developer that brought us Unepic, comes a new game that takes that entire premise and runs with it. A Metroidvania game that takes place sometime in the future. A time when service robots are in every home, and the giant corporation operating them runs manufacturing operations outside the Earth’s atmosphere, in a huge space station. Welcome to Ghost 1.0.

You control Ghost, an agent hired by two hackers named Jacker and Boogan to infiltrate the Nakamura space station to steal the formula for the Naka robotics program. Ghost will quickly come to learn that this is no easy task due to the station’s infinite amount of defenses ready to impede her progress. The situation becomes worse for the two hackers as the story unfolds and they learn more about Ghost. Explore the Nakamura, eliminate anything that stands in your way, and use a variety of different weapons and upgrades to assist you in completing your mission.

Seamless gameplay – One of the strongest aspects of ghost 1.0 comes from how fluent the gameplay works. For a large portion of the game, you’ll need to switch between your robotic body and other robotic forms continuously. This can be achieved at the press of the X button. Ghost will leave her shell, allowing you to fly over to an enemy and hit the X button again to take control of them. After you’re done controlling that enemy, you can simply leave their body by pressing the X button one last time, and by hitting the right bumper, you’ll instantly be transported back to ghosts shell. This entire concept will need to be used for a large portion of the game. Many obstacles will annihilate you if you try to complete them without controlling another form. Ghost puts this into perspective during the story by stating that it’s better to put something else in harm’s way other than herself.

Large Skill Tree – The skill tree in the game is massive, and the way it is laid out is interesting. There are skill trees for ghost’s shell, Boogan, Jacker and ghost in her ghost form. There is also a 5th set of skills for the Nakamura. Most of the skills offered to ghost’s shell pertain to increases in health, resistance to certain elements, etc. Boogan offers upgrades that will assist the player, such as more health, making certain abilities more effective and displaying enemies health. Jacker’s entire skill tree is all about hacking. As you play through the game, you’re required to complete alarm phases in certain areas. The skills provided by Jacker can prevent enemies from spawning in, spawning in allied bots, or simply bypassing the alarm immediately. These skills work by chance, so they don’t always come in handy. The ghost form skills are relative to controlling other robots, movement in ghost form, and aspects of death. Finally, the Nakamura upgrades are both useful and punishing. Certain upgrades, such as lowering the cost of items in shops and increasing the chance of receiving double upgrade cubes at the end of an alarm are helpful. Other skills, such as increasing all alarms by three levels or causing certain droppable items to disappear after three seconds can be punishing. There are a total of 60 skills available. The various skills are unlocked in tiers. So not all skills are available from the start of the game. 20 total skill points can be obtained through one play of the story, so you’ll need to choose your skills carefully, and try to play to your strengths and weaknesses. 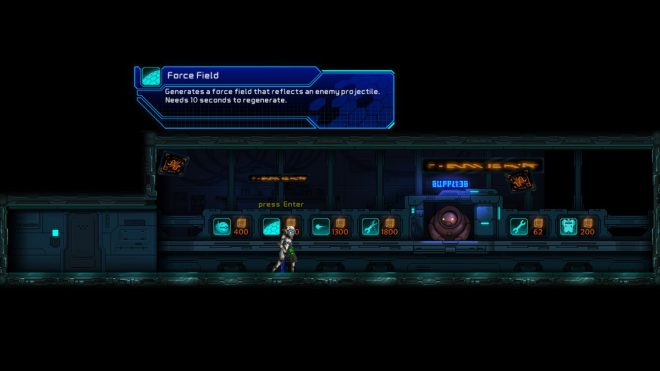 Powerups – Aside from the skills that can be obtained at various times during the game, we are also presented with powerups. Powerups work to strengthen certain weapons or abilities, and even give other special abilities to Ghost throughout the game. Powerups can be obtained in two ways, either by purchasing them in a shop or by collecting all the hidden souls in a certain area and picking up the powerup that could potentially drop. After a powerup is purchased or collected, players will be required to go back to the save room and save the game. Saving is essentially using a 3D printer to save a copy of yourself. If you die before saving the new powerups, you’ll not have them when you are reprinted. You will be required to go back to your body and pick them back up.

New Game Plus – Lets be honest, it’s bothersome when you put so much time and effort into upgrading a character and completing the game, only to find out the game doesn’t let you start the game again in your overpowered state. Thankfully, Ghost 1.0 lets you start the game again, keeping all of your weapons, skills, collected souls and power-ups intact. Obviously, the game takes away your keycards, which will need to be collected again. Revisiting shops will allow you to buy powerups again to add to the powerups you already have, essentially upgrading them further. The control rooms that hold the keycard fragments also have more skill points to collect, allowing you to further advance your character. It is wonderful!

Previously on Ghost 1.0 – Something that a lot of games could probably benefit from is an event recap from the last time you played. There may have come a time when you started playing a game again after several months of not playing. If you’re not the type of person who would want to start over, it can be rather confusing trying to figure out where you are in the game, what you were supposed to be doing and what led up to the point you’re at. Thankfully, Ghost 1.0 will always give players a recap of major events prior to them saving and quitting. This is helpful for any time you choose to come back and play, whether it be the next day or a month later. The game will give the narrative of what was happening as well as a scene that instructs what you’re currently doing. 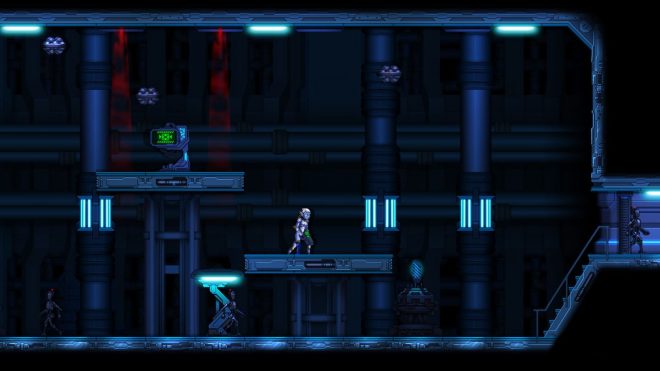 The Narrative – Ghost 1.0 goes above and beyond with the way it delivers its narrative. Players can expect an interesting backstory into the how Jacker and Boogan met, the events that led up to them hiring Ghost for the job, and details about Ghost’s employer. The game pieces together an interesting story that contains both serious and comedic dialogue that makes the game feel almost lifelike. As you continue through the game, the narrative has an interesting way to keep pulling you in and causing you to push forward to uncover the truth. The voice work of every character is pristine. The random dialogue you’re met with at times is interesting in the way it connects to reality.

Weapon Variety – There is a large selection of different weapons to choose from in Ghost 1.0. In many other games, with a weapon selection this large, a lot of the weapons feel similar to one another, or its just simply a challenge figuring out how they’re different. Ghost is able to equip one primary weapon and up to three other secondary weapons. That doesn’t particularly mean you can only carry three. You are capable of purchasing all secondary weapons from shops. They will be accessible in your inventory at any time and can be changed out on the fly. But you may only have three equipped at once. Some weapons work offensively, while others work defensively. There are weapons for long, medium and short ranges. It’s all about playing the game to your strengths and weaknesses. Additional primary weapons are acquired from defeating various bosses and collecting their souls. These weapons aren’t in wide-variety like the secondary weapons, but they each have pros and cons. Would you rather take a pistol that fires fast but doesn’t do much damage, or another weapon that fires slower and packs a bigger punch? Ammo is also unlimited on both primary and secondary weapons to an extent. You don’t need to collect ammo in the world, but as the ammo reserves on a weapon run dry, the ammo will regenerate over time. This is another aspect to take into consideration when choosing your weapons.

Geeks – Geeks are collectibles that are obtained throughout the space-station by collecting hidden souls in certain areas. There is a multitude of these items, but only one can be activated at a time. Each item has a different effect, and it’s up to the player to discover what in the game has changed with its activation. Many of these items are references to pop culture and other popular series. Bat is one of the few geeks you can find. When active, any time you transition between rooms, you’re met with the classic 70’s Batman tv show transition used from scene to scene. White Plastic is another interesting geek. When activated, many of the basic combat robots turn into stormtroopers from Star Wars. It’s probably best not to control one though, as you most likely won’t be able to hit anything with your shots. 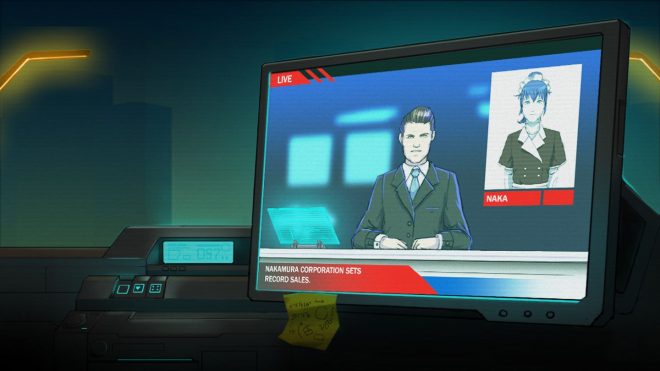 Punishable Death – As you progress through Ghost 1.0, you’ll learn that you need to collect yellow upgrade cubes from defeating enemies or destroying boxes around the world. These cubes will be your currency in shops for buying upgrades and weapons. From the start of the game, the collection of these cubes feels slow. The first time you die, you’ll realize that the cubes you’ve lost are gone forever. The further you progress through the game, you’ll eventually obtain powerups that allow you to spawn with upgrade cubes. These power-ups give you a kickstart at earning cubes again, though the amount gained from them is considerably low. There is also a skill that allows you to collect a certain amount of upgrade cubes back from your body after death. The skill is almost useless when you notice how little the number of cubes is returned. After dying with 10,000 cubes in-hand, returning to the point of death and collecting the dropped cubes allowed for an earn back of 200 cubes. That’s a mere 2% of what was in-hand. Some of the later areas of the game can be unrelenting with both enemies and obstacles. If you’re holding a large number of cubes and you end up dying, you’re going to feel it, especially if you die walking into an unexpected or unforeseen barrage. 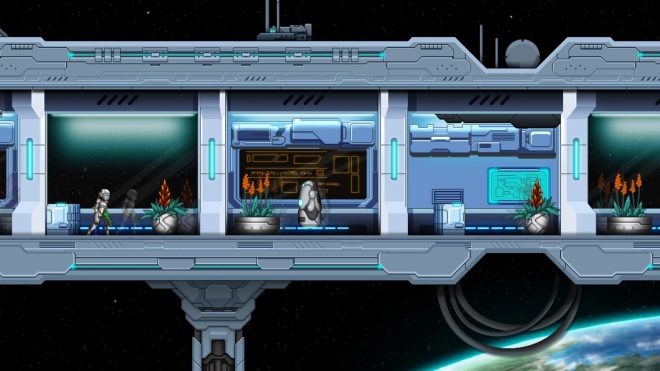 Despite the punishment of death, every other aspect of the game feels solid. It can be annoying to die to things beyond your control, but the best way to overcome any obstacle is to learn from it. Thankfully cubes can be farmed from the various alarm sections of the game, as well as retrieved from boxes laying almost everywhere, so there’s an abundance of ways to recollect what’s lost. Ghost 1.0 strives in its narrative,  even with a few scenes in which you may question the reality of the circumstances. The first playthrough of Ghost 1.0 took around 10 hours to complete playing on classic mode. Players can expect a longer playthrough for higher difficulties, especially if you plan to collect everything. The $9.99 asking price is a blessing. Do yourself a favor and play this game! You won’t regret it.

Ghost 1.0 was developed and produced by Francisco Téllez de Meneses. The game released on July 11th, 2018 for $9.99. A copy was provided for review purposes. 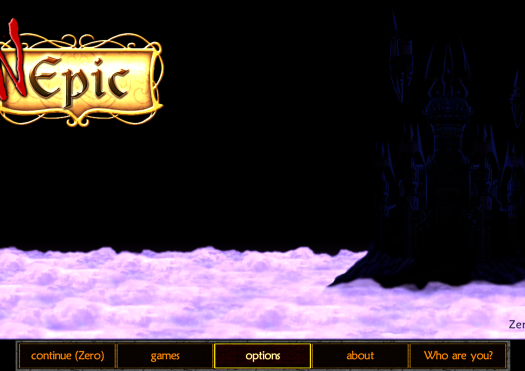 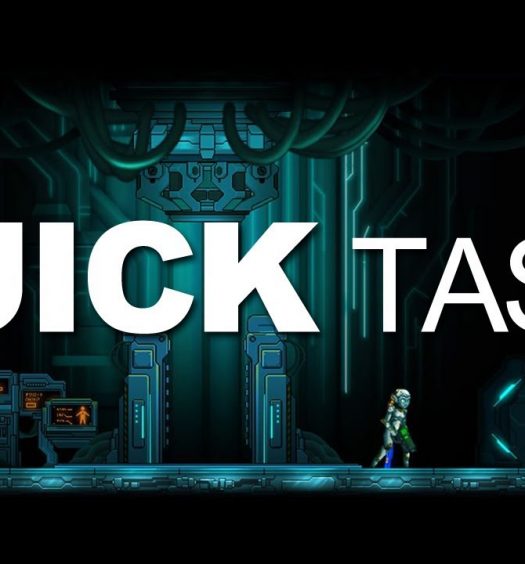