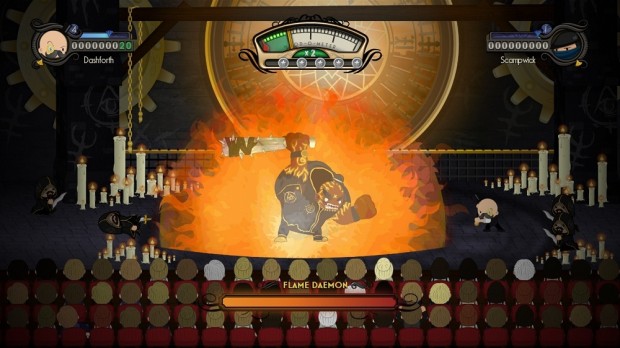 Baron Dashforth, the Victorian demon-hunter, might not be a household name, yet, but all that is about to change come September. Mediatonic along with Mastertronic and Devolver Digital announced this week that they will be releasing their new title Foul Play on XBLA and PC come September 18.

Foul Play is an “ENTIRELY ACCURATE” side-scrolling brawler which chronincles the life of Baron Dashforth. Set on a theater stage, Dashforth raises the curtain and acts out his life stories in a vaudevillian manner. Thrill the audience with stylistic moves parlayed into combos and watch Baron’s approval rating skyrocket. The emphasis here is placed on style as to succeed to the next act, the audience must be entertained.

Fear not though, as Baron does not go it alone. The game features online co-op where a gaming friend can take up the role of Dashforth’s protege, Scampwick. Special team take downs and linked attacks are the calling cards for these thespian pugilists.

While the stories told in Foul Play might not be Broadway worthy, the following trailer certainly does show that this “ONE NIGHT ONLY” performance is worthy of being nominated for  the “Drama, Suspense, Thrill and above all, Style” of the year award.