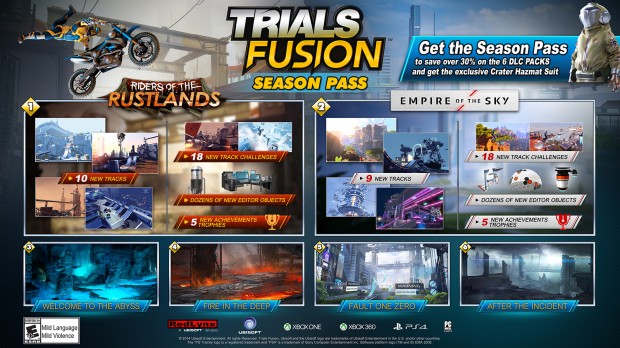 On July 29th the first Trials Fusion DLC, Riders of the Rustlands, will be released for the $4.99 or will be free for those with the season pass, which costs $20. There will be six DLC packs by May 2015 so if you plan on playing Trials Fusion for some time in the future then the season pass is the way to go. Riders of the Rustlands will add five new achievements, 10 new tracks, 18 new track challenges, and dozens of new editor objects. A more complete list of what is featured can be seen below. The second DLC pack, Empire of the Sky, was also briefly mentioned but all that is known is that it will release sometime this summer.

There was also an interview done with RedLynx co-founder, Antti Ilvessuo, that revealed some new insight into both the DLC and the future of Trial Fusion. The future sounds quite promising for fans especially the way Antti Ilvessuo described it, “There are many other free features after those too – things we haven’t talked about but are on the roadmap. We are dedicated to the model of continuously expanding and improving the game with new features that will make the game even greater. This is the long-term plan.” There were also hints about future DLC packs, “Yes, we are planning to take the world of Trials Fusion to places that no Trials game has gone before – into the clouds, under the sea and even deep underground.”