In the future, there is only one Sun remaining. While most everyone has come to an agreement to share this resource of heat and life, one alien race in the universe has decided to get greedy and take control of the space around it. It’s up to you to stop this force by any means necessary. You’ll be flying various missions to weaken the enemy threat.

Final Star a side-scrolling shooter that allows you to choose what you upgrade first. You can replay certain missions several times, but the difficulty increases as you succeed. The game is meant to be played completely through more than once, allowing you to carry over your upgrades into the next playthrough. Couch co-op is available if you have a friend and a second controller.

Shooting with satellites — A nice addition to firing your weapon is the control of satellites around your ship. You’re able to focus fire, drawing the satellites closer. This makes your ship slower but does a ton of damage. This sounds simple but somehow manages to make the flow of battle quite different from anything else. You fly around fast, shooting a wide spread to kill off smaller ships, then move your satellites with the analog stick to focus on the larger spacecraft, destroying them before they can fire back. It adds a lot more strategy than simply holding down the trigger. You must make quick decisions on when to focus this fire or to avoid a rain of bullets coming in your direction. Then, pick the right time to engage. This is even more crucial when facing bosses, which can be the end of you if you’re not doing it correctly. If this mechanic wasn’t implemented, it would be a very different game and I would have shrugged it off as just another shooter. 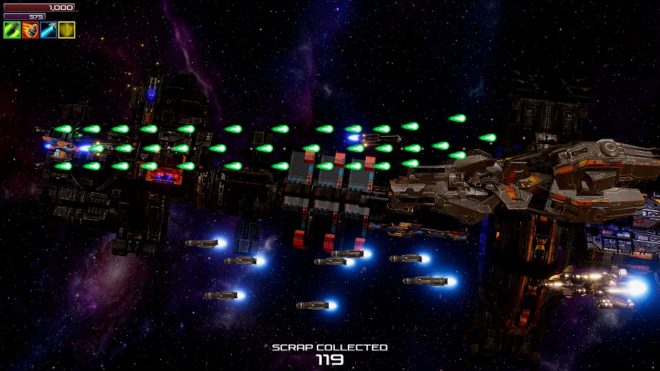 Shoot, die, repeat — Several missions are present, showing you the difficulty in a ranking system of stars (five being the most difficult). Certain missions will allow you to replay them with increased difficulty. You can keep playing them until you’re beyond your depth and essentially stand no chance of success. This allows you to gain scrap and gold to beat other missions that are more difficult to you. Don’t want to bother with escort missions? Me either, so you can skip them and replay missions you do enjoy. I liked having some freedom in what I chose to do, as well as multiple opportunities to get the last few resources I needed to upgrade. After you finish the last mission, you get to do it all over again but keep your upgrades. The missions are supposed to be harder because of the damage that was done to your ship. You can basically just keep playing and upgrading at your leisure. It’s not a very long game, so it’s not a hassle to do and it didn’t get boring. My fastest playthrough was my third attempt because I was powerful enough to just play the main missions needed to get to the end.

Permanent Upgrades — You keep what you put your gold and scrap into, even through new playthroughs. The system is simple, but the choices aren’t. You won’t have an unlimited supply of resources because there will be a point where you can’t beat levels, or do poorly on some and don’t get much out of them. This may seem brutal but it works fine. It keeps the level of difficulty high but fair if you invest properly. I was having a hard time destroying three elite fighters, which are bosses you will be facing. By my second playthrough, I beat them in seconds. Use your shield, fire the onslaught of missiles, and finish them off with a few bullets. I barely had to move. This gives a sense of improvement, that your upgrades are actually meaningful. Besides abilities and health, you can upgrade your ships. You get three ships with small variations in stats. They are different colors and shoot different bullets. Each level you complete will usually give you an upgrade to the stats of the ships, but only certain ones – and the improved stats are randomized. You can reroll these awards a few times to keep upgrading the ship you want to play. The stats improved include speed, the rate of fire, and so on. It’s a good idea to know this from the start instead of playing through without a thought. If you end up with a bad set, you can just die on purpose and get to roll your awards again. 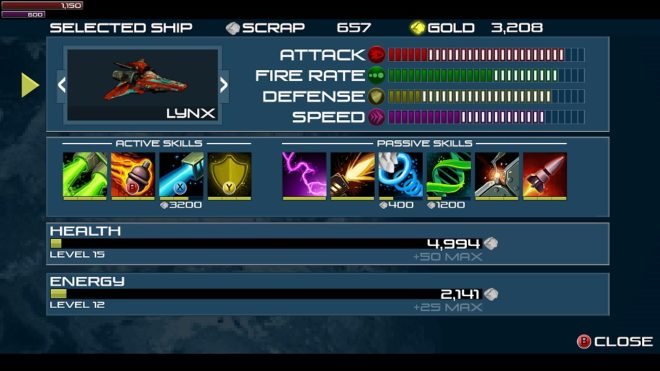 Mini-games — Besides the normal missions, you will be able to play a mini-game in which you match different colored shapes. The more you get next to each other, the more points you gain. There are several levels that reward you with upgrades and scrap. It gives an extra way to power your ship up without having to complete normal missions. In another mission, there is a bonus round where you collect scrap and gold from a robot that sings. This then unlocks a series of arcade missions that are retro looking and you can only shoot. They aren’t as fun as the normal missions but do add to resource farming and it offers a respite from all the normal action. 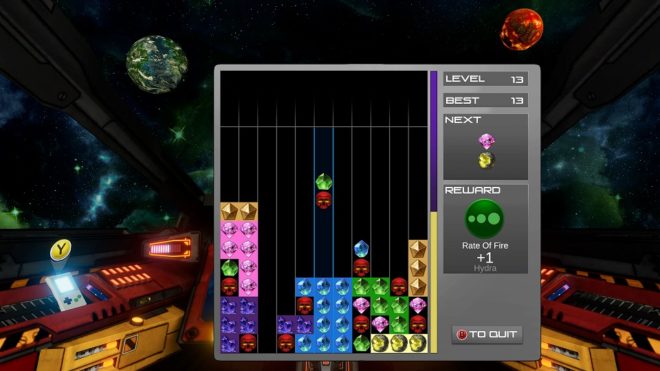 Hard to hit enemies — While being able to destroy most enemies, there are several sections of annoying ones that are extremely difficult to hit. They fly up and down and come at you quickly, in high numbers. Even being well upgraded, it’s more appropriate to just move away from them. Killing them is a task that will just make you lose health. They seem a bit too strong to deal with, making the fast pace of destruction slow down a bit. The worst enemy in the game is turrets. Luckily they aren’t on very many levels, but in the last mission there are several and they can be frustrating. They are positioned near the bottom of the screen and are difficult to hit without damaging your ship on the ground. While dealing with these pests, other ships flying above will start appearing creating even more danger. Luckily we upgraded our bombs, right? Nope, they don’t help at all. One would imagine those bombs are designed specifically for ground level units. If the turrets were taller, or you didn’t take damage from going too far down on the screen, this wouldn’t be an issue. You’ll have to waste your shielding to avoid collision damage, which I really hate doing on what should be a simple adversary. In the final mission there is also a ship that seems to be glitched and shows as being destroyed but stays alive and really throws you off. I don’t think it’s intentional, because it’s the only ship that does it and looks like all the others.

Some poor alternate weapons — Besides just shooting your normal guns, you are able to block enemy bullets with some lasers. You are limited on power to use this defense mechanism, so it is smarter to invest your scrap into gaining more health (as well as health recovery). While at times it is useful to block unavoidable fire from enemy spacecraft, you won’t be needing it all the time. You’ll learn where enemies spawn and how to avoid most of the attacks. Power drains much too quickly to be useful and doesn’t actually block all incoming threats. There are bombs you can drop as well, but they aren’t as powerful as other games that have a similar weapon. They fall at a curve to the ground and don’t do very much damage. There are no huge explosions or anything fancy, just small bursts or medium damage. I would unleash a fully upgraded bomb (drops four of them), and either miss or not do enough damage. It would have been easier just to lower my ship and shoot them straight on. The most powerful attack would be the missiles that shoot out all at once. You cannot move while this happens, making it used only for very big ships or enemy bosses. I didn’t even want to upgrade it all the way, because the initial amount fired does enough damage to beat bosses in seconds and I didn’t want to be immobilized for longer than necessary when attacking normal spacecraft. I only really thought that half of what you can upgrade was worth it, and I figure these other additional weapons could use a lot of improvement. 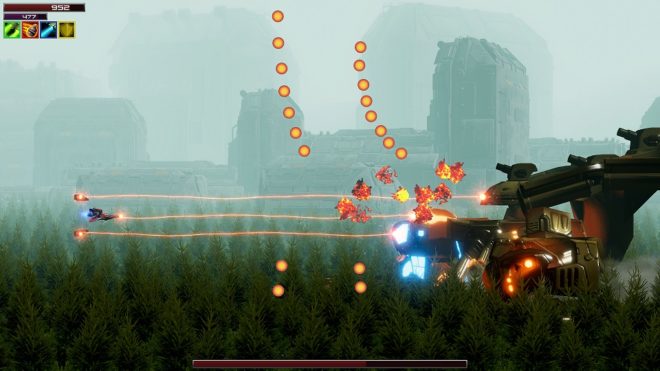 While seeming like just another shmup, Final Star excels in being entertaining while still being a challenge. It’s not overly difficult and you can enjoy multiple playthroughs. It’s pretty short, but you can replay missions as well as the entire game while maintaining your precious upgrades. There are a few negatives in certain enemies and useless feeling powers, but the positives outweigh them. Choosing what upgrades and what ship you play as is a delight. Mini-games provide a nice break when some missions are tough. The graphics look fine and the story is easy to follow and satisfactory. If this game ever gets a sequel, I will be looking forward to it.

Final Star was published by Enjoy These Pixels and developed by Dynamic Voltage Games on Xbox One. It was released on December 20, 2018, for $14.99. A copy was provided by the publisher for review purposes. 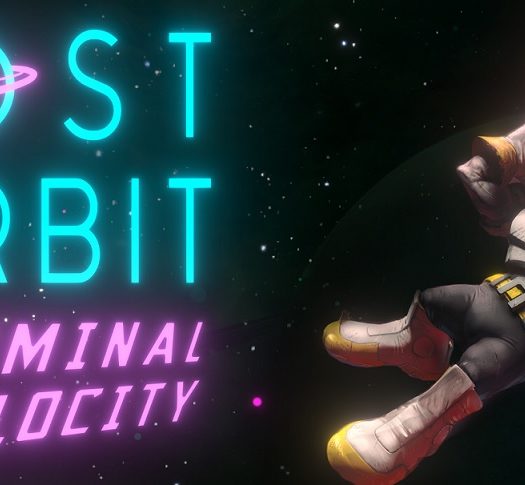 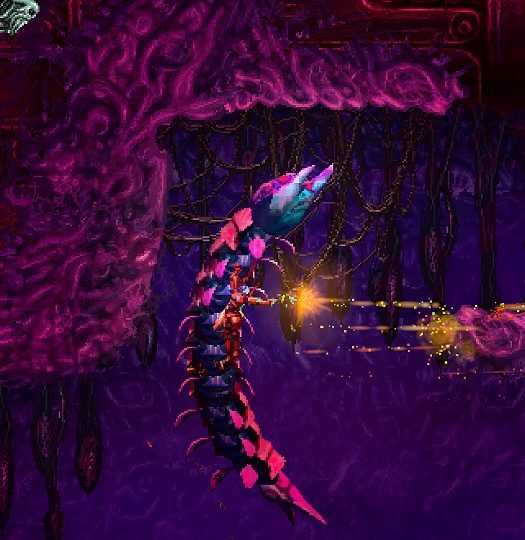