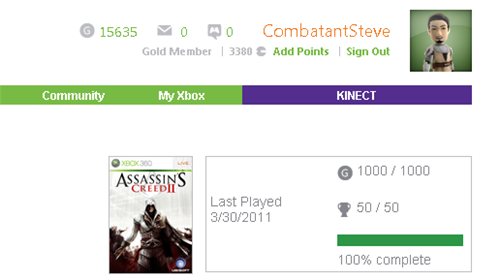 What you see above is an anomaly in my gamerscore — a game with every achievement unlocked. In fact that date you see, March 30, 2011, was the first time in two and the half years I’ve owned my 360 that I’ve ever achieved 100% completion on any game. I’m not a completionist, in fact, I’m probably the furthest thing from it. I’m what you might call a casualist. I play a game until I get bored with it. Lots of times I’ll beat the game and not go back for extra achievements; I don’t get the point.

I’ve talked with other XBLAFans staff on this issue before and I get, at least on some superficial level, why they take the completionist route.  Some take it as the true measure of finishing the game. While a casualist might play until the story is complete the completionist mentality says more of “do everything there is to do” — at least that’s how I’m getting it. And I get that for the most part, I just can’t drive myself to do some of the more dastardly achievements developers put in. And I don’t get how some folks can be so much of a completionist as to get 100% on a game that didn’t deserve their time.

I used to think it was for bragging rights. I thought people did it to show off their incredibly high gamerscore. I really don’t get that mentality. Maybe it’s because I’m now past 30, have a wife and daughter, and work in a professional setting, but to me that just says you play too many video games. Dang kids, with your rock’n roll and your skateboards and your texting and your crazy hair! Get a job!

Now on a more serious note: I’m not knocking completionists in any way. I just don’t understand the idea of continuing to play once the game has turned to the grind. Open world games are particularly evil about this. When I got 1000/1000 on Assassin’s Creed II what killed me was getting the 100 feathers achievement. That’s just downright evil. If I didn’t already have 900+ gamerscore just by doing the fun things in the game I wouldn’t have bothered to do something so monotonous and time consuming. While running all parkour-style through the streets and rooftops is always a blast I just don’t get the fun in collecting this stuff. I mean 100 collectables? That would have taken me years to find them all had I not used a cheat sheet (which I did). That is what I don’t understand about completionism. That’s what I’d like to hear from you about.

What drives a casualist?

I can only speak for myself, but when I play a game I play it until it isn’t fun anymore. Sometimes I get one achievement and I never touch the game again, though admittedly those are usually borrowed games. Usually I get 1/3 to 1/2 of them before I give up. I don’t feel any need to complete an achievement unless it sounds fun or coincides with something I want to do anyway, like unlocking a character. Occasionally I’ll go out of my way to earn one if I want a challenge. But as in the case of the “If they came to hear me beg” achievement in Halo: Reach I sometimes give up after hours of trying. I must have watched 10 different YouTube tutorials, talked to tons of people and tried it close to 100 times. Everyone says it’s easy, but I have yet to get it. That’s not fun to me.

So where do you fall? Are you a completionist, a casualist, or somewhere in between? Tell us where you stand and why. Maybe I’ll come to understand what drives completionists, maybe I’ll find I’m not the only casualist, or maybe I’ll just have a few game codes to give away for those who tweet any of the following with a description as to who they are as a gamer: Xbox Live Arcade pricing: Does it need an overhaul?