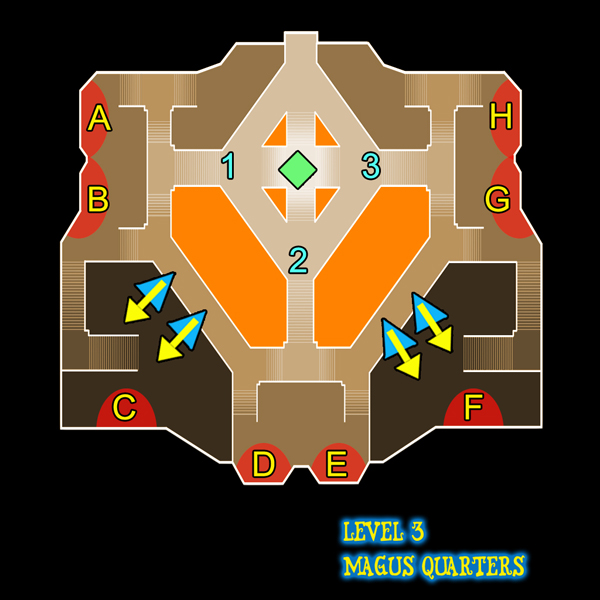 The first two waves will be business as usual, focus on the larger Orc enemies and make sure you have the three choke points covered with ample traps by the time you start building for wave 4. In wave 4 you will experience flying Wyvern enemies for the first time. Make sure you have a few ranged weapons in the gaps in between the major choke points and have those weapons pointed at doors C and F. Two ranged towers that are leveled-up once in each gap should be enough to handle any flying Wyvern enemy that this level can throw at you. Kobold enemies with dynamite on their backs will also be a part of wave 4. So keep an eye out for then and make them a top priority as usual.

Wave 5 will include a larger amount of flying Wyvern enemies and Kobolds. Make sure you have your ranged towers leveled-up and you can ignore all flying enemies and let the towers do all the work. That will allow you to free roam and look for the Kobolds and try to kill an Orc or two every so often to lighten the load that your traps and towers have to carry.

Wave 6 will be a lot of the usual. Be sure to keep an eye for the Kobolds. A little after the half-way point of the wave, an Ogre will emerge from door D. This time he will have over 10,000 health. Make him your top priority and use the same tactics they you used on the Ogre in the previous level depending on what character you are using. Your towers should be able to handle the other enemies while you fight the Ogre and if you have time left after you kill the Ogre, go back to the same tactics. Kobolds are top priority, then the Orcs and then everything else.