Generic Damage Resistance is basically how much damage you resist when you are hit, the higher this is the less health you lose. This will max out at 90%(other resistances do to) and should be the main focus of your armor set.

Once a stat reaches 70 it starts to receive diminishing returns. What that basically means is that the difference between 1 and 70 will be much larger than what the difference between 70 – 140 in a stat would be. That is not to say it won’t make much of a difference, it just means that if you like you can focus all your hero skill points on your hero stats and have your armor focused on your tower stats to achieve a more balanced character. It should be noted that Hero Run Speed actually maxes out at 50 and will not upgrade past that in terms of results.

Getting a set bonus is massive advantage, if you thought your armor was awesome before wait until you see it in a set. This should be what you strive to find when looking for armor, great base stats but also apart of a set.

If your characters are still quite low or you only have a single high level then you should consider running through Ramparts on Hard or Insane, this isn’t the best experience you can get but its very easy to defend for a third act level. The higher the difficulty the better experience. Remember even if you can’t finish the level you still get great experience for completing single waves, not to mention good loot.

To be able to get the best experience and loot you are going to need a level 60+ Squire, remember you can play by yourself and swap characters between waves to level your other characters up. Glitterhelm Cavern on insane is by fair the best experience in the game, and using a fairly simple set up you can reach the third wave with minimal effort. Basically you will need to set up a Slice N Dice Blockade at each path that the enemies follow to the crystals and have the crystals that are attacked by Wyverns protected by Harpoon Turrets. You should have just enough mana in the first wave to set up everything before it starts. It will take some practice to get the placement right but it is very much so worth it. Here is a picture of the basic lay out, just remember the second wave does have an Ogre. 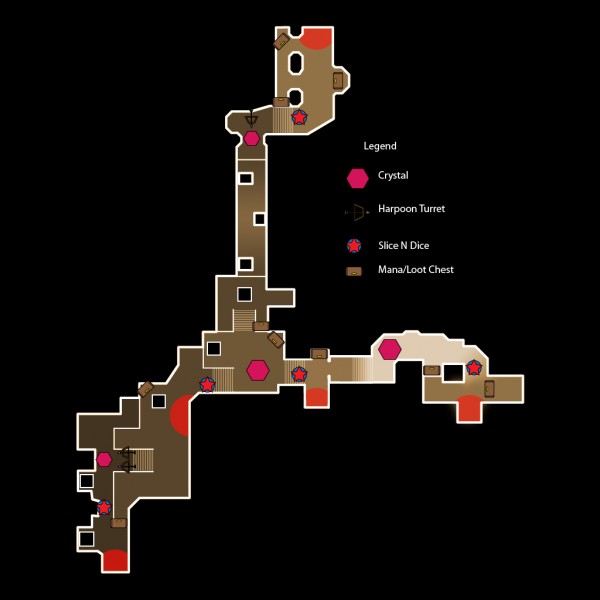 If you want to make some quick money find a weapon that has high upgrade slots(25+) and some where between 600 – 1000 projectile speed, invest into it and solely upgrade projectile speed as crazy as it seems there will be a point where you will start making money by investing into it, this is a great way to make a few million to get you started.

That money making method pales in comparison to elemental damage. Although Projectile Speed has no cap on how much it multiplies per upgrade, it is worth less than what elemental damage is. Elemental damage will cap at 400 per upgrade but it is worth MUCH more. The best weapon to make money from is Malificers Rapier. You can literally make between five and seven million per sword you invest in if under the perfect conditions. The sword can be found by beating Alchemical Laboratories on Insane as a Squire. A sword worth investing usually has between 220 – 300 poison base damage and at the very least 23 upgrade slots. Of course if you wish to feel more like you are earning your money through loot, Glitterhelm Caverns on Insane can’t be beat.

If you want to beat many of the challenges in and campaign levels on insane you are going to most likely need multiple level 70 characters due to a few reasons. One of course is that you can’t always get a group of four people or the characters you need. But the real reason why is because the more people there are the more enemies are spawned, so at times its imperative you have the Auras from a Monk yet still have only three people during the wave as Huntresses to deal with enemies quickly.

Character swapping will soon become second nature to you but it is something you start doing early on as it is an important part of some insane strategies, many times in our challenge guide we assume that you have multiple level 70 characters simple because its nearly impossible without them.

Get used to repairing other peoples emplacements as insane requires very involved teamwork, all for one and one for all.