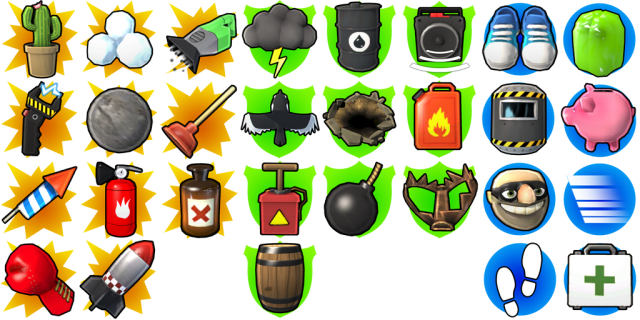 The following article was written by Andreas Hackel, art director at Candygun.

Today we at Candygun Games would like to present the process of creating weapons in our upcoming game, Dollar Dash. We have been pouring in countless hours as we finish development, so it has been a thrilling experience tinkering with the in-game weapons to pave way for a competitive, yet entertaining for all ages, multiplayer game.

Dollar Dash offers a wide range of fun weapons to slow down opponents and steal their money. There are three different categories of weapons and there is a slot for one each per category. Permitting only one action weapon per category has players weighing their options on what is most useful in each scenario – should they use the long-range snowball in effort to free up a slot for the medium range boxing glove, or should they hold onto the snowball to attack from afar? Choices are tough, but the competitive factor always looms. This may be a bit different to what many are used to from other games, but we found out that this system is the most fun for a fast-paced arcade game. The three different categories have their advantages in combat and defense:

Offensive weapons can be fired or thrown at an opponent in front of the player. Some of them are short-ranged while others encompass the entire level. Most offensive weapons have multiple charges, so testing the effects of each is essential to for the best strategy.

Defensive Weapons can be dropped to the floor to attack opponents in pursuit. Most of them are traps that trigger when someone runs across them. Defensive weapons are superb when playing Save the Safe mode – players can be on the run from the opposition and lie down oil slicks to have players slide off the level or a portable to have opponents falling to their doom.

Power-ups give you special powers for a limited time. Think of them as aides to give players a temporary boost to have a leg up on their opponents. Picking up the sneakers give the player a jolt of speed to run to the nearest bag of money before anyone else approaches it. Another example is the jelly protective shell that reflects projectiles back at the attacker. 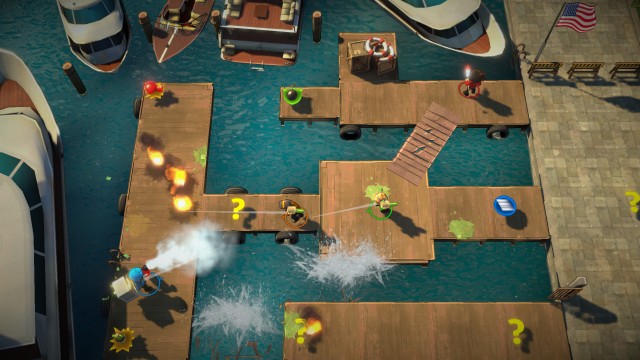 Here is a list of the offensive and defensive weapons and the power ups: 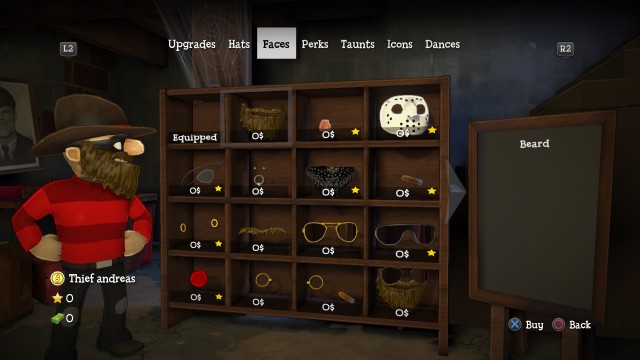 Sneakers – Temporary speed boost.
Cloak of Invisibility – Temporary invisibility.
First Aid Kit – Instant healing. Can be used while knocked out.
Shield – Protects against frontal damage. Follows your aim.
Piggy Bank – Instantly saves the $$$ in your bag.
Boost – Dash forward instantly. Dash over traps to disarm them.
Jelly – Reflects all projectiles back at the attacker for a short while.
Doppelganger – A double confuses your opponents

Before each match, players can specify what weapons are allowed – so it is possible to play with atomic bombs only or even without any weapons at all! If there are no specifications on the custom weapon set, then we have chosen a default set for each level that fits best in our eyes. In addition, players have the ability to spend the money they have collected from each match to buy weapon upgrades in the shop to provide even more advantages in-game. 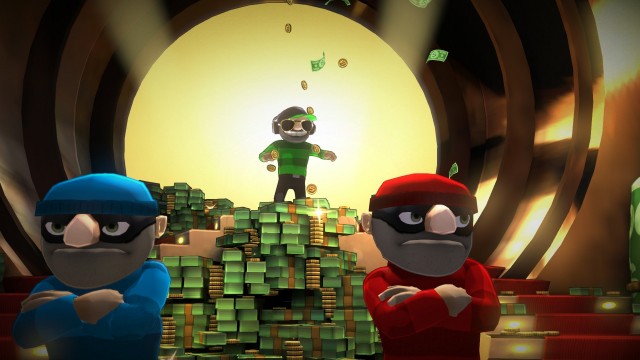