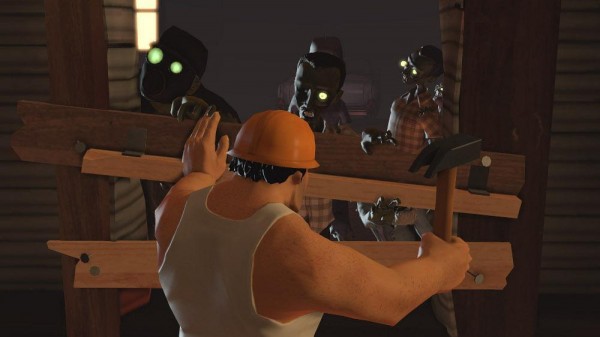 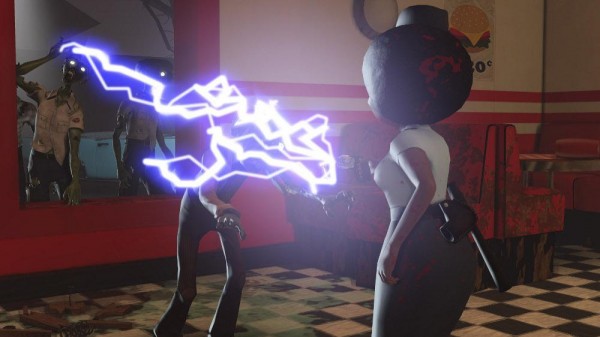 Thematic success – As crazy as the theme of Dead Block is, there is no denying that it works. The old school rock music is pervasive throughout. The opening sequences of each level really give the feel of an old B horror movie. But at the same time the graphics and characters are all made in a lighthearted and humorous way. It isn’t as serious as games like Left 4 Dead. It succeeds at being quirky and completely unique in a very good way.

Lots of tension – Very few games we have played have succeeded in being both humorous and tense. Resident Evil can certainly ratchet up the tension, but it’s far from light hearted. While playing Dead Block you’ll never actually be scared; rather the tension comes from having to constantly defend your building from the oncoming horde of zombies. There is a real sense of urgency as you search for a missing key and knowing that your barricades won’t last much longer. The tension level can get rather high because you are forced to stay put in certain areas and search. It adds a lot of thrill to the otherwise dull process of searching.

Definitely something new – We were impressed with Candygun Games for really trying something new here. Both the theme and gameplay are completely unique. That isn’t to say that it is perfect or that it will be for everyone. Rather it’s refreshing to see something like this when so many run of the mill games are released. It deserves some attention.

Traps galore – Each building you are in has tons of windows and doors that zombies will gladly come pouring through. You have two options: board them up or set a trap. Boarding up a door is just a stop gap solution. The zombies will just pull it down but it gives you some time. The much more entertaining option is to set traps. There are freeze traps, box traps, and bomb traps just to name a few. They are designed to destroy, slow down, or confuse the zombies. It becomes a necessary thing too as some levels require you to defeat a set amount of enemies. There’s a certain satisfaction from setting a rolling pin trap and them clubbing a zombie out of existence.

Tons of strategy options – Dead Block seems to be custom made for creative strategists. If you want to focus on traps than that’s fine. If you feel like barricades are a better option you can do that too. If playing it safe is too boring than feel free to lure a huge mass of zombies to you and then pop a quarter into a jukebox (apparently music both raises zombies from the dead and kills them … don’t ask questions). The point is that there is any number of ways to play and the more resourceful you are the better you do. In one particular level we had barricaded ourselves into a corner only to discover that we could still use our special attack on the zombies on the other side. This game is about finding a way to stay alive, and the zombies just keep coming. 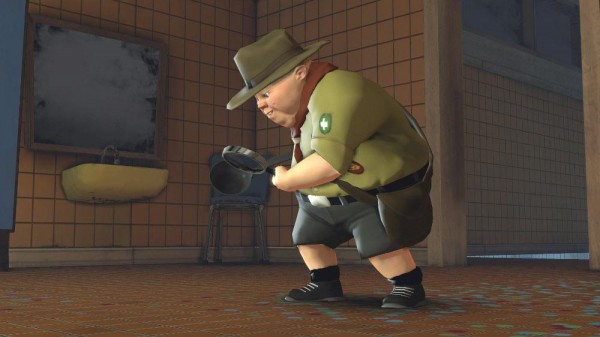 Repetitive gameplay – Despite doing so much so well, Dead Block’s core gameplay is extremely repetitive. In each stage there are several items that you have to find. To find them you need to smash and search trough everything. You essentially have to destroy and search everything in every room to ensure that you find what you need. Destroying things is simply mashing buttons and searching isn’t much better. You do this for the majority of the game, only taking a break to repair or set new traps. It works in that sense, but it gets old smashing buttons all day. This is especially evident when you lose and have to start the whole level over from scratch.

Character switching underutilized – Each character has different skills. The construction worker is great at breaking things down and making barricades. The scout is super fast at searching items. The police woman has the best melee attack. There are levels where all three are at your disposal. Unfortunately it always seems best to stick with one character and let the computer control the others rather than switching around a lot. This game was definitely designed to be played with friends who are each utilizing the unique skills of each character.

No online multiplayer – This is a pretty glaring omission considering it seems to be designed as a multiplayer game. Considering the cooperative nature of the game online play over Xbox Live should have been a requirement prior to release. The lack of it seriously shortens the replay value and lowers potential sales. 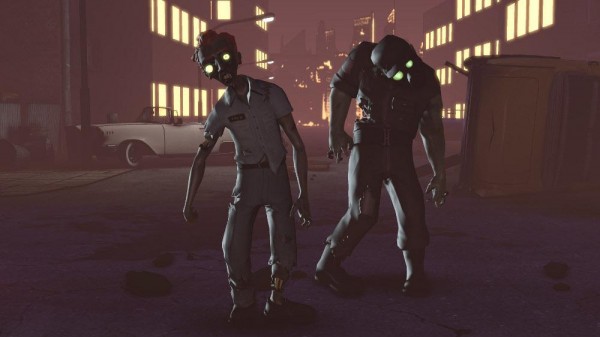 Dead Block is important to XBLA because it does so many things that are new and different. It isn’t a technical masterpiece. Many times it feels more like an experimental game than anything else. It might be best described with a quick analogy: high fashion clothes that models wear on runways are often praised for their originality but are ultimately impractical. Dead Block feels like a high fashion statement for video games, but will seem impractical to some. Fortunately the demo gets across the theme and feel of the game surprisingly well. In our opinion Dead Block is a mandatory demo for everyone because of its really fresh and unique ideas. After playing through the demo you’ll know whether it’s up your alley.

Dead Block… is strange. It combines new ideas, the thematic success and zombies and achieves something new that works but can be flawed at times. Having to salvage resources from each place of defense makes for a very interesting strategy, unfortunately there’s no strategic value to the items before they’re destroyed, so they’re more like materials you mine than defenses you’re re-positioning. Using traps to slow or defeat zombies works really well, the mechanic is solid and it makes sense. However, like the gathering of resources, the trap mechanic sometimes falls short; ideally trap effects can be compounded for devilishly potent tactical zombie takedowns, but in several cases the best strategy boils down to barricades and frost traps.

The game is a mix of ups and downs. It’s easy one moment and very difficult the next (usually when the construction worker isn’t playable); it’s entertaining one moment then slow and dry the next. Strategists should look into this game, so should zombie-lovers and those with siblings with whom they play tactical games, but playing the demo is an absolute must first.