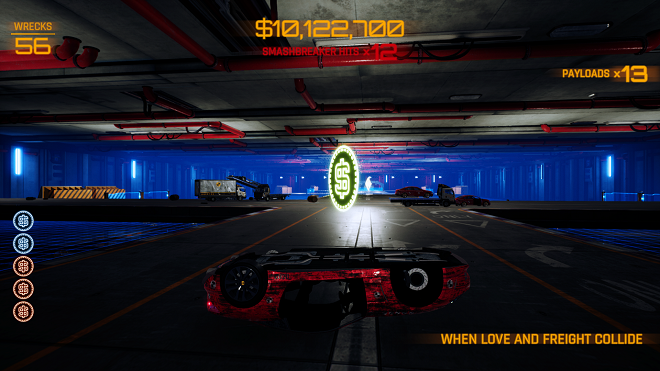 As Xbox One embraces its roots by introducing back-compatibility with select titles from the original Xbox, the nostalgic fan’s thoughts return to classics from that era. Driving fans will no doubt remember one of the best franchises from the “naughts,” Burnout. Along with frenetic racing action, players also got the chance to enter Crash Mode, with the intent of causing as much vehicular carnage as possible. Three Fields Entertainment gives today’s Xbox One gamers just the antidote to relive the excitement of Crash Mode, Danger Zone.

The astute gamer should be forgiven for calling Danger Zone a knock-off of Burnout because the similarity goes far deeper. Three Fields Entertainment’s founders also started Criterion Games, the studio that brought Burnout to life, so they know their craft. This time, players enter a giant three-dimensional simulator reminiscent of a Star Trek holodeck, which generates various scenarios that encourage players to smash and crash with the wildest of wild abandon. Cause enough damage, and you earn the ability to detonate your car and cause even more chaos. Sets the hook deep – Each scenario opens with a flyby of the game world, complete with entry and exit points for the simulated traffic. That’s all fine and good, but that’s not what fuels one’s competitive spirit. It’s those darn medals and leaderboards displayed before and after the level. Crashes award cash and medals are awarded at certain level-specific scores, with a bronze medal required to advance to the next level. After you earn that requisite bronze, you could go to the next level, but that silver medal is oh so close, isn’t it? Then there’s that know-it-all gamer who got another million bucks more than you on the leaderboard… and so it goes.

Gets to the point – The game does have a tutorial level, but oddly it’s not the first element available on the game’s menu. Nevertheless, take a few moments to work through it, as it introduces the secret to scoring big: collectibles. Coin icons add bonus cash, while collecting them all adds even more, and collecting them in a certain order breaks the bank. Diamond-shaped crash icons add a bonus “smashbreaker” (another homage to Burnout and its “crashbreaker” mechanic), giving you another chance to explode and guide the car into more traffic or other pick-ups.

Variety isn’t just a spice of life – Danger Zone offers a pretty good range of environments, obstacles and vehicles. You could unleash your mayhem using a nondescript family sedan on one level, then an open-wheel racer on the next. Some levels are totally flat, others have ramps and barriers, and still, others require you to use your smashbreakers to literally jump your car around the level. To boost the challenge, most levels lack guard rails, which makes it possible to knock vehicles off of the virtual world (that’s good) and for you to fall off yourself (that’s bad, as it will fail the level, even if you’ve earned enough cash to medal). 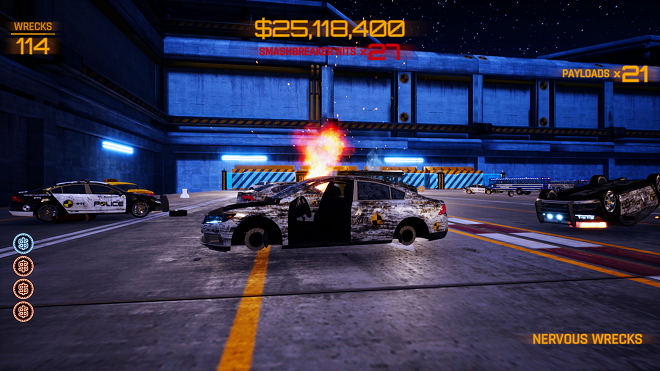 This … Is … SPARTAN! – Danger Zone has some pretty good graphical presentation, including tons of infographics and statistics for those that enjoy that sort of thing. But there are flaws, such as cars that have lost their tires hovering in space or wreckage doing its impression of a “Simpsons” washing machine (Google/Bing “Brother, Can You Spare Two Dimes?”). The game’s musical selection also leaves a lot to be desired; more to the point, there isn’t any music. All you get are sound effects – tire squeal, crashes, explosions, sirens and what-not. Lastly, there’s no option to change vehicles in order to cause greater havoc; in fairness, the chosen car for each level can score the coveted gold and platinum medals, when you figure out how to work the given level.

Paging Isaac Newton – Coupled with the ability to explode your car on demand is the Burnout concept of “aftertouch”, the ability to direct the car’s momentum in the needed direction, such as into more traffic or into a group of bonus icons. In the Burnout model, the physics of all this worked pretty much as it would in the real world, assuming one could actually detonate their vehicle multiple times without replenishing anything. But in Danger Zone, things get more preposterous. You can move side-to-side during jumps, use stored smashbreakers to double-jump around, or get more boost by detonating a smashbreaker near certain vehicles. The last part would make sense for a fuel tanker, but instead, you get it with a school bus, of all things. About the only rationalization I have for this is the virtual simulation setting, where real-world physics don’t fully apply.

That’s it?!? – Danger Zone features four tiers, each with eight crash junctions. While there are aforementioned incentives to return to a given level, those incentives all but disappear after you’ve completed the game’s 13 achievements. This is a game that would benefit from add-on DLC or, even better, user-generated content. With the number of Burnout fans out there and the game’s “holodeck” concept to allow imaginations to run wild, the community could keep the game going long after its 1000 Gamerscore is tallied. 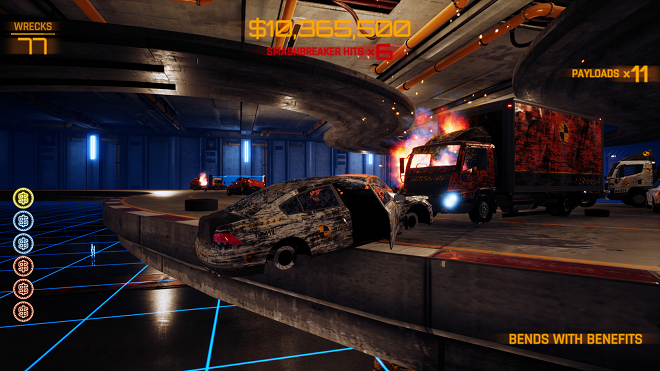 As I was playing through Danger Zone, my general opinion of the game kept jumping around as often as my car did. I love the crash junctions from Burnout, and the puzzle nature of trying to obtain the pick-ups. With that said, I wish there was simply more to it and that it was a bit more polished up, especially considering the game’s development pedigree. Three Fields knows its stuff, and I sincerely hope there is enough demand from franchise fans to prompt planning for either a DLC expansion or a Danger Zone 2 with a level editor. The fact that the game will get Xbox One X enhancements and 4K output in the near future offers that hope. So, if wanton destruction and a relatively easy 1000 Gamerscore are your thing, queue up Kenny Loggins and take this highway to the Danger Zone.

Danger Zone was developed and published by Three Fields Entertainment. It was released on October 9, 2017, for $14.99. A copy was provided for review purposes. 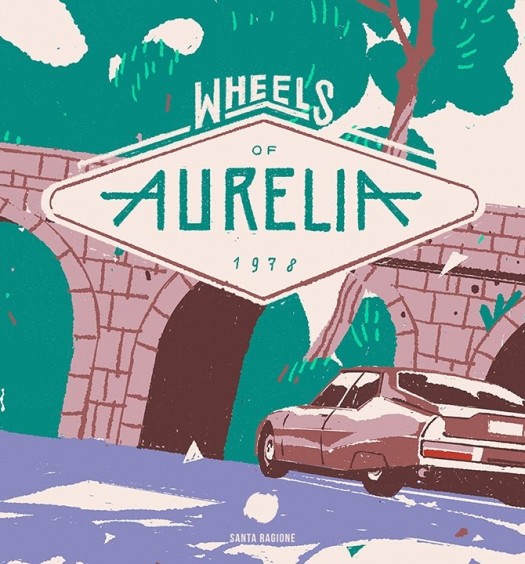