I’m not sure how coffee, metal, and aliens became a tied together video game idea, but I do know I like all three. Invading aliens need coffee and metal music to fuel their world. You control coffee baristas who randomly decide they are going to be the heroes. It’s a short game without much replayability, like drinking coffee without any cream or sugar.

Metal – Being a fan of the music genre, I can really appreciate the Metal soundtrack as I played through the game. While there was little in the means of variety, it didn’t seem to matter. There is definite enjoyment in beating up enemies while a killer riff was blasting over the sound effects. Even certain bosses would jam randomly to summon more aliens. There’s even an achievement for letting one of them finish their song!

Unique and Strange – With quite a minor plot, there are at least funny themes spread throughout.  Among the aliens, you will be fighting brainwashed humans as well. There are plenty of whacky ideas, with one of the most absurd being elderly. Fighting people with walkers and even aliens in wheelchairs may seem like an easy fight, but the extraterrestrials control this bunch of pensioners. It’s just a shame there are no dentures flying out of their mouths when you whack them with a bat. 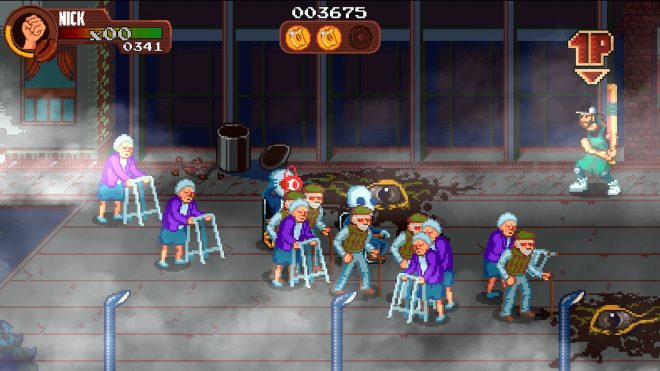 Pickups and Modifiers – Destroying certain objects can reveal a pickup. You can find health, invincibility, and damage modifiers. Because they are random, you will get them at bad times. Finish a fight, and suddenly you can grab the invincibility. It then runs out as you head to the next wave of enemies. I would have rather chose when to use the power. Also, the damage modifier doesn’t even seem to do anything at all (I couldn’t tell if it was doing much more harm). Modifiers are basically just graphical effects that get in the way. I’m not sure why this gimmick was used, but it didn’t seem to change much of the playthrough. Some are still easy enough for it not to matter and others make it almost unplayable. They also don’t last very long, and you can even pick up a powerup that turns it into tube TV mode, allowing you to see much easier. When you’re introduced to modifiers, you get let down that they’re just simple screen adjustments that do nothing to make the game any more challenging.

Ranged Attacks – Almost half of the enemies have some type of projectile they can shoot at you. Fighting too many of them at once can be extremely annoying. While there are two weapons that can shoot projectiles, you’ll seldom find them. Instead of finding the nearest shotgun or uzi, you’re left using your employers coffee tools. I don’t like to complain about the lack of shooting in a side-scrolling punching game, but the enemies are firing on you while you jump around kicking like a maniac.

Fighting Mechanics – You have basic attacks and an AOE based attack that consumes your health. That’s really all there is to it. You’ll find yourself jump-attacking most of the game since you’ll be constantly interrupted if you stand there trying to use the basic one. Weapons picked up can easily be knocked from your hands and don’t seem to add much reach or damage. They seem like more of a distraction. There are simply too many enemies on screen to deal with. You cannot block or throw weapons you pick up, which means you’ll probably never use them at all besides trying to add a different feeling to your repetitive fighting. 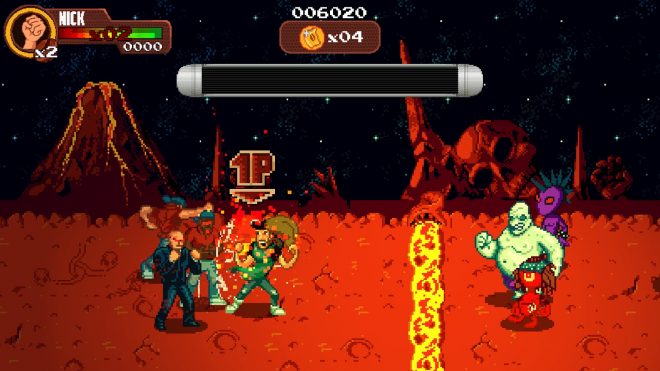 It’s a game you will want to like and respect because of the retro feeling that it provides. Having goofy characters and themes does help, but everything else seems to fall apart as you realize you’re just not having all that much fun. It’s a short game that allows you to get all but three achievements easily. You likely won’t have the patience to play the more difficult modes. Cooperative couch play is a minor bonus but there is no online to be seen. I commend the approach but don’t feel it harbored any real interest. Void of any replayability or extra content, Coffee Crisis leaves us with a short and unrememberable creative idea.

Coffee Crisis was developed by Mega Cat Studios and published by E360 Technologies LLC on Xbox One. It was released on August 15, 2018, for $10.99. A copy was provided by the publisher for review purposes. 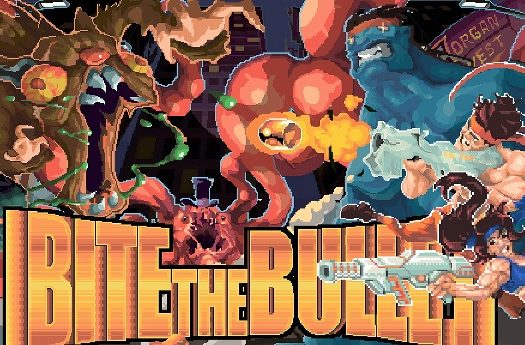