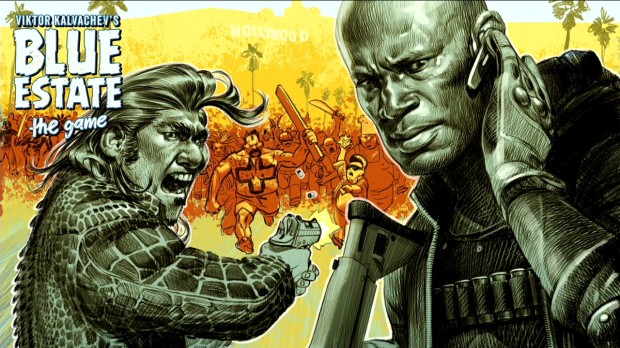 ??? — Nothing. Blue Estate doesn’t do anything especially well, so there isn’t anything worth praising here, but I don’t actually dislike the game either. The gameplay is solid, but it’s not mindblowing. The music is nothing special. I didn’t hate it, but I tried not to listen to too much of it as it was very basic. The story tells itself and while very bizarre, it’s neither revolutionary nor something you’ll lose sleep over. Many gameplay segments require you to make gestures similar to Quick Time Events that can be done with either the left stick on a controller or with hand motions via Kinect. These gestures become unwanted after awhile as many of the gestures feel added in to check if a player is paying attention. By adding all of these little pieces together HESAW has created a fun experience. Wait, fun experience? To get the best experience with a rail shooter the player needs to overlook anything and everything so long as the controls are functional and the game has a purpose. Well, the controls work well, and the game at least tries to tell a story. Check and check. Some Kinect controls — The controls should be a strong point, and they mostly are, but each particular control scheme has a minor issue that takes away from it. Blue Estate is designed with the Xbox One Kinect in mind, and it shows. The Kinect functions well and makes for a sort of arcade light gun experience without the light gun accessory. I had no problem with the tracking, and there isn’t anything negative to say about the commands. The fatal flaw to the Kinect controls is, interestingly, both a good and bad feature. The gun will auto-shoot for you when your cursor is near or on top of an object of interest (enemy or collectible). This makes it incredibly hard to shoot precisely and may cause players to expend a few extra rounds of ammo that they might have needed for a different enemy. The game is entirely playable with Kinect, but for the pure high score pursuits that rail shooters typically encourage, Kinect is not the way to go. Coincidentally, if you do happen to have a local co-op friend to play with, both players on Kinect would probably be the way to go to squeeze the most amount of fun out of the experience.

Some Xbox One gamepad controls — Because of the auto-shoot function mentioned above, the controller will probably be the default scheme for players wishing to play this game seriously. The one major problem is that there is no sensitivity option. If you’re happy with the speed of the cursor, this won’t be an issue. I would have liked the cursor to be a bit faster since I found myself at times struggling to drag the cursor around the screen fast enough to aim at some targets. Sensitivity adjustments would have been a welcome feature.

??? part 2 — There isn’t much in Blue Estate to strongly dislike. The controls might actually be the highlight, but that comes with the aforementioned caveats. I came into this game expecting a rail shooter, and it functions well as such. As a word of warning, though, some players may find the story levels a bit long and dragging. I’m strongly neutral about this game. Blue Estate is fun to play if you go in without any expectations. Story mode features seven levels and tells a very strange and quirky story. Once you play through it, you might or might not feel inspired to attempt improving your scores depending on what kind of gamer you are. Arcade mode extends the life of the game by giving a shorter, more high-octane experience thanks to its non-stop enemy sequences and a progression sequence to different guns based on kill count. A small timer set to between four and six seconds (depending on difficulty) keeps Arcade moving as players have to kill an enemy within that time span to reset the timer and avoid a game over. You’ll get plenty of value for your purchase, and if you like rail shooters, you’ll like this game. Otherwise, stay away.

Achievement Notes: Blue Estate takes about 10-15 hours to earn the 1k Gamerscore. Each full playthrough of the game is about two and a half to three hours depending on whether or not  you skip the cutscenes. With a rail shooter, expect collectibles to show up and some to only appear for a very short time. At times the game may feel difficult, but with enough time and practice, everything can be done.