Released initially as episodic, Bendy and the Ink Machine is delivered on Xbox all at once with no waiting. You will play as Henry, a cartoonist that is invited back to the old studio at which he and his partner worked. From here, there is a mystery that unfolds that becomes dark and eerie. A mix of horror and cartoon is blended well into puzzles that mostly involve searching the building for parts. It reminds me of the older cartoons, like Steamboat Willie starring Micky Mouse. Ink plays a huge role, usually one which stops you from proceeding or produces enemies you must defeat. Death is never certain. You will just crawl through a tunnel and appear again and be able to try again. It can even be completed in one sitting if you have time in the day for it. Chances are you will have missed something that was hidden. There are several clever secrets to discover. It’s a unique and almost humorous world consumed by a darkness that you’ll enjoy getting to know. 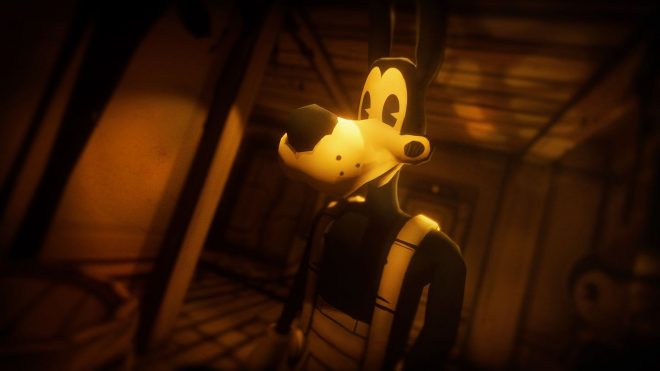 Cartoon Horror — It’s hard to imagine your favorite cartoons suddenly becoming evil and hunting you in the place they were created. There are plenty of jump-scares and times you just run and hide. My favorite parts include needing to run and hide in what I guess are wooden closets. You can see the evil ink foes searching while you are patiently waiting for their departure. Bendy, the main antagonist, is creepy and cannot be defeated. While playing, you’ll start to run into him, and he’ll just appear causing the world around you to turn sinister looking. It’s sort of like Silent Hill when the sirens are going off. It gives you a sense of urgency to hide. In fact, I even think of it as Pyramid Head lurking around. You can’t do anything but hiding and hope you don’t get caught. At the same time, it’s like visiting an amusement park and going on a ride that has painted a scene that you can become a part of for a short time.

Puzzles and Finding Items — The puzzles in this game mostly involve finding items. The beauty is that the items that are hidden have several randomly generated areas they can spawn. Not every playthrough will be exactly the same. Some may think it’s annoying to have to go on a witch hunt for items, looking in every nook and cranny. I think it was a nice touch to really encourage seeing everything around you. Besides the fetch quests, there are also some puzzles I really enjoyed. One has you playing instruments in a certain order. That order is also random. You must find the information out and then play the order based on the hints you are given. There is a twist to get the effect to trigger, which is the tough part. I liked having little breaks in the middle of all the chaos.

Characters — There are plenty of curious characters that inhabit the studio. The first one you meet will look like a familiar Disney toon. He’s the quiet type, and you finally receive hope from an unlikely ally. What’s particularly interesting is that there seems to be a couple of ink creations that are on the good side of morality. There is a bizarre gang of three enemies that will make a few appearances, and even though they’re not exactly horrifying, you still end up running from them as if they were.  I have a feeling they borrowed ideas from many other survival horror games and threw in their cartoon twist. It’s almost magical how it all worked out. The idea seems silly, but they pulled it off. I won’t give away anything about the boss encounters, but they’re also quite interesting.

Sound — To a degree, there’s nothing wrong with the sound effects or music. The issue is realizing it’s there. It seems softer than it should be. Sure, there are jump-scares, but if they utilized loud sound effects, they would be so much better. Sound effects are important in cartoons, and they’re generally quite loud and obnoxious. A twist on the normally funny sounds, making them dreadful to hear, would have added some suspense. The music is really good but a bit on the light side. It didn’t command your surroundings but instead was an afterthought.

Attacking — You’ll miss enemies so much you’ll think you’re fighting pinatas with a blindfold on. There are times you’re sure you’ve connected an attack but actually missed completely. I don’t know if it’s bad hit-detection or done on purpose to create more difficulty. What I do know is that it’s pretty annoying. There was even one situation in a larger scale fight where an enemy was invulnerable to my attacks. I hit it several times at all angles, yet it still would not detect a hit. I ended up having to restart the checkpoint. Most of the enemies you face are shorter than you, and you have to look down while attacking. I know the game isn’t all about fighting things, but it takes a little away from an enjoyable experience.

An unlikely mix of survival horror and cartoons work smoothly together. Bendy and the Ink Machine succeeds in combining two very different genres into one. It’s as if you were playing inside a child’s nightmare.  The game suffers a little when it comes to the combat but, luckily that is a minor focus in the game. Even though it’s a pretty short game with little to no replay value, you can expect to have a memorable time.

Bendy and the Ink Machine was published by Rooster Teeth Games and developed by Joey Drew Studios Inc. on Xbox One. It was released on November 20, 2018, for $19.99. A copy was provided by the publisher for review purposes.