Worlds apart – It’s hard to escape Tolkien’s legacy when it comes to fantasy, which – through sheer ubiquity – has become the de facto source for inspiration where fantastical weapons and monsters are concerned. Signal Studios refreshingly sidesteps yet another trip to that well, offering through Ascend something much more primal and ambiguous than the clean lines of good versus evil. Its atmosphere is thick with a sense that the world has existed for eons; grown stagnant in the survival-of-the-fittest hierarchy established in the shadow of the Titan.

There’s no one component of Ascend that really cements this presentation. It’s a combination of the dull-grey aesthetic clashed against the lush bloom of nature and the vibrant influence of the new gods. It’s the literal scale of the land, reinforcing the fact you’re neither the master nor the victim, as you tromp through matchstick human settlements and cower beneath gargantuan stone architecture. It’s the chirps and growls and bellows of the land’s inhabitants – and their varied death rattles – punctuating a constant soundtrack of thumping drums and forceful horn blasts, instilling a feeling of grandiose when it all comes together.

Blood, sweat and souls – The crux of Ascend is the brutal, bloody combat. It unfolds in a non-stop slugfest punctuated by savage executions against a bestiary that ranges dramatically in size and strength: trolls half your stature, brutes much larger than you and hulking Ogres at twice your height and many times your mass, batting you around like a plaything. You engage these creatures through Ascend‘s pick-up-and-play mashing of fast and slow attacks that’s deceptively simple at first, hiding its real depth once you’ve studied each species and their strategies. Since enemy levels are tethered to your progress – increasing in relation to yours – knowing when to launch a flurry of attacks, break guards with powerful swings or simply dash away and block, becomes necessary for survival. You’ll never be in a position to “farm” low-level areas; the threat of being overwhelmed, no matter how small, always nips at your heels.

Yet Ascend incentivizes you for excelling in battle with a combo multiplier that builds over successive hits, without getting tagged yourself. The greater your multiplier, the greater your harvest of souls – the game’s only currency – from your fallen enemies. With its singular currency, Signal Studios deftly averts the “pay-to-win” dilemma through a creative rock-paper-scissors cycle: performing well in combat rewards more souls, which are needed to purchase and maintain equipment, which is needed to perform well in combat, which rewards more souls, etc. While packs of souls are purchasable, doing so only resets the cycle – you’ll eventually need more souls to sustain the equipment you’ve purchased, meaning you’ll be back in the breach before long. It’s a nice way to upgrade a spell or snag a few pieces of armor you’ve been eyeing, but you’ll never have to spend a cent to stay competitive; your Caos is entirely self-sufficient from beginning to end. Make your mark – Ascend: Hand of Kul‘s ability to instill the feeling that its world will carry on without your interference is a testament to its murky atmosphere, but it also tempers that indifference with detailed customization and choice throughout. You’ll bind yourself to a new god, paving a route to power through the spells and emblems they grant each time your character ascends his mortal bonds and is born anew. While your god of choice does communicate with you throughout the overarching story, the real reminder that you’re tethered to the divine comes from the visual changes that envelop the environment when you claim an altar or shrine in their names. Gazing off in the distance to see the bright pillars of the Light, the smoldering ash of Darkness or the swirling nether of the Void helps to solidify that you’re leaving your mark on this place.

Of course, the real customization comes with your character’s progression from newborn warrior to unstoppable force of the gods, through the purchase and collection of equipment – which is some of the most imaginative and finely designed in recent memory. Each piece of armor has its own strengths and weaknesses while every weapon type has its own set of attacks, changing the style in which you fight and the way you deal with situations. As you grow in power, you’ll outfit your Caos with alignment-specific equipment that are wildly dramatic in presentation and function, signifying your attunement to the path you’ve chosen. In this way, each iteration of your character becomes its own entity – a road map of your accomplishment – when you see them all standing side by side in the Sanctum of the gods. 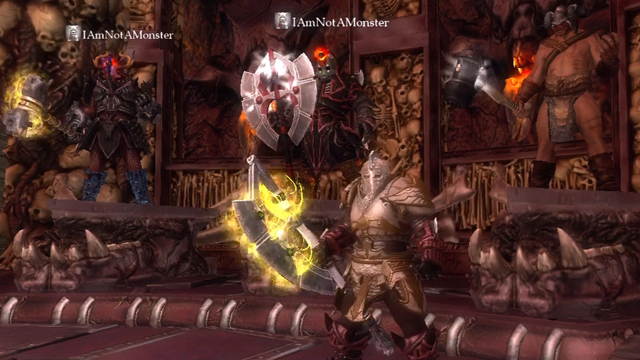 Balance of power – Though the game’s narrative follows a linear path en route to your showdown with the Titan, it’s the hundreds and thousands of like-minded players that prevent Ascend from every really growing stale. Much like the way Dark Souls revealed shades of other players in the world, Ascend populates your area or dungeon with a few random players fighting their own monsters in their own dimensions. It’s possible to communicate with these Caos through voice chat and body language, but the meaningful interaction comes in the form of curses and blessings – through which you drop totems into their reality with helpful and hurtful results – or banish enemies from your world into theirs.

The other aspect of community interaction is the Crusade, a persistent war for dominion over the continent. It’s basically an asynchronous turf war waged by player-created, AI-controlled characters, which attempt to convert your altars and shrines toward their respective alignments. This regularly manifests itself in the form of an invading enemy Caos, giving you the option to instantly warp to the incursion and repel the attack. Should you ignore or fail to fend off the intrusion, you’ll weaken your faction, and factions play an important role in Ascend; weekly challenges and events reward the faction with the greatest influence, tallying the millions of captured shrines and altars. It’s an ambitious feature, and through it Signal Studios has created a living, breathing game-within-a-game that you’re never disconnected from. 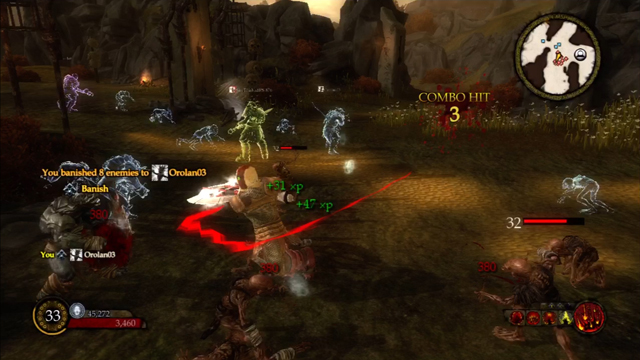 The price of performance – The downside to everything we admire about Ascend is that it’s all happening at once: intricately detailed equipment, creatures and environments; the immersive presentation and the constant connectivity with other players. All this occasionally culminates in a noticeable slowdown when too many enemies and players – and all their spells and attacks – erupt in unison around you. There’s understandably a massive processing draw that arises when you’re constantly factoring the actions of a million players worldwide, but the drop can be so pervasive at times that it completely negates the fast-paced combo system and time-sensitive blocking.

Similarly, the rare hardlock rears its ugly head now and again, seemingly related to interacting with the servers; once or twice when scrolling through menu tabs, once or twice when loading a new area. The damage is almost entirely mitigated by Ascend‘s frequent and unobtrusive autosaves, so you’re never in real danger of losing data or progress. Still, the technical hiccups are an unfortunate blemish on an otherwise smooth and responsive design.

Locked away – For all the content packed into Ascend, there are features teased within game that have yet to become a reality. Within the Sanctum, locked doors allude to player-versus-player warfare, an endless dungeon and cooperative multiplayer. Though Ascend is both still in beta and operating as a free-to-play “service” rather than a traditional retail release, the fact these features are teased but unavailable is somewhat disappointing. Signal Studios has plans to update their title with continuous content, including these features, but when you wrap up the main story less than halfway to level cap, grinding the rest of the way to the top offers little variety. It’s a small gripe that’s only valid until these features are introduced, but for the time being, those locked doors offer a glimpse of the future with little to do but wait. 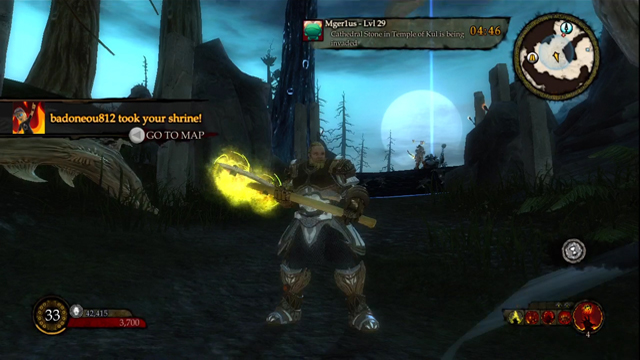 It would be easy to sum up Ascend as a fantastic free-to-play game, brandishing a level of creativity and commitment rarely found within its distribution model, but that would be a grave disservice. Ascend: Hand of Kul is a fantastic game – period. Despite minor technical wrinkles, Signal Studios has delivered one of the best hack-and-slash titles ever to grace Xbox Live Arcade, loaded with personality, creativity and ambition; it also happens to be free.

Ascend: Hand of Kul‘s lack of a price tag renders our three-point review scale – Skip It, Try It, Buy It – a skosh inadequate when conveying our feelings about the title. We can’t recommend you literally purchase the game. Instead, view our score in terms relative to your investment. There are many, many games out there – some free, most not – and of all of those possibilities, Ascend: Hand of Kul is deserving of your attention.