Even if you’ve never played a video game before in your life, you won’t have trouble deducing where not to go in Adventures of Pip. A series of floating skull and crossbones symbols hover above each of the platformer’s bottomless pits. It’s an unambiguous message from the developers conveyed through art.

Tic Toc Games CEO Shereef Morse didn’t want to leave anything to guesswork. “It’s like, ‘Hey guys, you don’t want to go down there, all right?'” he told XBLA Fans at PAX East last month. “We said, ‘Why leave it to guessing, right?'”

Not unlike the studio’s approach to visualizing the dangers of bottomless pits, its central gameplay mechanic is also a very on-the-nose artistic reference to something — art itself. Adventures of Pip tells the story of a one-pixel underdog named Pip who gains the ability to be rendered in more pixels as he quests towards defeating the evil Skeleton Queen. If that sounds vaguely familiar, it’s meant to: Adventures of Pip is also the story of the games industry’s art evolution and what game art has had to give up in order to evolve.

The idea for this metaphor began germinating around 13 years ago — even if Morse didn’t realize it back then. In 2002 Morse was working as a production manager at WayForward Technologies, and he hired a promising young artist, Marc Gomez, fresh off an education at California Institute of the Arts. Gomez would go on create art for A Boy and His Blob, Contra 4 and Bloodrayne: Betrayal among others. The only thing those three games have in common with one another is that they share absolutely nothing in common, which is exactly the point. Years later, when Morse hired Gomez as his creative director at Tic Toc, it occurred to him that Gomez’s art styles had frequently changed during his time at WayForward. So had the industry’s at large. 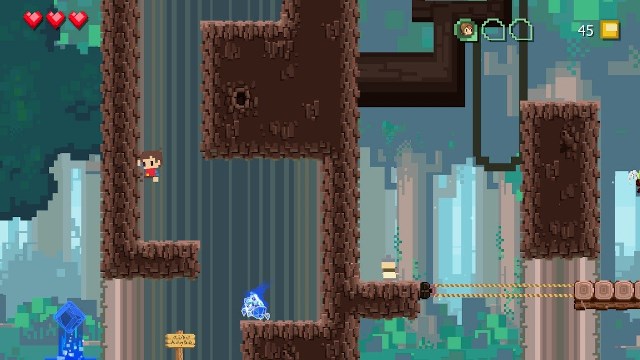 “So when we were talking about [Adventures of Pip] we were talking about how art has constantly evolved from the pixel art to hand-drawn traditional animation and 3D,” recalled Morse. “And so [Gomez] wanted to make a game that kind of spoke to that, and we were trying to think of the different ways of telling that story and also having the gameplay supplement that as well, not just be a novelty thing.

“So my background is in sociology, so we got this caste system in there and our evolution. Then we met with Sean [Velasco] and a few other people from Yacht Club [Games], and we came up with this lock and key mechanic that wasn’t so lock and key. It was more like — it’s more level design.”

As XBLA Fans explored in our Adventures of Pip preview, the titular character has no choice but to evolve in order to progress through each level. Pip evolves by absorbing certain enemies’ pixels, and he is granted new abilities when he does. As an 8-bit character he can run, punch and wall-jump. As a 16-bit version of himself he can swing a sword and push blocks around to solve puzzles. Permanently remaining in the latter two higher-pixel forms isn’t going to work, though; single-pixel Pip is the only version that can bounce the highest and fit into the smallest of spaces.

This would seem to speak to the industry’s losing a little something when it largely moved away from simpler art styles and towards more photorealistic ones over the past 20 years. The need to devolve wasn’t explicitly inserted into Adventures of Pip as a statement about that loss, but in a follow-up email to our original interview, Morse agreed that there was something to that point.

“I remember working with Matt Bozon [creative director] at Wayforward and how he could make a full 360 view of Shantae in pixel art on [Game Boy Color] and how amazing it looked, or how small [Gameplay Engineer & Programmer] Jimmy Huey would keep his code so we could cram as much as we could into a small cart size,” Morse wrote. “Nowadays we’re spoiled by what platforms can do. It’s awesome how powerful things have gotten, but we are losing a bit of the art form of keeping it small to get the most out of it. Maybe Pip is a reminder that keeping it small and simple can still be fun.”

The evolve/devolve mechanic is a unique way to wrap three characters into one, but Morse and Gomez didn’t expressly design Pip to be something exceptional.

“I think we wanted to…just wanted to make this game,” he reflected at PAX. “It wasn’t about ‘Let’s come up with something different.’ The whole way we went about development was [Gomez] wanted to do the story of the art evolution and his career, and I wanted to make sure it was very ingrained into level design, and it wasn’t so novel. I didn’t want to make something just for novelty’s sake. It’s got to be a game first.”

While Morse focused on designing something that was fun to play, Gomez had his eye on the evolving art of video games — but also on sending another message. The reason that each of Pip’s evolutions has its own power “is to prove that there is something special and unique in each and every one of us,” he told XBLA Fans via email. “This carries over into video games as well. There are beautiful gems of games that are coming out right now, but they don’t take away from what was great from the games of the past.”

Gomez added that he wants to see the industry continue to push forward and break boundaries in both story and gameplay. “Graphics are just a stylistic choice that should be chosen as what fits best for the game you are trying to make. I don’t think there is a superior approach from one end or another.”

Still, back at PAX, Morse conceded that Tic Toc ultimately “kind of designed something that we felt was unique and innovative and meaningful all at the same time.”

It’s likely that’s exactly what the studio needed to do to impress gamers. After all, Morse admitted that there is no shortage of great pixelated games releasing onto the market these days. He cited Shovel Knight from his friends at Yacht Club as one of them.

But he doesn’t sound worried about the ubiquity of the pixel in 2015. If anything, it’s made him feel like he’s gone home again. “When I look at the teams that are doing them, it’s like we’re working in the industry back when we were still working on Game Boy Color and Game Boy Advance.”

That he’s once again working with the same artist from that era on a pixel game of their own probably isn’t doing much to abate that feeling. Read More
We Are Doomed preview: Playing with fire

The Swindle is designed to be a stealth game for people who hate stealth ga...