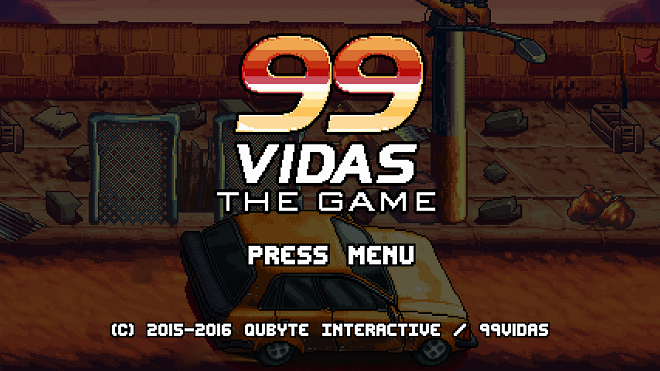 Arcades and consoles in the latter 1980s and early 1990s were filled with games that may have featured different characters, but the gist of the game was exactly the same – battle against endless hordes of grunts and take back your streets. Be it Metro City, New York or whatever city the Double Dragon duo inhabited, brawlers ruled the roost. Xbox One owners can now enjoy a superb 21st-century love letter to the genre, 99Vidas, which means “99 lives” in Portuguese, the mother tongue of Brazilian developers QuByte Interactive.

Up to four players can choose from a range of characters, each with an elemental-based power, to reclaim the 99 Vidas, a relic now in the hands of an enigmatic villain who controls legions of grunts and bosses. As players score points, they can use those points to purchase upgrades for their characters, giving them boosted attacks and, if desired, additional lives. 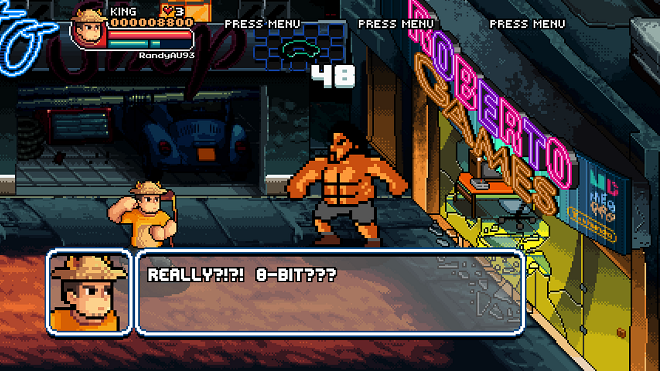 “I remember that!” – 99Vidas tells its story through colorful 16-bit-style graphics, and at first, it may even seem a bit derivative, but that’s honestly the point. Throughout the adventure, you’ll see all sorts of nods to its ancestors. The roll-up garage door from Double Dragon. The destructible scenery and weapons from Final Fight. Even the soundtrack recalls Yuzo Koshiro’s amazing Streets of Rage score. When you’re not busy cracking skulls, you’re looking for more references.

No walk in the park – The enemies in the game match the archetypes established by its predecessors quite well. First, you get grunts, then hulking bouncers, then knife-wielding henchmen, then femmes fatales, and so forth. Each one is more challenging than the last, both in strength and in fighting style. Their AI is impressive; enemies back off when challenged, they actively attempt to outflank you and they can be tough nuts to crack. With each player character having different traits, you’ll likely find a character that matches your style and desired level of challenge.

Sharp controls – Brawlers don’t have the most complex control system, and 99Vidas is no exception to that rule. The left stick or D-pad controls your eight-directional movement, and the XYAB button array starts your fists and feet flying. Button and control combos work well but do seem to work better when using the D-pad. In my experience, I preferred using the left stick to move during transitions and the D-pad for actual combat.

Couch or no couch – Like its arcade predecessors, 99Vidas is best enjoyed with friends locally, but the game can also be played online, with additional players coming from Xbox Live. As stated earlier, the game is not easy, so having friends along for the ride, regardless of their physical location, will make recovering the 99 Vidas seem just that little bit less difficult. 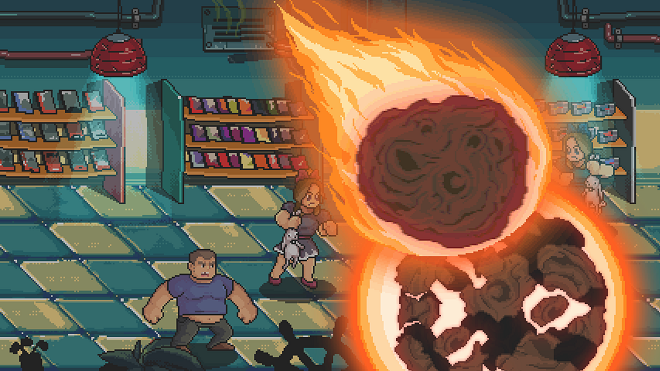 Things better forgotten – 99Vidas borrows heavily from Final Fight for much of its combat system, but its “magic” system, so to speak, harkens back to Sega’s Golden Axe. Players start with a full magic meter, which will unleash a screen-clearing attack based on their elemental power that will consume the entire meter. After that, players collect magic with each wave of enemies defeated. When the bar reaches 50%, a less-powerful variant can be summoned, which will leave any excess beyond 50% for later use. Unfortunately, just like Golden Axe, players have no ability to choose how they wish to use that meter. If you have a full bar, you’ll use it all, with no option to use the weaker 50% attack twice.

It really is dangerous to go alone – It’s hard not to bring this up again, but this game, like other brawlers, practically demands multiplayer. It is possible to go through the game solo, but it will be much more challenging, and part of that is due to the game’s continue system. Arcade brawlers would let you feed in quarters/tokens/credits endlessly until you beat the game, but if you lose your final life in 99Vidas solo, you’re done for that session. You are given unlimited chances to continue at the start of the current level, but you’ll do so with the number of lives you had at the start of that level and not the five at the start of the game. Compounding this is that your save point is set after you close out of the in-game store – no option to purchase more lives (2000 points each) or make any other adjustments. So, if you get to a position where you’re stuck but you have just a single life at the start of the level, about all you can do is start over from the beginning. If there’s any good out of this setup, it’s that the upgrades you buy for characters (other than additional lives) are permanent, allowing you to start over with a more powered-up character. 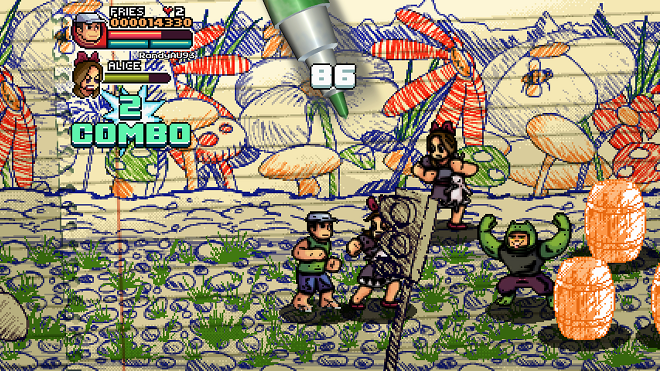 As a child of the 1980s and 1990s, brawlers have been one of my favorite genres. They’re great in small doses if you need to work out some aggression, and yet they’re also fun when you wanna power through them and get to that ending. QuByte has shown that the genre has a spot in their hearts, as well, and they’re helping share the love by giving the game a sub-$10 price point. Without a doubt, 99Vidas will rough you up, but it’s also charming enough to help you back onto your feet, dust you off and welcome you back for another go with no hard feelings.

99Vidas was developed and published by QuByte Interactive. It was released on November 2, 2017, for $9.99. The reviewer used their personal copy of the game for the purpose of this review. 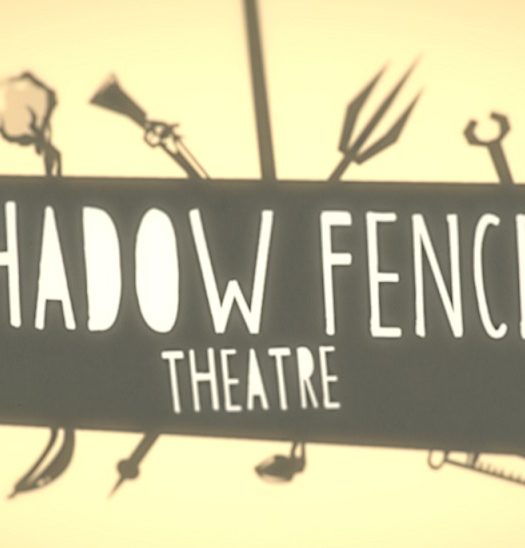