20XX doesn’t pretend to be an original idea. Clearly inspired by Mega Man, this game takes being an action platformer to another level by adding in roguelike gameplay. Overall, it’s a very short game, being able to be finished in less than an hour. That is if you can complete it. The combination of a platformer with a roguelike will test your patience as well as your morale.

Controls — Dashing and jumping can feel really good in this game. It’s a blast leaping over obstacles and enemies, landing on platforms almost too small to land on. It’s easy to get the hang of, and you feel almost like you’re a professional platforming maniac. Walls can be used as a foothold or you can leap off of them. Your movements are very fluid and as you progress, you will get speed upgrades that allow for some extremely fast gameplay. Though, there is such a thing as too fast, so be careful or you’ll have trouble landing certain jumps. Sometimes there is a lot going on, but it’s easy to keep track of where you should be when attacks are flying at you from various directions. 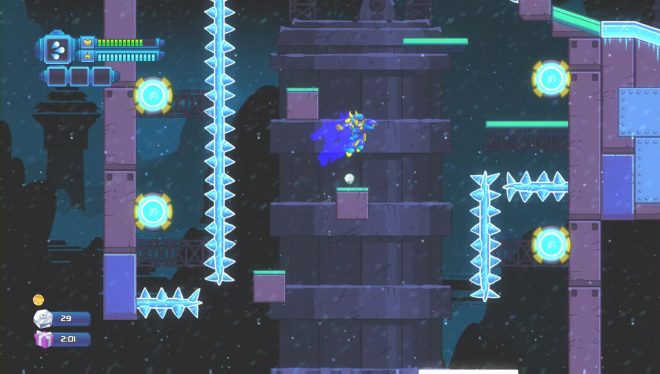 Graphics/Style — The colors and atmosphere in 20XX are well done. Behind all the action, you will notice pretty backdrops. The lighting effects and chaos of lasers and enemies don’t hinder the game one bit. The game’s menu is easy to read and the HUD is perfect. You’ll always know how near death you are with a quick glance. The loading times are extremely fast as well, so overall it is pure excellence. 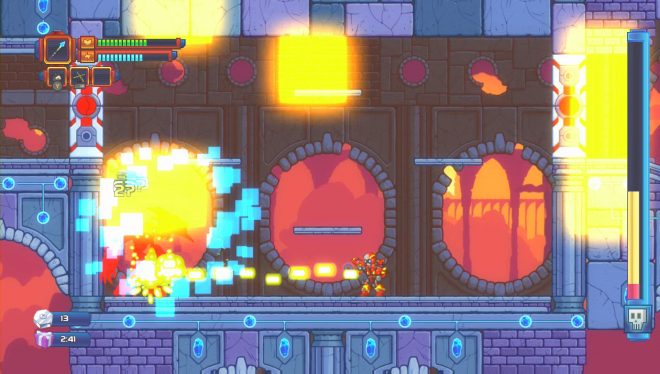 Options/Upgrades — In 20XX, you get to choose what you want to upgrade. You are in control of how your character gets built up throughout your playthroughs. You can even have different weapons. Even with RNG, this allows you to customize your character to your liking. Want a different weapon? You have a few to find and choose from. However, I do wish you could choose what one you wanted to start off with. I also wish there was a mode you could play to max your character out to be able to play levels extremely overpowered. Then again they do have an endless mode! 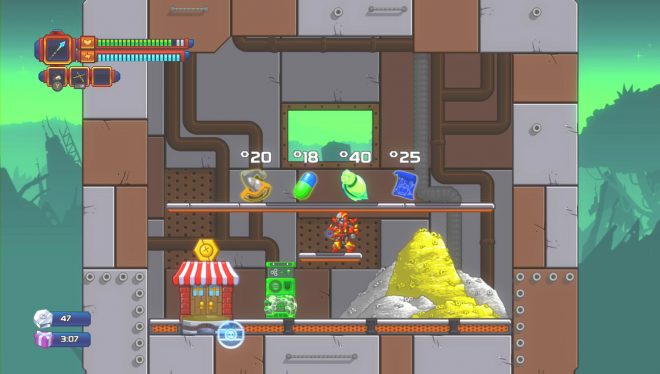 Bosses — Each time you start a level you get to choose from three bosses. The bosses vary with each level and get harder if playing on later levels. They all are very unique and you must tackle them in different ways, using powers that work best against each of their weaknesses. The first few will take little effort, but in the later stages, you will start to see an increase in their health and attacks. There are even achievements related to beating them on stage eight with specific ways of killing them! Difficult but a welcoming idea to achievements. 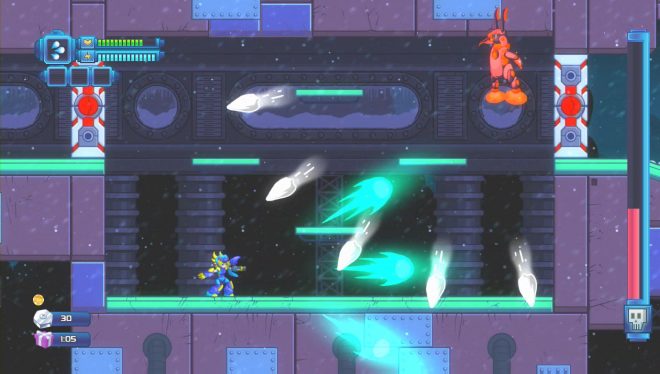 Roguelike gameplay — Yes, the heart and soul of the game. I just don’t think it was implemented well. It feels like you’re playing Mega Man Maker. Some levels are quick and easy, and you feel untouchable rushing through it. Then others get clunky with tons of platforms thrown in resulting in a claustrophobic environment. It’s as if someone uploaded their own version of the level to laugh as you fall and die. Also, there are times early on when you can’t jump to certain loot because you had to have RNG on your side and had obtained a double jump or hover ability. And, the overall changes with each playthrough don’t seem to add much fun. While the first handful of playthroughs can be enjoyable (even dying every time), the game starts to get exhausting. Even having a better character, there are certain levels you just won’t enjoy if you play them last. With so many fails, you still have experienced most of what the game has to offer. 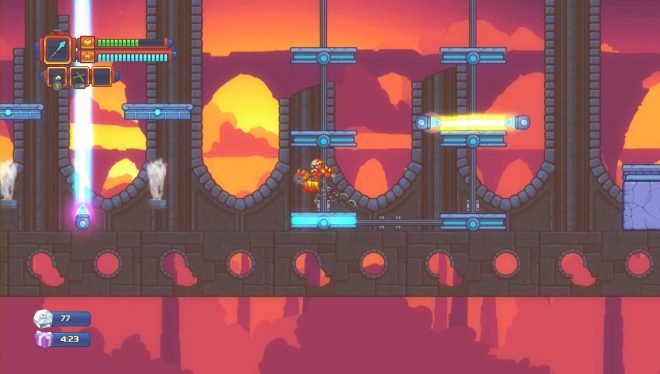 Abilities — As you defeat bosses, you have a choice to use their power. The powers are useless in most situations if you aren’t sure what to use them on. The game never really gives you any explanations and it is so fast paced that you never feel like really experimenting for fear of dying and starting over. The powers come in the form of an attack or shield. Your base attack can always take care of enemies with ease, and even hit bosses much harder. Certain bosses have a weakness to certain powers, but for the most part, only a couple powers make sense to use against them. One example of a power is a giant block that moves very slowly. With the game’s speed, it seems backwards in momentum. However, the machine gun and boomerang are very useful. Not only do they do good damage to bosses, but they can also get hard to reach enemies. The boomerang can be thrown in eight different directions, which makes it one of the most useful powers to have. Other than those, the other powers can seem boring and non-imaginative. 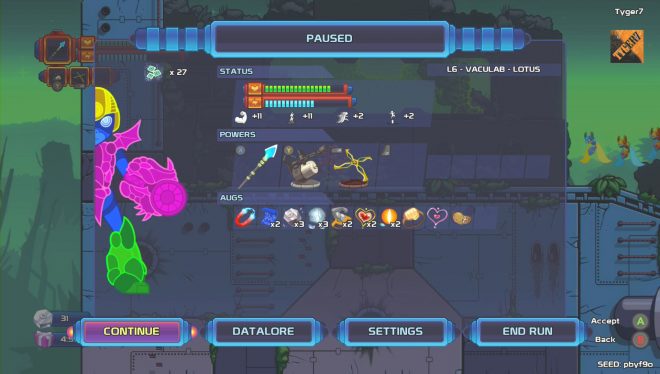 Those who enjoy both roguelike experiences and adore Mega Man-inspired games will be in heaven. Casual gamers, achievement hunters, and impatient players will be in hell. The vanilla game is already pretty difficult, and all of the extra options the game has only makes it more unforgiving. The daily and weekly challenges only apply to the hardcore, giving little to do for everyone else. Permadeath isn’t for everyone. Like a great musician once sang, “I try so hard, and got so far. But in the end, it doesn’t even matter”.

20XX was developed and published by Batterystapple Games on Xbox One. It was released July 11, 2018, for $17.99. A copy was provided by the publisher for review purposes.