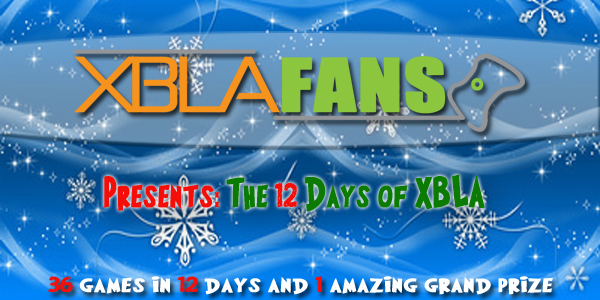 In order to enter the contest at the XBLAFans.com website, you will need to check back here each day between Dec. 12th and Dec. 23, and there will be a daily question that you will need to answer. Each contest will be a bit different in order to keep you all on your toes, but it won’t be anything that our readers can’t handle. We’re not splitting an atom here, we just want to give away some awesome games. Then, every day on Twitter, there will be a standard retweet contest that serves as an additional chance to win.

But that’s not all we have planned. As an additional incentive to make sure you come back here to XBLAFans.com and enter each daily contest on the website, we will be giving away a Grand Prize of all 12 games to one very lucky gamer!

Each daily contest will be posted at 12pm Pacific time and will run until 11am the next day. Daily contest winners will be announced in the proceeding day’s contest post, so make sure you check back each day to enter another contest, and see if you won the previous day’s contest while you’re at it. The Grand Prize winner will be announced on Dec. 24 at 4:00pm Pacific time. The daily Twitter contests will be posted anywhere between 1pm and 3pm Pacific time every day and will only last 6-9 hours at the most. So keep a close eye on your timelines!

Technical rules: you are only allowed ONE entry in each daily contest here on the website and in the Twitter contest. It’s the season of giving, so let’s be kind to one another and give each other a fair shot. For the site contest, be sure to have an actual email address attached to your account that you are commenting with. If you win, we will be emailing you first, and you will need to send a response before we send any prize you have won. But if you wish to make this an easier process on both of us, including your Twitter name with your comment would assure a much quicker delivery of your any game you do happen to win.

Is there any better way to cap off a great year of XBLA games than giving a ton of them out to you guys? Let me know if you find an answer for that ;)

Day 3 contest for Dec. 14th Winner: Wuvein (@Wuvein) – Prize: Trials Evolution (Donated code back to the prize pool since they already owned the game. There will be an extra Twitter contest for this prize on Saturday the 15th) – Replacement winner: @BizarroPete

Our Grand Prize Winner is: Shane (@FrogDawg) – Congratulations! You have won a copy of every XBLA game and add-on listed above! A prize worth $200! We will be in contact with you today on Twitter about claiming your prizes!