Swarm was developed by Hothead Games and published by Ignition Entertainment. It was released March 23, 2011 for 1200MSP. A copy of the game was provided by the publisher for review purposes.

Swarm is a 2.5D side scrolling platformer in which you control a group 50 small, blue, clueless creatures. The goal of the game is to collect DNA for the “Momma” of the alien swarmites throughout twelve levels while making sure at least one of said swarmites stays alive. The game is not about story; it is about points. Swarm proves to be a fun and engaging gameplay experience once you get used to a few minor drawbacks. 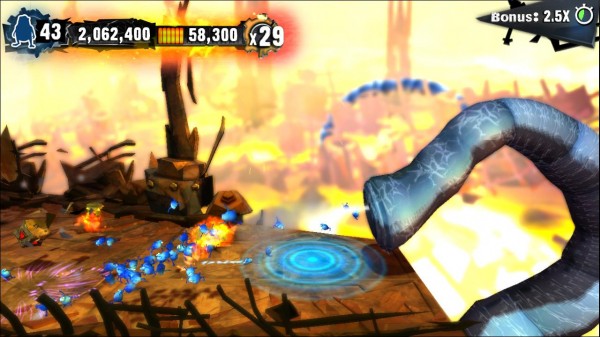 Being a swarm – Being able to control 50 characters at the same times is an impressive feat and fun to control. The swarm runs, jumps, dashes, and spreads about together in an exacting unison. When the swarm loses or gains members, the unit as a whole continues to function as if nothing happened.

Platforming – The game plays as a decent platformer; the way you have to maneuver through dangerous obstacles makes it feel like a fight for your swarm’s survival. Moving the swarm over treacherous terrain and flying past enemies is a thrill, and especially fun during the sections with tons of hazards. The game has some gimmicks, such as buttons that require a certain number of swarmites to continue and throwable objects. There are also collectible DNA strands in hard to reach places which are used to unlock the game’s bosses. The couple of bosses in the game are standard hit-the-weak-point affairs, but are good at mixing up the gameplay and offering a decent challenge.

Scoring – The game features an addictive scoring system, where collecting DNA gets you points and killing swarmites increases your multiplier. To keep your multiplier going, you have to collect more points or kill more swarmites. Once the multiplier’s timer runs out, the points are calculated into your total and you have to start again from scratch. The game always makes it possible to keep a streak going; points are scattered throughout and always close by. The challenge lies in keeping a multiplier going throughout a level, and finishing the level as quick as you can to get a high time bonus multiplier. High scores can become very competitive on the online friend and world leaderboards, and fans of the game will no doubt spend hours trying to beat their previous scores.

Death Animations – The game is very sadistic, as the swarmites can die in a number of violent ways. Whether they are sawed in half, blown up, or poisoned, the game offers some funny animations and even rewards your swarmites’ deaths with death medals. Even the main menu features death; pressing the “Y” button yields one of many gruesome fates for the on-screen swarmite. In a great twist on the old death chasms, every swarmite that falls off the play area is killed by flying arrows, saws, or spikes before leaving the screen. Although twisted, the amount of cartoon death in the game offers humor and becomes part of the game’s charm. 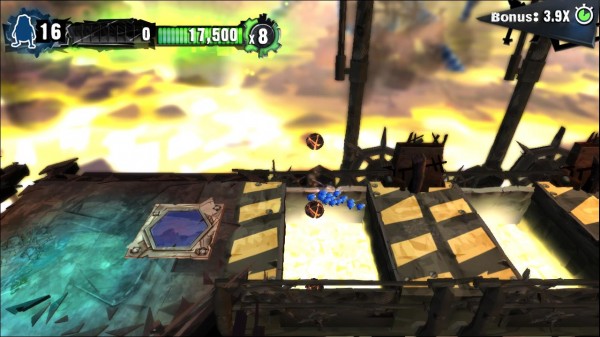 Difficulty spike – The game starts off with a couple simple tutorial levels, teaching you the ropes of the game. Then, the difficulty ramps up quickly, with levels with tough platforming, and/or high requirements for score. Some checkpoints are also too spread out, sometimes causing you to repeatedly play a long section. The suddenly high difficulty will cause some struggle, but thankfully all the challenges still feel doable.

Control Scheme – While the controls are tight gameplay-wise, the layout could have been thought out better. Half of the actions are linked to the left and right triggers, and having to press left then right in rapid succession to bash is not as effective as a one-button prompt, and can be tricky to get right all the time. There are two unused face buttons, which should have been used to give the triggers some time off. 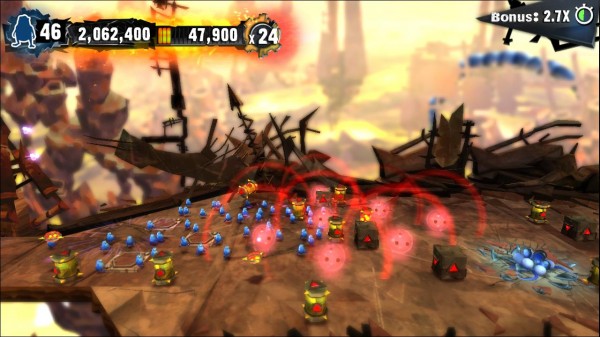 Swarm is a great game, making the idea of controlling a crowd- used in very few games, fun and fresh by centering it around charming blue creatures and their struggle for survival. The game has loads of replay value for those who play for high scores, and is a great platforming game everyone should try.