Leave it to the Achievement experts to track down all the requirements for Shank’s 11 unlockable costumes… one day after the game’s release on XBLA. A number of costumes were revealed leading up to the game’s release, but thanks to fans over at xbox360achievements (and some Tweets from our friends at Klei Entertainment), we have a complete guide to help you obtain all eleven Shank-tastic outfits.

Changing your costume affects not just your character onscreen, but the close-up of Shank’s head in the corner by your health meter. And the costumes are great! Scroll down for details of how to unlock each one. 1. The Original Shank
This one’s easy. Just buy the game and you’ll have Shank in all his original glory.

3. Wildman Shank
It’s called “wildman,” but there’s a striking resemblance to Wolverine. Alas, you’ll have to complete the game on hard to unlock those hairy arms. (Also unlocks the “Just That Hard” Achievement.)

6. White Pajamas Shank
Everyone knows that red ninjas are more badass than white ninjas. That’s why you only need to pull off a 100-hit combo to unlock the white pjs.

7. Horror Shank
A.K.A. Grindhouse Shank, the name of the costume may be an ode to the Rodriguez/Tarantino film, but the look is 100% Jason Voorhees from Friday the 13th. Appropriately, this look unlocks with 100 chainsaw kills. (Also unlocks the “Grindhouse” Achievement.)

8. ANY-S Shank
We love Robo-Shank. Even more, we love what you have to do to unlock him! Beat the game on any difficulty, then start a new game and enter the Konami Code. In case there are any gamers in the entire world that don’t know what that is… try: Up Up Down Down Left Right Left Right B A

9. Dance Shank
Dance Shank has a kickin’ afro. We like to think this is a nod to an incredible 70s icon… Who’s the cat that won’t cop out when there’s danger all about? SHANK! Just complete the game on normal and this sweet ‘do is all yours. (Also unlocks the “And It Continues” Achievement.)

10. DeathSpank Shank
Share the indie game love! Like ANY-S Shank, you can unlock this sweet DeathSpank Shank by completing the game on any difficulty, then entering the code: Up X Down B Left Y Right A

11. Shank the Gimp
The final costume puts this adorable bear head on tough guy Shank. All you have to do is complete 500 kills. 500 CREATURE kills. 500… rats. Or bats. Thankfully, not cats. 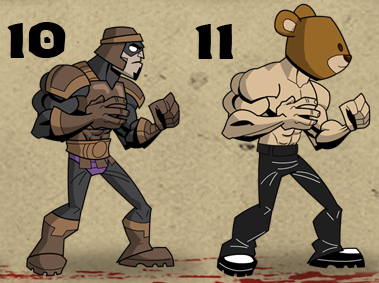