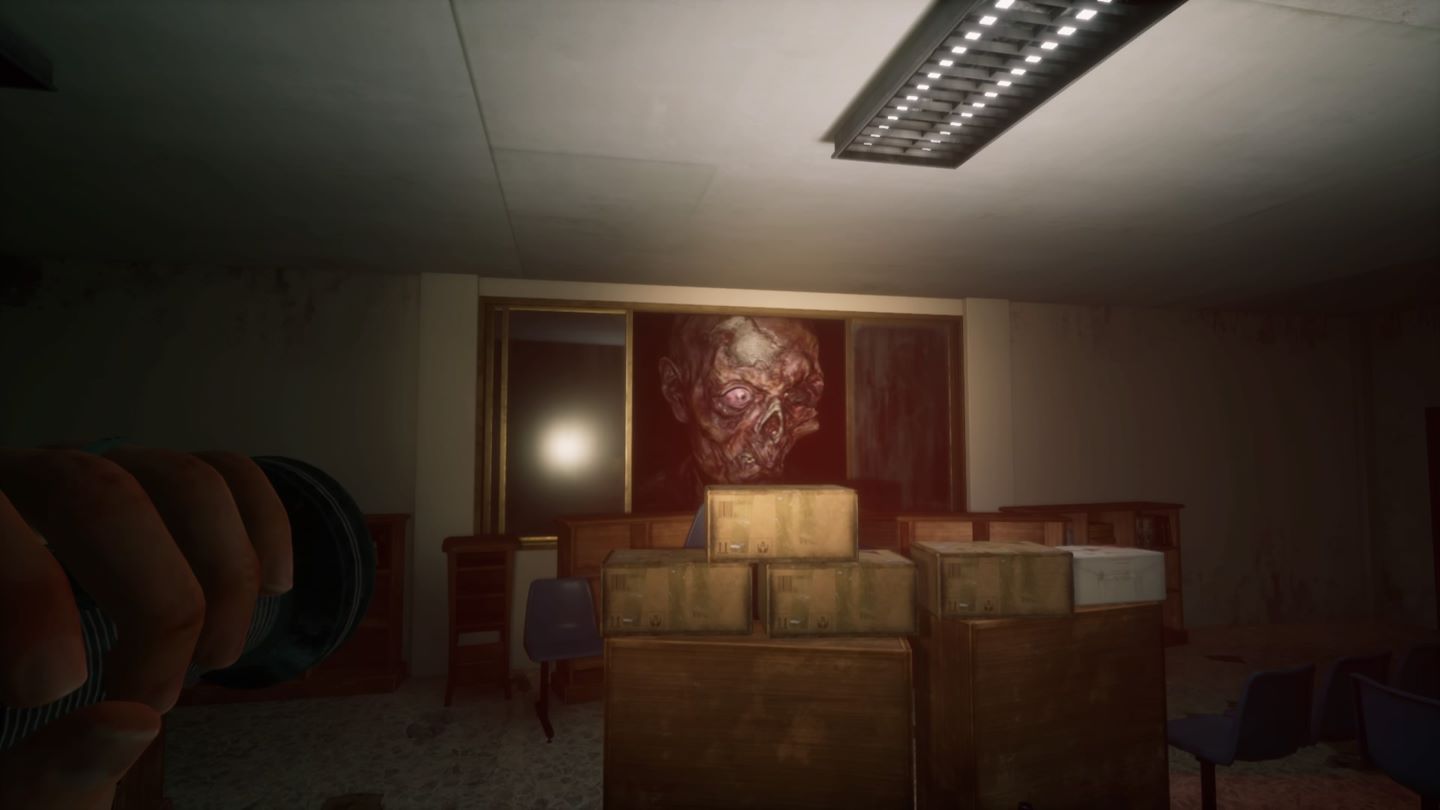 What makes horror scary? Could it be the unexplainable sounds of terror coming from all directions? Perhaps its the horrifying visual appearance of the people or monstrosities that give chase to the player. Just think about the idea of closing your eyes and putting your hand in front of your face during the thrilling part of a horror movie. Suddenly a jump scare occurs, but even though you didn’t see it, the sudden sound of a shriek causes you to jump anyway. Now imagine staring at a picture of your biggest fear. It’s a picture, so, therefore, it makes no sound. The very sight of the image still sends chills down your spine. What makes good horror scary is not just sound or just sight; it’s a combination of the two being used in tandem. Home Sweet Home is a horror game based on real-life Thai Mythology that does well at manipulating both visual and audio but falters in the overall design of the game.

After the disappearance of his wife, the protagonist Tim finds himself awakening in a condemned building. With no clue of how he got here, Tim looks for a way out. Unforeseen consequences occur, bringing Tim to also seek out clues to his wife’s disappearance from this strange place as well, all while being stalked by spirits hell-bent on killing him. Tim must complete various tasks and puzzles while avoiding evil spirits in a variety of different locations. Defenseless, he must sneak around all while hiding in lockers if he’s spotted. Unravel the mystery behind Lucy’s disappearance and help Tim break free of this nightmare and escape back to reality. 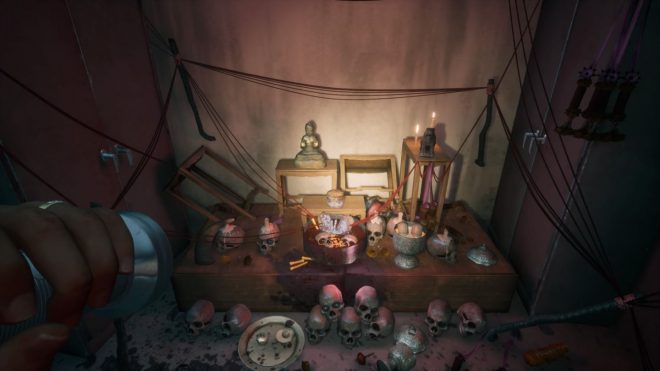 Fearful Atmosphere – What should really come as no surprise in a horror game is the atmosphere. The various areas the player is required to navigate through leaving your blood pumping and heart beating sporadically, as you never know what may pop up in front (or behind) you. Even in normal locations of the game such as the protagonist’s house, the quietness gives you a reason to keep your guard up for anything. Doing something upstairs only to hear a ball suddenly bouncing, or hearing something happen on the floor beneath you are a constant reminder that you are playing a Horror game, and continues to keep the player on edge.

Puzzles aren’t overwhelming – The biggest issue with a lot of horror-style action adventure games is that not only do they add a large number of puzzles into the game. They also make the puzzles overly complex to the point that it ends up causing the player to become stuck in a certain area of the game for longer than they should need to be. These issues can start to cause major disconnects in not only the story, but also the horror aspect entirely. Home Sweet Home thankfully has only a few puzzles included in the game. The answers for most of these puzzles are hidden in plain sight, or nearby. They don’t require the player to overthink the answer. Most answers are simple logic, observation, and basic math. If you have those traits, then you should have no issues. 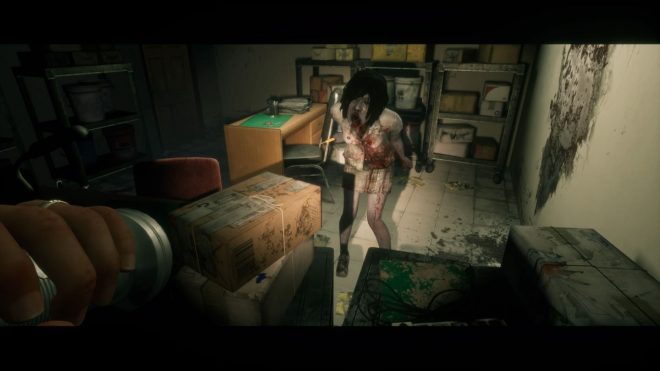 Broken AI – There are a variety of different enemies that will be hunting you throughout the game, but the spirit woman wielding a box cutter is the one you’re forced to deal with the most. The first time you see this woman you’re terrified as she comes crawling out of a blood splatter on the wall. It’s great. But as the game goes along, and you’re required to maneuver around this enemy, the fear of running into her fades, and this mainly due to the fact of how broken her programming is. A few instances when encountered she’d either be standing in place, which allowed her to be walked through as if she wasn’t even there. Other times she’d be walking into a wall which made challenging areas very easy.

No Real Ending – It’s totally fine for a game to leave itself open for a sequel. It’s not alright to do this without any real ending, or while leaving many different aspects of the game unexplained. For a majority of the game, Tim will constantly see and chase after his wife, Lucy. Lucy will, however, run away from Tim and tell him to stay away from her. It’s never explained why she is doing this. The player does get insight into why the evil spirit is evil in the first place but never explains why she is hunting the protagonist. Players are simply met with a “To be continued in Episode Two” screen and given the option to return to the main menu. Nowhere is it ever mentioned that this is an episodic title which is quite deceiving. The entire ending is anticlimactic and disappointing.

Buggy Finale – The final areas of the game are quite simply the worst of the game. The boss fight near the end is a broken mess as the spirit constantly teleports in the middle of chasing you down. This results in many unfair deaths. The very last scene the game has to offer is a walking sim with a few eerie type things happening. This section already feels longer than it should feel, considering the character you are playing can only walk through a dark house while holding a candle and a knife. This ending area is so buggy that when you reach a specific point, a small cutscene is supposed to trigger. If it doesn’t, your character is stuck walking around an enclosed room endlessly. If this happens, you’re forced to return to the main menu and continue the game, which will bring you back to the very beginning of this scene to do it all again. Now imagine having to do this three times before the game finally decides to cue this cutscene and allow the end screen to appear.

Random QTEs – One of the bigger struggles with the game comes from when you find yourself cornered and you know you face certain death against the spirit. Sometimes if the spirit catches you, your character will be immediately killed. There are other times when a quick time event will ensue, forcing you to tap A to escape the spirits clutches. If you manage to escape the scuffle, your character will still be hurt and unable to run for a period until he heals. The inability to run makes this entire concept pointless already because the spirit will chase after you, and immediately catch you again. The entire quick time event concept is random. It can happen when running towards the spirit, trying to run around her, or even when she comes from behind. This makes the immediate deaths also randomized. The whole system is just questionable and flawed. 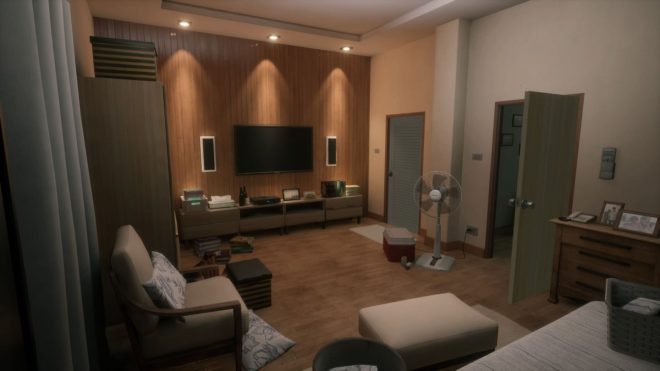 Home Sweet Home is a game that lacks the direction and polish that it needed. The various locations that the game has to offer really bring on the horror feeling, but once the broken AI rears its ugly head, it just takes the horror appeal away completely. The player is haunted by an evil spirit for a large part of the game while he gives chases his wife, but why any of this is happening is never explained which makes the entire game feel pointless. The nonsensical “to be continued” ending you’re met with after about four and a half hours of gameplay really begs the question on why you’d even consider the second episode of the game. Home Sweet Home has many rough spots. The bugs and level issues can easily be a deal breaker. It really comes down to whether or not you’d be able to look past a large number of issues to experience the game.

Home Sweet Home was developed by Yggdrazil Group and published by Mastiff LLC. The game released on October 16th, 2018 for $19.99. A copy was provided for review purposes. 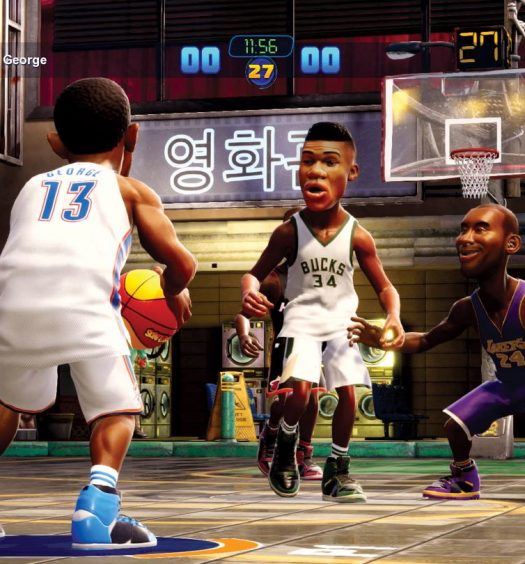