Aqua: Naval Warfare was developed by Games Distillery and published by Microsoft Game Studios for XBLA on May 19, 2010. Retails for 800 Microsoft Points. A download code of the game was given to us by the publisher for reviewing purposes. 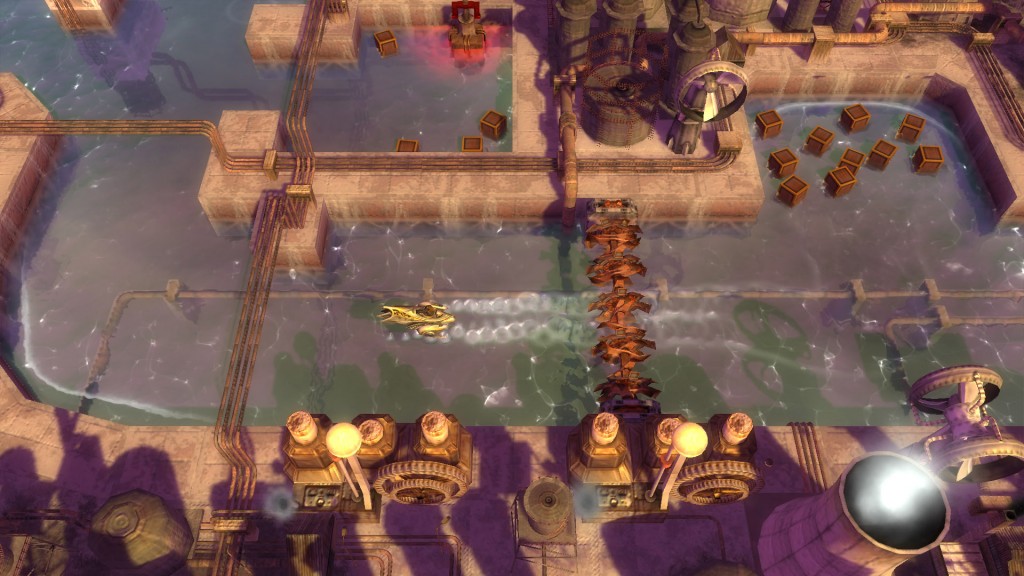 With the advent of Geometry Wars on the XBLA, the standard was set high for all dual-stick shooters that would follow. Aqua: Naval Warfare takes what worked well with GW, namely the dual-stick controls and frantic enemy swarms, and applies it to a game that reminds me of Cobra Triangle for the NES. The result is an admirable action game with a neat visual style and tons of potential, but one that will probably be forgotten as soon as it’s finished.

Cool visual style – Aqua’s visual style is interesting, especially the cut scenes. The hand-drawn characters and graphic novel-style of art give the game a unique feel. The boat designs and in-game architecture also have a Waterworld­-ish feel to them.

Water effects – Today, a game’s graphical prowess is often determined by how good its water physics are. While Aqua may not have the dynamic wave and water physics of some games, the effects are still really nice looking, especially during rainstorms. Perhaps a sequel could make an interesting use out of some dynamic water effects, but for now, it’s just simply nice to look at.

Game length – Most XBLA titles are short and can often be finished in a day’s worth of playing. The length of Aqua’s campaign feels appropriate for the price, and doesn’t overstay its welcome. There are a number of hidden items that can be found throughout the campaign for perfectionists, too. The local multiplayer is pretty minimal, but can extend the game’s replay value for fans who really enjoy it.

Escort missions – It seems that escort missions are universally hated by gamers, so any game that starts off with an escort mission is bound to put a bad taste in the player’s mouth. Aqua unfortunately features a number of escort missions, which tested my patience on more than one occasion. Playing on an easier difficulty certainly makes these missions more manageable, but doesn’t really do anything for the fun factor either.

Technical issues – Aqua has some pretty nasty screen tearing and frame rate issues. I even experienced flickering water and building textures on a few occasions, which when you’re playing a game called Aqua it means the whole screen is flickering and tearing. At one point these problems became so severe that the game locked up on me and I had to restart my Xbox.

Disappointing story – For a game with such a unique visual style during its cut scenes, it’s a shame that the story is barely given any context. The characters aren’t explored well enough for them to be understood or even liked. I never felt any kind of connection to them, and I never understood the reasoning behind the conflict between the Gotheans (the bad guys) and the Empereans. The voice acting can also be quite hit-or-miss throughout the campaign, too.

Aqua is a game that does a lot of things well, but not well enough to be remembered or to forget its shortcomings. It is a great game to look at in pictures, but numerous technical problems mar the experience when it is in motion. The visual style of the cut scenes is nice, but the story fails to pull it all together. The controls are borrowed from similar games, but the gameplay doesn’t feel exciting or challenging enough to be on the same level as a Geometry Wars game.

If I sound overly negative, I don’t mean to be. I had a good time with Aqua while it lasted, and I felt satisfied with my experience when the game was finished. But nothing about the game impacted me enough for me to want to come back or remember it afterward. It’s the type of game that you will know immediately if you like it or not, so simply trying it is the best recommendation I can give.