Zombie Driver was developed and published by EXOR Studios. It was released June 24, 2014 on Xbox One for $14.99. A copy was provided for review purposes.

Zombies, zombies and more zombies have taken over the games industry; the idea of a zombie apocalypse seems to be quite infectious. Zombie Driver Ultimate Edition feeds on that infectious love of the flesh-consuming creatures and provides a unique zombie experience. Mowing down hordes of zombies using different vehicles, weapons and driving skills is an amazingly solid concept for a game.

Zombie Driver UE is the third iteration of this particular title. Zombie Driver was released for the PC in 2009 and Zombie Driver HD was later released for Xbox 360. The Ultimate Edition includes all of the DLC that was ever released for the other platforms, contains nearly double the zombies per horde and has updated the graphics with a 1080p 60 frames-per-second overhaul. The Xbox 360 version was taken off the marketplace due to the liquidation of its original publisher, despite selling half a million copies. So how does this latest version fare? 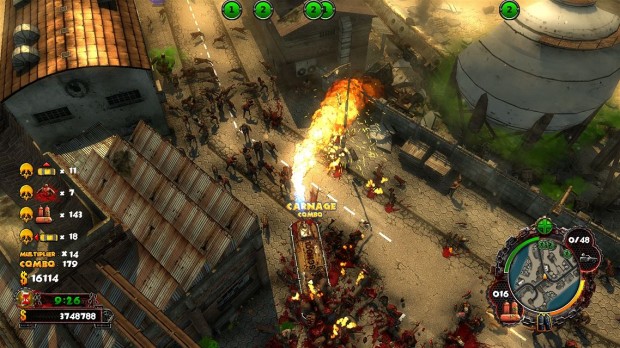 Pick up and play – There is certainly something to be said for simplicity in game design. It allows for ease of access. Zombie Driver isn’t meant to be a trial of finger dexterity, nor a game of deep strategic thought. It is a game that suits its title perfectly: you drive around running over zombies, using the occasional weapon. It provides enjoyment for a player of any skill level, which is an accomplishment in itself. Missions are not complicated and generally consist of picking up civilians after clearing out a horde of zombies.

Easy on the eyes – Ultimate Edition looks great and does run at an amazing 60 fps for the most part. The blood trails from the vehicle tracks seem to just grow and grow, never dissipating like they did in previous versions. The effect is a screen filled with bloody tracks, zombie bodies and entrails that continually pile up as you move through an area.

Bloody fun – The top-down perspective in a driving game may seem like an odd choice, but it’s the right one. The game is reminiscent of the first two Grand Theft Auto games — if civilians were zombies and the objective was to run over as many as possible. Blood is everywhere, as are corpses and zombies, and with all the action going on it’s easy to get caught up just running over zombies and forgetting about mission objectives. The Slaughter game type offers exactly this experience, running over wave after wave of increasingly powerful zombies grants new weapons and upgrades to survive longer. This was the game type that delivered the most fun overall. 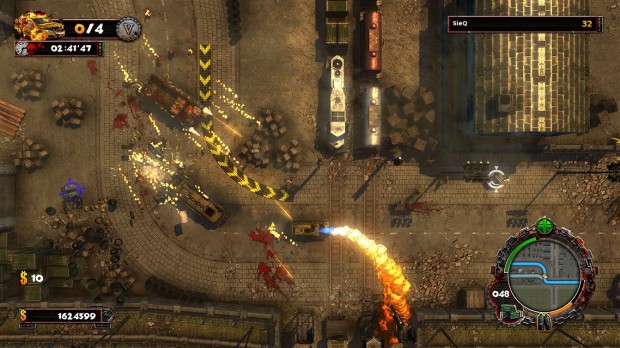 Cure for the race – The “Blood Race” mode is the least appealing of the three available game types. Unfortunately, it delivers a sort of rushed-through race with very few track boundaries. Races feel more like a short run through the environment with some AI vehicles loosely following. There are plenty of things that could have been improved from AI pathing to the addition of checkpoints. The result is a mode that feels as though it was quickly thrown together.

Braaaains – AI in Zombie Driver is lacking in multiple aspects, and the problem is exacerbated by this being a racing game. During the campaign mode it’s noticeable that the zombies are entirely brainless and gravitate to your vehicle based on distance. The bosses aren’t much better and for the most part remain stationary. This aspect of the game is multiplied in the Slaughter where the levels are extremely small, and redundancies can be seen on the screen. The Ultimate Edition has more than doubled the amount of zombies on screen, but they still behave in the exact same manor. Unfortunately there is still no multiplayer option, which would have been a nice break from the AI’s lack of ability. 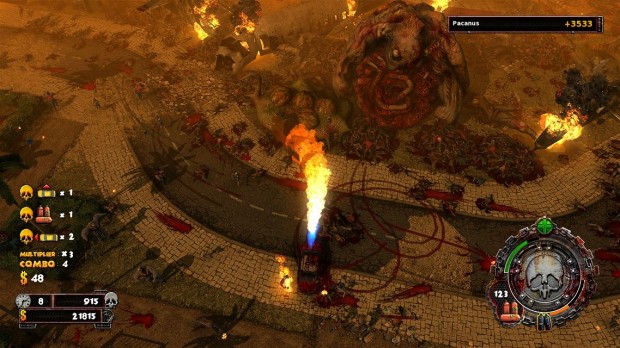 Zombie Humor – The game seems to acknowledge its humor in everything but the story. The campaign feels as though it wants to be serious, so there is very little humor in the briefings, yet the game screams zombie humor from top to bottom. Ridiculous amounts of blood, ludicrous vehicles, absurd weapons and yet the campaign briefs are dry and feel as though they belong in a military strategy game rather than in Zombie Driver. The developers are welcome to interpret their game in any way they like, but XBLA Fans honestly expected more laughs out of the campaign dialogue. 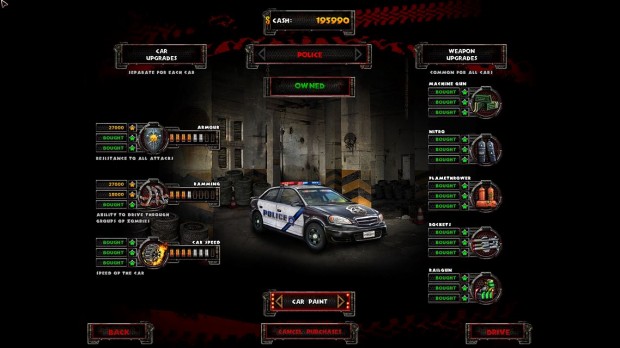 Zombie Driver ultimate Edition is undoubtedly fun and delivers a great simple experience that allows anyone to easily pick it up and feel relatively capable. Owners of the previous games excluded, this latest version contains great value at the $14.99 price point. But there simply isn’t enough new content to justify owning another copy unless you are just a fan of the franchise. Beyond a few minor hangups with the AI and story, Zombie Driver: Ultimate Edition is exceptionally fun. This is the type of title that will allow gamers to pass the controller around, vying for high scores or besting one another’s zombie kill counts.