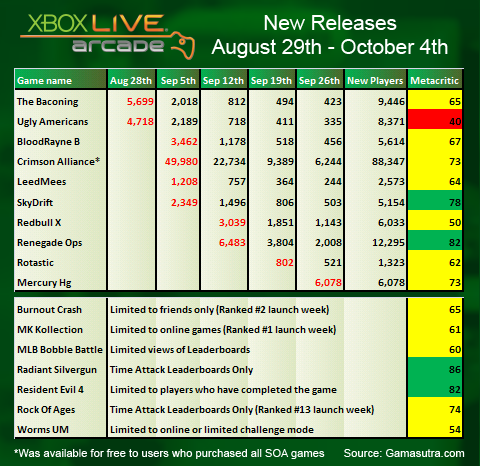 September brings some interesting new releases, and with them sales data from the folks at Gamasutra. The data lists two late August releases and the eight September releases we saw. Some sales weren’t surprising: we knew Crimson Alliance would do well being bundled for those who purchased all five Summer of Arcade games, and it’s a great game in its own right, which might account for sales close to 90k. What blows us away, though is that SkyDrift didn’t have a strong launch.

We’re not sure why, it’s an incredibly sold game. It’s interesting, though to look Gamasutra’s Ryan Langley looked back on. For example, Monday Night Combat, part of last year’s Summer of Arcade, has now crossed the 300k mark in sales. Ghostbusters: Sanctum of Slime, a terrible game, has over 30k while the more solid Bionic Commando Rearmed 2 hasn’t even broke 10k. This year’s Summer of Arcade did fairly well, with four of the five games hitting over 100k in sales. Only Insanely Twisted Shadow Planet didn’t hit that mark, reaching just half way. We suppose that no matter how good or bad a game is it comes down to visual interest and so many other things that critics can’t rate.