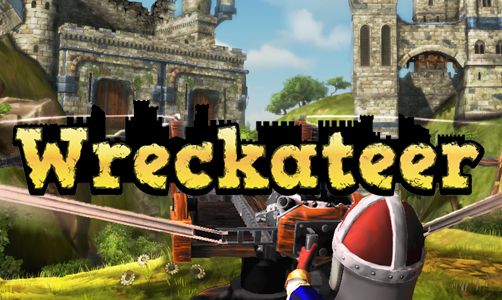 Continuing our look back at Summer of Arcade 2012, today’s roundtable discussion focuses on Iron Galaxy’s Wreckateer. The cheapest of this years line-up at 800 MSP and the only Kinect title, it also ended up being one of the better reviewed games. As you’ll see our staffs discussion reflects that.

Christine Mitchell: I was surprised at how long it was, usually these Kinect things feel like mini games but this was pretty good value.

Shawn Saris: Yeah, that is true, it is actually quite long, and hard!

Nathan Bowring: Wreckateer may be the best Kinect game ever, at least control-wise. I usually play Kinect using the “good” setting, which usually is bad for most games, but Wreckateer still controlled amazingly.

Kyle Aufderheide: It’s definitely one of the better responding Kinect games Never had problems with movement or placement other than my own wrong doing

Shawn Saris: I had a few issues with the flying shots, but that is likely the angle of my Kinect and small room

Christine Mitchell: I had a few issues with the bombs not going off when I wanted.

Shawn Saris: Yeah when you have to throw your arms out?

Christine Mitchell: Yeah, the arms thing. Nothing serious though as you had those “mulligans” if it didn’t work.

Kyle Aufderheide: Throwing up of the arms is probably the worst part. It’s tiring too! I was soar the next day.

Shawn Saris: Oh for sure, it tires you out after like an hour of waving your arms. I would say for the 800 price point it has got to be one of the best kinect games out there.

Nathan Bowring: I found flying worst than throwing up your arms. Maybe I was just bad at it.

Christine Mitchell: It’s quite competitive too. I kept seeing Nick’s score was so much better than mine and had to keep replaying levels to catch up!

Shawn Saris: I love the shot breakdown so you can see how each of your shots compared to other peoples.

Kyle Aufderheide: The leaderboards were implemented quite well. I was always trying to beat Nick and the graph at the end was a terrific idea. How’s the difficulty curve towards the end? Only completed up to all of Chapter 3, need to go back.

Shawn Saris: I am trying, I am a busy man! And for a Kinect title it’s very impressive. I think it is a great buy if you have a Kinect. Even against the other SoA titles, I wouldn’t want to pass this one up

Nathan Bowring: For a SoA game it was pretty good. It’s hard to compare it to other SoA games since it’s the only one for Kinect, but compared to other Kinect games it’s one of the best.

Nathan Bowring: Me too.

Check back tomorrow for our Deadlight discussion. In the meantime let us know what you thought about Wreckateer in the comments, best arcade Kinect game? Where do you think it falls among this years Summer of Arcade line-up?