Xbox One has a strange lack of traditional shoot-em-ups like the Raiden series or Ikaruga. To punctuate that, quite a few arena-based shooters similar to the Geometry Wars series have showed up on the marketplace lately.

Teslapunk offers the Xbox One fanbase one of its first opportunities to try a vertical scrolling shoot-em-up. The story revolves around an invasion by Martian Emperor Zangórax, who is an invader by day and a popular DJ by night. Right. Thankfully, gameplay is what matters in a shmup, and I’m happy to note Teslapunk‘s is good. 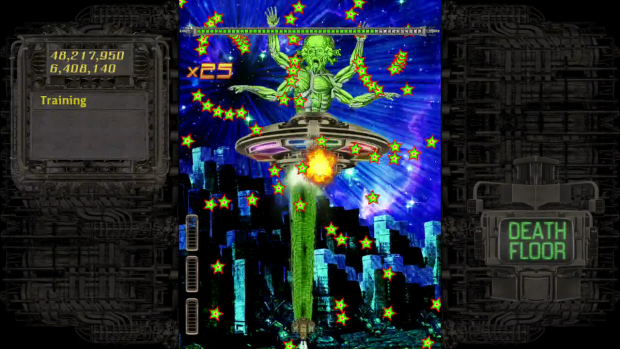 Solid gameplay — My first impressions were pleasant. Teslapunk sets out to be more than a generic shoot-em-up and succeeds. Bullet-canceling bombs that are useful for obtaining high scores are a welcome addition to the gameplay. Having enemies drop collectibles that recharge bombs bolsters the effectiveness of the scoring system. In addition, two bombs can be used as a protective shield to save a life from being lost. I would have preferred if this was optional, as moments have occurred where I needed bombs, but didn’t have them available from auto-usage. Nevertheless, as a bullethell shmup, Teslapunk succeeds in offering an authentic experience.

Survival mode — I expected this to be a modified form of Arcade mode. It’s definitely not; Survival mode functions as a shmup form of an endless runner. Players start with a ship with a large hitbox and a weak attack. As coins are collected, upgrades or a new ship can be purchased to help improve life expectancy. It can prove to be somewhat addictive as players get the itch to play one more round to get just enough coins to buy the next upgrade in hopes they can get further than their highest distance. It eventually boils down to player skill as the mini-bosses start shooting out bullet patterns that get faster and tougher to get past. Survival mode is a great addition for when the main game starts to become tiring. 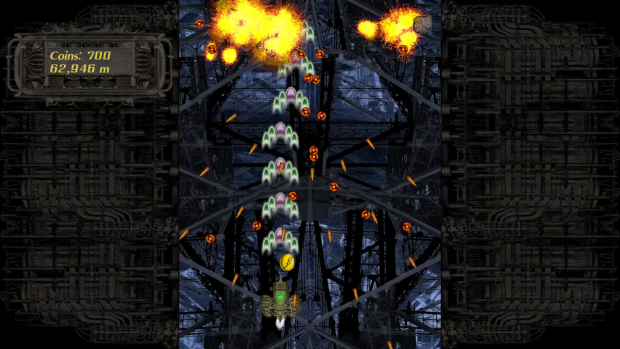 Aesthetics — Opinions are likely to be divided on the game’s art direction, but the general consensus will be that KlutzGames’ design choice is not ideal. In particular, I found issue in the bullet color in relation to the game’s backgrounds. The orange-brown-like bullets aren’t sharp enough to distinguish from the equally dull colors of the game background, which at times causes bullets to seemingly they disappear from your peripheral vision or blend in with the background. Even the excessive strobe effects can’t redeem Teslapunk from feeling lifeless. The art lacks any radiance to it, which makes the game unnaturally harder and sadly less memorable.

Continue system — All I could do was shake my head in disbelief in reaction to Teslapunk‘s archaic continue system. If a player loses all of his or her lives in most modern shmups, they are allowed to continue right where they died out until all continues are gone. That design choice is highly beneficial for numerous reasons. Players who may be having an off-day or lack the skill to beat a level will be allowed to have the full experience at the cost of usually losing their score for the run. Ideally, credit feeding also allows for practice in a specific level to get the techniques down to finally conquer it. Usually, a True Last Boss or level is gated off to everyone except the most skilled players so that there is something to strive for that credit feeding wouldn’t accomplish. In Teslapunk, a player who died will restart at the beginning of the level he or she died on. (Good luck practicing on a boss on harder difficulties if you take damage during the level itself.) If experience is the best teacher, it’s on paid vacation here. 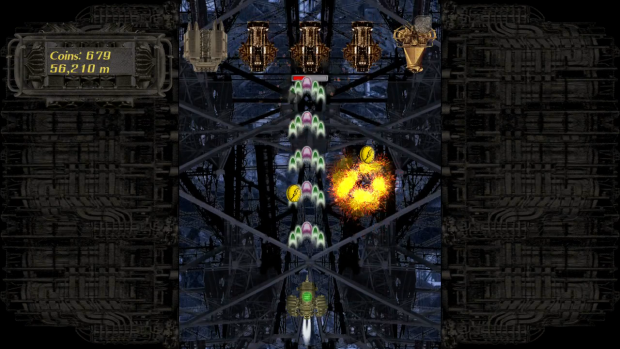 Teslapunk is an almost-great bullethell shmup and a good addition to an ID@Xbox library currently swarmed with arena-based shoot-em-ups. Marred with two glaring issues and coming from a genre that is usually niche, it’s a difficult game to recommend to a wide audience. Fans of the bullethell genre may want to give this one a try. Everyone else should be skeptical. In a rare twist, though, Teslapunk actually has a trial available on Xbox One, so feel free to give it a shot.

Achievement notes: A one-point Gamerscore Achievement conveniently named OCD Trigger is obtained by merely starting the Arcade mode. The other four points to even out the score are obtained by beating Arcade mode. Overall, the Survival-based Achievements should not be too difficult, except maybe the distance of 120,000 km. Mission mode is based on tasks done in Arcade mode, so anything related to the missions or the harder difficulties of Teslapunk will cause problems for most people. Rather tame for bullethell standards, Teslapunk still isn’t easily completed.

Teslapunk was developed and published by KlutzGames. It was released on October 7, 2015 for $9.99. A copy was provided by KlutzGames for review purposes.