See the new Hulk table for Pinball FX 2 in action

If you’re a fan of comic books or pinball, then you probably already know about the huge success that Zen Studios and Marvel have had together. In their upcoming DLC table pack, Avengers Chronicles, we finally get a table dedicated to the Jade Giant himself, Hulk. Although this isn’t just any iteration of Hulk, this is World War Hulk. In this story line Hulk has just gotten back to earth from an involuntary trip to space and he is mad and out for revenge. Stopping at nothing, Hulk took on heroes and villains alike to achieve the justice he felt was owed. In this new trailer we get a chance to see that Zen Studios will be holding nothing back, as they deliver this hectic adventure as only their digital pinball table can. And just in case that wasn’t enough, you can always take a closer look at the new World War Hulk table via screenshots we have just after the break.

END_OF_DOCUMENT_TOKEN_TO_BE_REPLACED 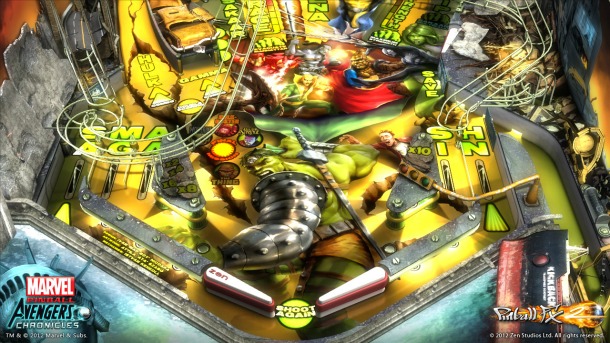 Take a peek at the Hulk table in Pinball FX 2

What was once to be rumored but now looks all but confirmed that we’ll be getting green and incredible soon. During Game Informer‘s April cover reveal, we were treated …
END_OF_DOCUMENT_TOKEN_TO_BE_REPLACED

Earlier today, we received an email from none other than Mel Kirk, VP of Marketing and Public Relations over at Zen Studios. Thanks to Mel, we have learned a …
END_OF_DOCUMENT_TOKEN_TO_BE_REPLACED

In a recent thread on the Zen Studios forums, administrator crackervizzo (aka Mel Kirk, VP of Marketing and Public Relations at Zen Studios) revealed that Hulk would be making …
END_OF_DOCUMENT_TOKEN_TO_BE_REPLACED