More Costume Quest – Let’s get something out of the way, we absolutely love Costume Quest. That said, going into Grubbins on Ice, our expectations were pretty high. One of the best parts of Grubbins on Ice is that it’s simply more of what makes the first game great. There’s new costumes, and therefore new abilities for our heroes. There’s new enemy types, new environments, new characters, the whole shebang. Most downloadable content doesn’t reinvent the wheel and given that Costume Quest is so great to begin with, there isn’t a whole lot of changes that Grubbins on Ice needed to make. The basic formula stays the same, and that’s only a good thing. 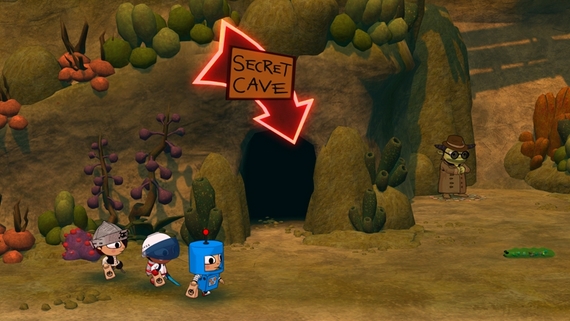 More great writing – One of Costume Quest‘s greatest strengths is in its writing. It gives our cast great personalities, chemistry and emotion. Oh, and it’s one of the funniest games you’ll ever play. Grubbins on Ice once again succeeds in this category. As we mentioned in our review of Costume Quest, there’s just something special about playing as a child. There’s a level of light-heartedness and magic about it, and Double Fine enhances it through writing and the game’s scenarios. There aren’t a whole lot of games that literally make us laugh out loud, but Costume Quest and its Grubbins on Ice add on are definitely on that list.

Room for future adventure – Before reading on, you have been warned, slight spoilers are ahead. Fans of Costume Quest get one big reason to smile at the end of Grubbins on Ice. While Costume Quest ended in a manner that really wrapped things up, Grubbins on Ice leaves plenty of room for the future of the franchise. It has been almost a full year since Grubbins on Ice launched, but the sheer fact that there is room for more adventure in this dazzling universe should leave fans excited.

Quasi-unified theme – Given the title, Grubbins on Ice, and the fact that it’s release coincided in with the beginning of winter, you go into the add on expecting the game to be a winter tie in. After all, the original Costume Quest was based completely around Halloween. From the gameplay, to the events, to the characters, Costume Quest is all about Halloween. For some strange reason however, only half of Grubbins on Ice takes place in the snow and cold. The first half of the game takes place in a desert like canyon. It’s not that the desert section of the game is bad (it’s good), it’s just not what we expected. 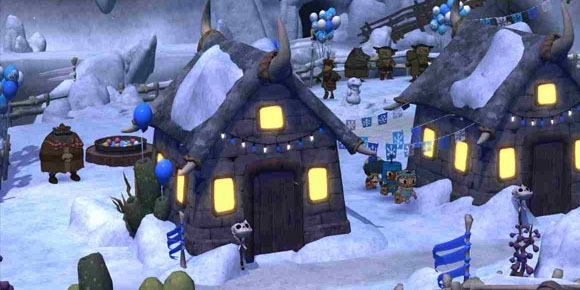 The monsters are holding a winter festival which involves a yeti coming out of his cave and there’s a power struggle going on between the various races of Repugia. That’s all fine and dandy, the problem is that it’s not enough and it’s too much at the same time. Costume Quest completely realized the concept of Halloween, and it did it amazingly well. When players think of Halloween, they’re going to think of Costume Quest for the rest of their lives. Grubbins on Ice however feels like it kind of missed its target. There’s so much that goes along with winter that isn’t really present here. The minds at Double Fine are some of the most creative in the industry. It feels like they were either extremely rushed with Grubbins on Ice and didn’t have time to fully flesh out the wintery concept, or couldn’t decide if they wanted to go with a summer theme, a winter theme, or down the monster civil war path, so they ended up combining all of them, and not really excelling at any of them. After Costume Quest nailed the Halloween vibe so well, it’s a bit disappointing that
Grubbins on Ice doesn’t really utilize the magic of winter, summer, or revolution, it combines them. Again, it’s not that the content of Grubbins on Ice is bad, to the contrary it’s good. We just can’t help but feel that there’s a lot of missed opportunity here.

Length relative to ideas – The length problem that Grubbins on Ice has isn’t related to its actual length. It should take you two to three hours to finish, which is about right for its 400 Microsoft Point price tag. The problem goes back to all the themes being jammed into the package. Winter, revolution in Repugia, and a desert theme are all crammed into this adventure and that’s what hurts. There’s enough ideas here for three downloadable episodes, but they’re all crammed into one. The result is that none of the three really feel like fully explored ideas. From a gameplay standpoint, Grubbins on Ice contains the right amount of action and content, it’s just the core concepts that feel stretched too thin. 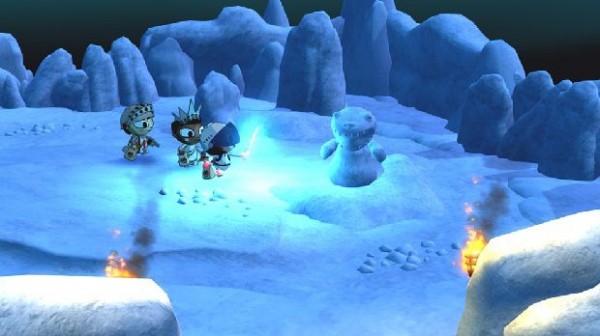 Despite conceptual shortcomings, Grubbins on Ice is exactly what it should be; More Costume Quest. If you loved the base game, then there’s no reason to hold back. Grubbins on Ice brings back lovable characters, sets them on a new adventure, and gives us more of the simple yet satisfying formula that worked so well the first time around. While Grubbins on Ice may not surpass the full length adventure of Costume Quest it may be that the bar was just set too high. Grubbins on Ice is well worth your hard earn Microsoft Points, it just doesn’t quite live up to its extremely high quality name. Upon completion, you’ll be left wanting more of this magical franchise, and we can only hope that Double Fine gives it to us in the form of a full fledged sequel in the future.