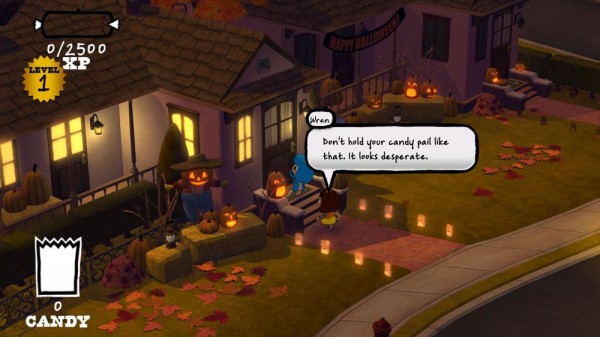 Gorgeous art style – Take a good look at a few screenshots of Costume Quest and you’ll find a gorgeous art style popping off the screen at you. Double Fine has a knack for creating characters and worlds filled with personality. They’re like the Pixar of the gaming industry. Conveying the emotions of these characters is obviously something Double Fine aimed to do, and they nailed it. Seeing fear or joy in the eyes of these characters makes them easy to connect with and helps put you in the shoes of children on Halloween. While many developers rely purely on dialogue to convey emotion, Double Fine does it visually. Just looking at the game gives players a sense of enjoyment, something that many games lack these days. The world of Costume Quest is filled with charm, detail and color which all begins with the game’s gorgeous art style.

Engaging combat – When it comes to turn-based combat, people usually fall into one of two camps: love or hate. We can say with confidence that Costume Quest‘s turn-based combat should please players of both opinions. Double Fine took steps to ensure that the action keeps flowing in Costume Quest while still maintaining the level of strategy expected in turn-based games. As players collect various costumes, you can change between them on the fly. Each costume has its own unique abilities ranging from attacks, defenses and heals. Additionally, you get to customize each character’s play style using “battle stamps” that can grant abilities like counter-attacks and stuns or give simple stat boosts. On top of the variety in costumes, abilities and play styles, players are tasked with carefully timing button presses during combat each and every turn. Nailing these button presses makes your current attack a critical strike, or reduces the incoming damage if its the enemy on the offensive. While it may sound miniscule it actually makes combat flow like one big quick-time event, and makes combat engaging. Combat is tied together nicely with flashy animations that accompany the character’s various abilities. Seeing a child in a costume transform into something like a giant robot or vampire just never gets old. Even if you’ve traditionally navigated away from turn-based games in the past, we’re willing to bet that you’ll find a lot to like when it comes to doing battle here. Other turn-based developers should take note. 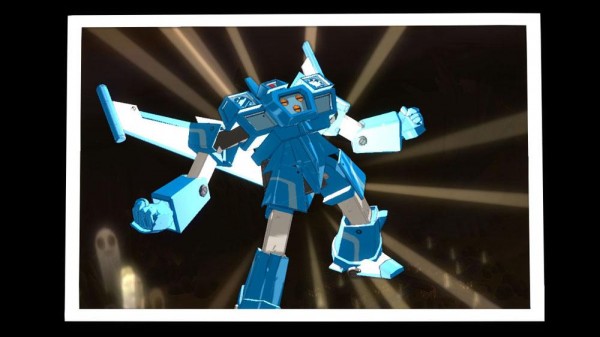 Charming soundtrack – During production, Double Fine talked about the Zelda franchise influencing their creation. Listening to the soundtrack, it’s no surprise. The game’s atmosphere is set perfectly by the music which is cut from the same simple, yet downright enjoyable cloth as the Zelda franchise. Simple melodies lend the spooky Halloween vibe to the game and help you see through these children’s eyes. We just can’t get a few of the game’s themes out of our head. You’ll be humming them for days. We promise, that the game’s soundtrack will bring a smile to your face now, and later down the road when you nostalgically revisit this adventure.

Humorous writing – While the art style and music may change from project to project, there’s one constant when it comes to Double Fine games; Great writing and humor. Think about all your own childhood memories related to Halloween. Now imagine how funny some of them would be in video game form. Whether it’s brother and sister fighting over who’s got the better costume, or the dynamic of children interacting with adults and monsters, all the game’s writing will keep you rolling with laughter. The writing goes a long way in helping create a lighthearted and enjoyable experience. You’d be hard pressed to find another game with such an enjoyable script on XBLA.

Lack of map – The one thing we found ourselves wanting in Costume Quest is some sort of map. In a game that rewards exploration and has so much to offer, we want to make sure that we explore every little nook and cranny. We want to talk to every single NPC, and search every single mailbox for candy. We want to make sure we assemble every single costume, and collect every last battle stamp and in-game trading card. Not to mention that it would make navigating the game’s environments simpler (Not that they’re hard to navigate to begin with). We know, we know, children don’t usually carry a map when they’re out trick or treating on Halloween, but for the sake of the game, maps of the environments would have been a welcome addition and probably pretty simple to implement as well. Maps are kind of a standard feature these days, but they’re strangely missing here. 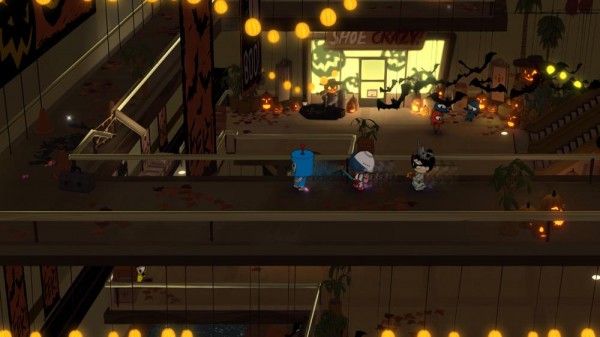 Tim Schafer and the folks at Double Fine Productions are known for making great games and Costume Quest is no exception. The game’s candy bucket is filled to the brim with adventure, imagination, personality, and good old fashioned fun. Today’s gaming climate is filled with dark, edgy shades of brown and gray. Costume Quest represents a bright ray of light in the face of an increasingly serious industry. On paper, the game is a turn-based role-playing game. In realization, it’s one of the best RPG’s we’ve played in years. Do yourself a favor; If you haven’t played Costume Quest yet, don’t hesitate, go buy it. Costume Quest is sure to become your latest and greatest Halloween memory.