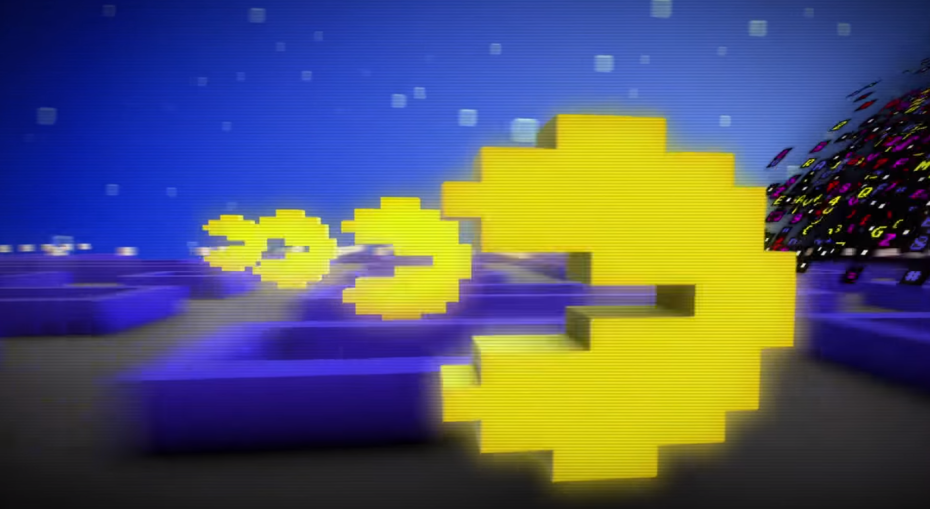 Pac-Man is one of the best examples of simple-yet-memorable gaming. The original game debuted in Japan in May of 1980 and travelled to the US in October 1980 with Midway distributing the cabinets. It’s a classic that has been endlessly remixed more modern takes (like Pac-Man Championship Edition DX) and re-releases of the original game on basically every conceivable platform in the world. The latest, Pac-Man 256, is in the remix family while paying heavy tribute to the original.

The premise is still simple, but it comes with a twist: you control Pac-Man while he tries to eat the pellets in the maze for points and fruit items for bonus point multipliers, all while trying to avoid the ghosts maze-patrolling ghosts from touching you. To fight off the ghosts, Pac-Man can consume a power pellet, which powers up the hero so that he can eat the ghosts to banish them for awhile until they respawn in a different place within the level. This is where things begin to differ from the original game. Unlike the original, Pac-Man 256 introduces a new element: a 256-level glitch that will perpetually chase the player from the bottom of the maze. For those not familiar with the glitch, the original Pac-Man was only able to calculate 255 levels, but upon beating level 255 the screen would be consumed by random letters, numbers and colored blocks. Being consumed by the chasing glitch is considered a “game over,” just like being touched by a ghost. So, do the new creative choices keep Pac-Man 256 fresh, or cause it to deviate too far from the source? 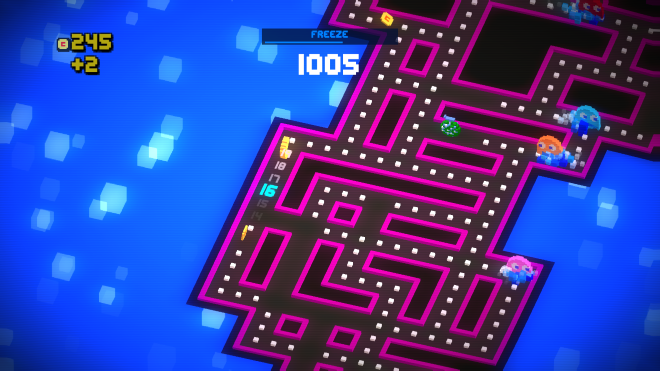 Improvements at a fair price — Pac-Man 256 originally launched on iOS and Android platforms as a free-to-play title with microtransactions built into the game. However, on its console release, it released with the price tag of $4.99 and no microtransactions. On the original mobile release, things like credits, coin multipliers, level themes and the ability to get power-ups earlier were all under the scope of microtransactions. For the console release, having the ability to get in and play without being bothered by the game to spend money to unlock things faster or refill your credits is definitely a good thing. Playing on an Xbox One controller or an arcade joystick is significantly better than playing on a touchscreen. Also, the addition of a four-player mode adds a fun couch-competitive element for sessions where players want to crush scores and show off exceptional plays.

Refreshingly remixed concepts and level themes — Pac-Man 256‘s display is on an angle and with a theme that honors its original pixel art roots while conveying a 3D aspect. There are also multiple themes like a classic “flat” art style available for immediate use. Some of the ghosts are even remixed with effects like traveling in packs or napping in place and chasing Pac-Man when he’s at close proximity. Pac-Man 256‘s concept of power-ups and loadouts takes inspiration from games like the Call of Duty series. As players goes through the game eating pellets, they will be slowly introduced to new power-ups spawning in the perpetual maze. At the end of a round, the game will calculate how many pellets were eaten. If the required number is met, the power-up is unlocked in your loadouts. Before starting a new round, players can customize three power-ups that they wish to have appear in the maze most often. Power-ups can range from a laser that spans across the maze to a freeze power that stops and slows ghosts. Upon picking up one of these power-ups, the power pellets end up increasing your duration of use as well. Dispersed throughout levels are coins that can be picked up and used to enhance power-ups through eight tiers.

Short and sweet but addictive — While I am not an ace at playing Pac-Man in its many incarnations, being able to play its latest release in short bursts while unlocking power-ups is still very fun. Pac-Man 256 will also challenge players with objectives such as eating four strawberries (over multiple games) or destroying 12 ghosts with the tornado power-up. Completion of these challenges earns players gift boxes that contain packs of coins used to further upgrade preferred loadout powers. I have had occasionally great round, ending up only 20 pellets away from the next power while saying “Just one more game! I have to get that power-up!” only to end up playing three or four more games instead and repeating the same promise-breaking cycle. 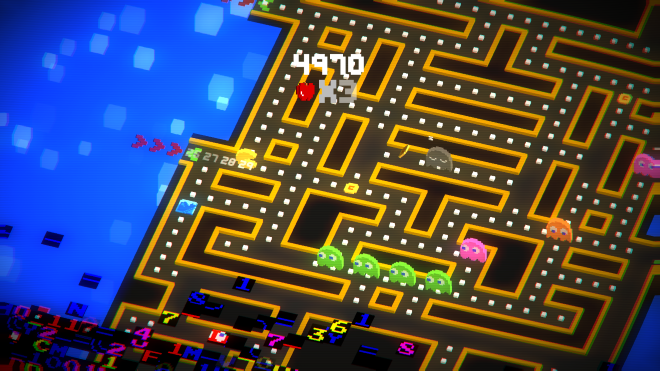 Short and grind-heavy progression — While short games can be fun, sometimes a string of them where a game doesn’t quite line up with needed power-ups or that has ghosts too clustered up to provide exits or being sandwiched by the 256 glitch can get frustrating. Pac-Man 256 also includes a lot of power-ups, so the grind to unlock them all may be off-putting to some players. Namco wants you to continually challenge high scores and upgrade your favorite loadout powers. This could potentially limit the appeal for those averse to this sort of arcade gameplay gimmick. 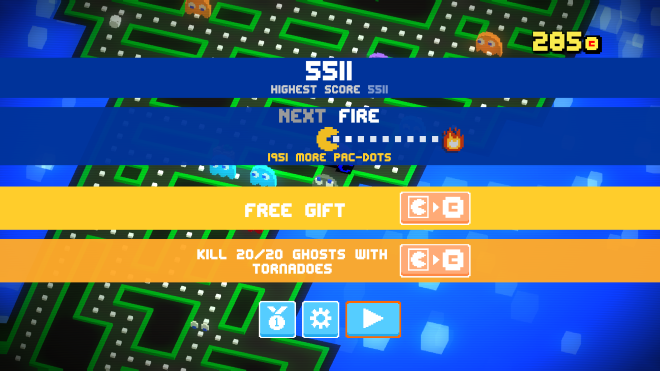 Pac-Man 256 is a game that appeals to those who grew up with the original. It also brings in fresh gameplay ideas to keep things interesting. While the chasing 256 glitch changes the focus from strategic use of the maze and power pellets, this infinite runner-style game element lends itself well to the high score chasing without interrupting from the occasional level interludes of the original Pac-Man. While Pac-Man 256 may be limited to players who like competing for high score and unlocking/upgrading power-ups, the game’s low price is a bargain value that will pay off in the long-term compared to how many quarters you’d spend playing the original at an arcade.