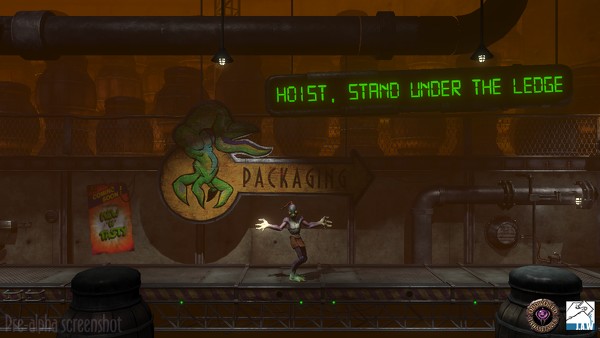 Gone are the days of “screen-flipping” that the original Oddworld games were known for. Oddworld: Abe’s Oddysee New N’ Tasty is being built from the ground up as a three-dimensional side-scroller. While approximately “eighty to ninety percent” of the game’s puzzles remain the same as the original game’s, the change in presentation and other small user friendliness related updates are said to have changed the way gamers move through the depths of the industrial dangers that await Abe. Don’t take our word for it however; Above you will find a video of the footage that Just Add Wated presented to the crowd at the Eurogamer Expo, in high-definition.

The relationship between the Oddworld franchise and the Xbox has been a long and complicated one. While the first two Oddworld titles launched exclusive for the PlayStation, Microsoft signed a deal with Oddworld Inhabitants to launch the third title in the franchise, Oddworld: Munch’s Oddysee as an Xbox exclusive, published by Microsoft. Oddworld: Stranger’s Wrath was the developer’s follow up, that also originally launched as an Xbox exclusive when it released back in 2005. Since its release however, Oddworld Inhabitants has closed and the UK-based Just Add Water Limited has taken over the franchise’s reigns, first releasing a high-definition remake of Oddworld: Stranger’s Wrath. While Just Add Water intended to release the game on the Xbox 360 (as well as other platforms), reports have flooded the internet that Microsoft has been unwilling to work with the studio to get the game on Xbox Live Arcade, or to release through the Games on Demand program. Just Add Water has tried several different channels including supporting fan-backed petitions to get the game released on the Xbox 360 in some way, but thus far, those efforts have been stymied.