Nidhogg 2 coming to Xbox One July 19

Nidhogg 2 coming to Xbox One July 19

While the original title never made it to Microsoft’s shores, Nidhogg 2 has navigated the tides and will deliver its special brand of sacrificial slaughter to Xbox One later this month. This competitive sidescroller presents itself as a twisted tug-of-war, where each player is trying to reach a goal that resides far behind their opponent. Battle ensues through simple yet strategic fencing, where one slight misstep is the difference between life and a punctured jugular. Taking out your opponent gives you screen advantage, but it may be short-lived as your opponent will be back and waiting somewhere farther along your path. Once you finally reach the goal you’re rewarded with the ultimate prize – to become a living sacrifice for a gigantic, hungry, flying worm. The battlefield will run rich with blood thanks to four weapon types and 12 uniquely hazardous stages, two of which are exclusive to the Xbox One release. Live out action movie fantasies on the Elevated Trains, or spice up work life at the Messhof Corporate Offices. Seasoned combatants can also look forward to new tunes, a new art style and character customization. Praise be the worm, Nidhogg 2 releases  on Xbox One July 19. 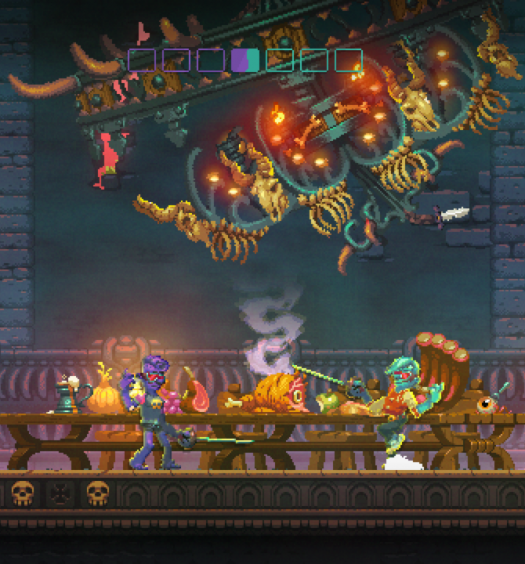