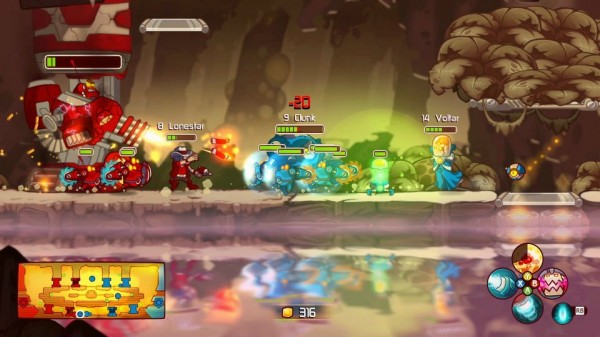 Fans eagerly awaiting the upcoming XBLA release of Awesomenauts got a little something to hold them over in the form of a whole mess of screenshots last week. Developer Romino Games posted a whole slew of screens to the game’s Facebook page Monday. You can see all of the screens in the Facebook photo album.

Awesomenauts is a 3-versus-3 MOBA (multiplayer online battle arena) title from Romino Games and DTP Entertainment. The game will hit for the Xbox Live Arcade and PlayStation Network. The game features tug-of-war or capture-the-flag style gameplay in which each team of three attempts to push their way into the enemy team’s territory to destroy an objective with the help of smaller, computer-controlled units. Originally scheduled for late 2011, the game is currently slated to hit in early 2012; no exact release date has been announced, nor has pricing.