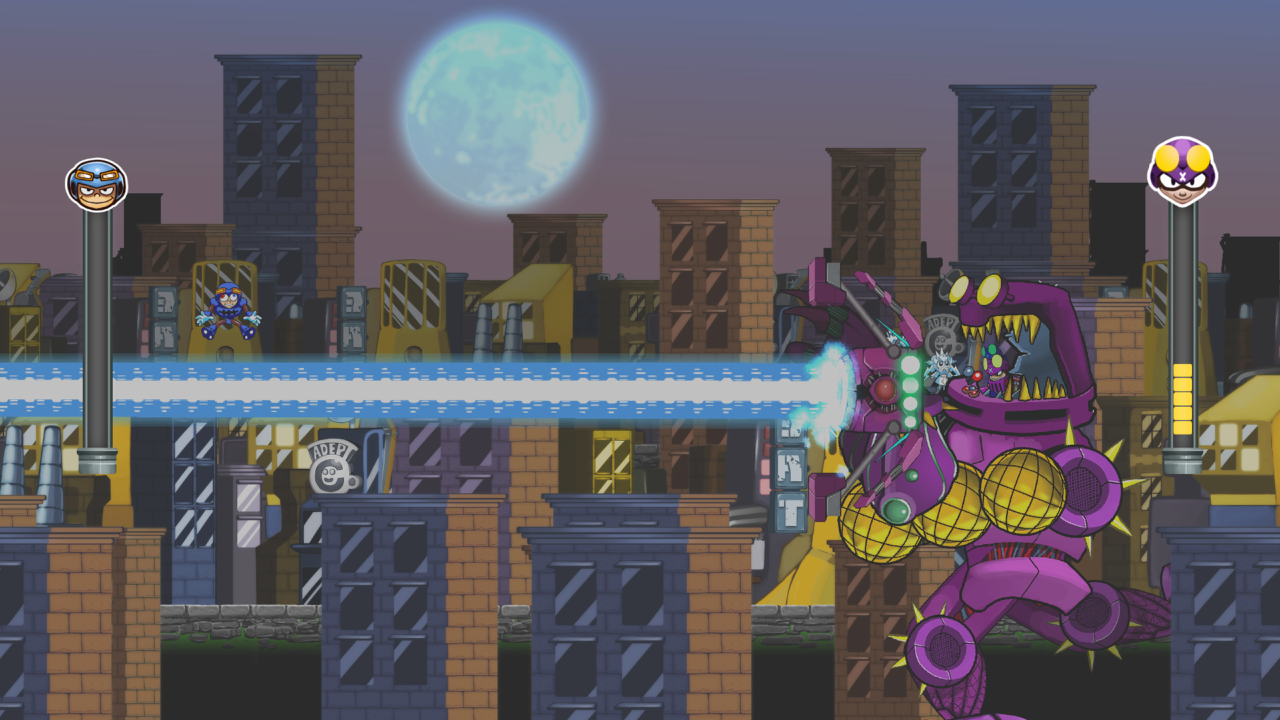 Video games love to put players in the role of a morally dubious anti-hero, or let you choose your own morally grey path, but few make you unquestionably the villain. Overlord. Manhunt. Captain Toad. Games that revel in true, unbridled evil don’t come around very often. Nefarious casts you as the most cliché villain in all of video games, kidnapping princesses and battling their would-be saviors with elaborate death machines. If nothing else, it shows just how much hard work goes into working towards a dastardly goal. Maybe the next time you’re kicking Bowser’s or Dr. Wily’s butt, you should show a little more respect for the time and effort they put in to get this far. 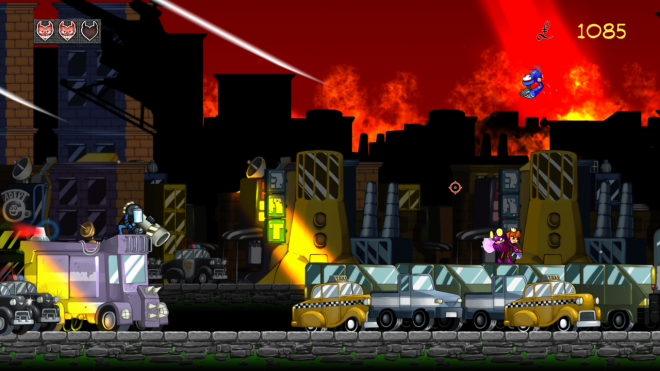 Pure evil – Nefarious takes the relatively simple premise of being the game’s boss and does a surprising amount with it. It’s a never-ending riff on familiar old-school sidescrollers like Mario, Sonic and Megaman that is really charming, even if it’s a bit too on the nose at times. Playing as professional evildoer, Crow, you need to capture the princesses of five kingdoms and use their royal energy to power the ultimate weapon. The game plays like a standard run-and-gun twin-stick shooter, but is balanced to make you feel like an overpowered boss. You got a giant fist for your melee that sends heroes flying, and your primary fire shoots grenades. Watching enemies fly across the screen after every punch and explosion sells the tone of the game in a very satisfying way.

And the kitchen sink – While each level has a different feel based on the kingdom you’re in, the first half of every level uses the basic gameplay described above. Once you nab the princess, the game goes a whole new direction. Each princess gives you a special power while carrying them, and the level design changes accordingly. Most just augment the core with a fun wrinkle, like bigger jumps or the ability to create platforms, but one turns the game into a straight-up infinite runner. The big finale comes when the kingdom’s designated hero arrives to rescue the damsel in distress, leading to a boss fight. Naturally, the twist is that you’re not the peon shooting at a giant foe, you’re the big bad trying to squash the peon. These fights vary greatly in style and genre, often parodying memorable bosses from other game. The game is constantly trying new things, and that’s not even counting the times the game goes ultra bizarre and ditches its usual level formula completely. You really never know what’s going to happen next, packing in tons of unexpected and interesting concepts in only a few hours of gameplay. 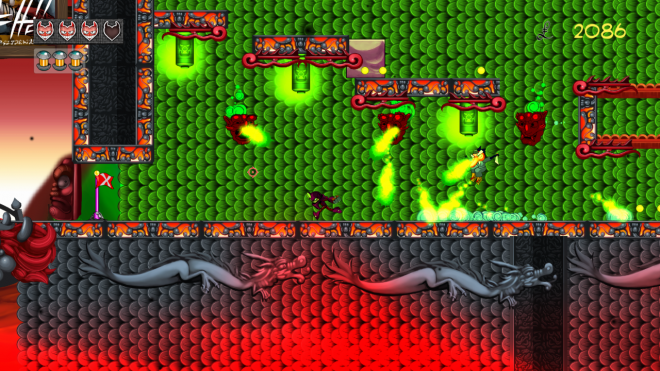 Master of none – As is the case with most games that try to do a little of everything, nothing in the game feels particularly great. While functional enough to play the game, the basic controls feel super floaty with awkward momentum. Punching weak enemies is incredibly fun, but hurting larger enemies lacks impact. Getting hit yourself also has terrible feedback, either causing a sudden slowdown or nothing at all. The last couple levels are a pain because of these problems, combining the slippery platforming with enemies shooting you dead in your tracks over bottomless pits. The princess power-ups fair the best, if anything improving the gameplay when they show up. The most undercooked sections of the game are the boss battles, which is disappointing because they’re the game’s defining feature. While they introduce new gameplay mechanics, they’re all the simplest rendition possible. The most glaring example is turn-based combat encounter; it’s conceptually cool to be the powerful boss in an old-school RPG, but it’s a supreme let down when you realize you only got two attacks and each hero has one they spam endlessly. Other fights fare better but are hampered by long health bars and/or powerful enemies that drag the encounter out too long. As if that weren’t enough, the game even ends on a boss gauntlet where these encounters are largely unchanged (though thankfully it doesn’t include every previous battle).

Too much water – For all the ideas the game throws at the wall hoping it sticks, the only one that has no redeeming qualities is the underwater level. The Eggman-esque pod used earlier in the game has been converted to a submarine, now dragging behind it an anchor instead of a wrecking ball. It’s painfully slow, made all the more frustrating by sensitive physics rocking your ship when the anchor snags on the geometry. The level design is mostly empty and incredibly easy; while there are some hazards, you got more than enough health to make it through without issue. The art style also gets an unexpected change, switching to all silhouettes with bright colors. The attempt here is too simplified to look good, making this dull trek all the more uninteresting. Cumbersome controls, no challenge and nothing interesting going on – I don’t know how long this level actually is, but it felt like forever. 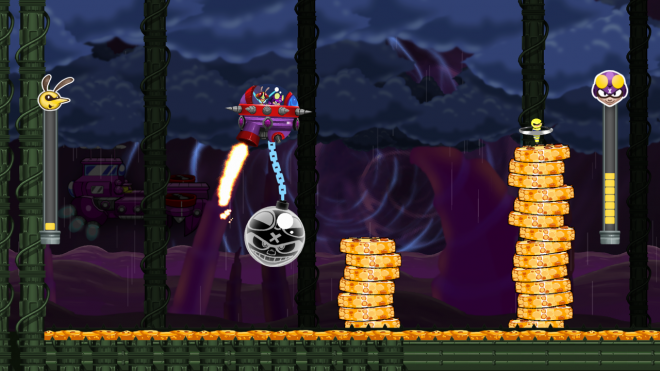 Nefarious attempts to show the other side of a classic video game power struggle, but like many evil schemes it just doesn’t pan out as intended. For all its ambitious goals, it buckles under the pressure at every turn. The blueprints are there, but it lacks the workmanship and polish to truly strike fear into the weak-minded masses. It might be good for a few sinister chuckles, but that’s about it.

Nefarious was developed by Stage Clear Studios and Starblade, and published by Digerati. It was released September 14, 2018, for $14.99. A copy was provided for review purposes. 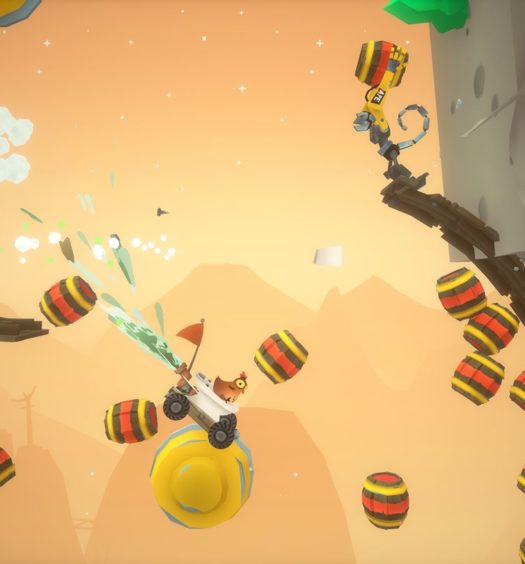 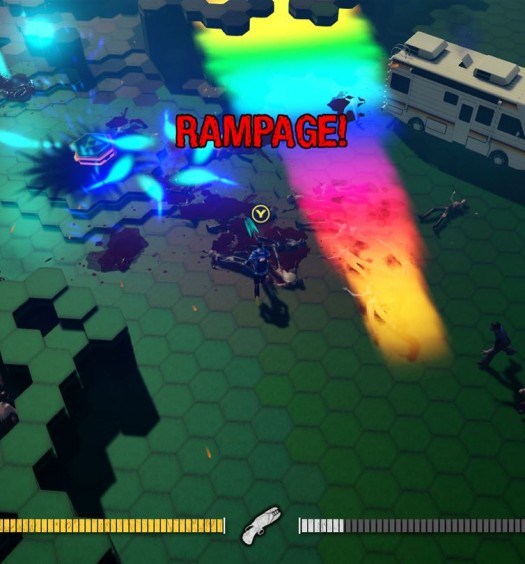