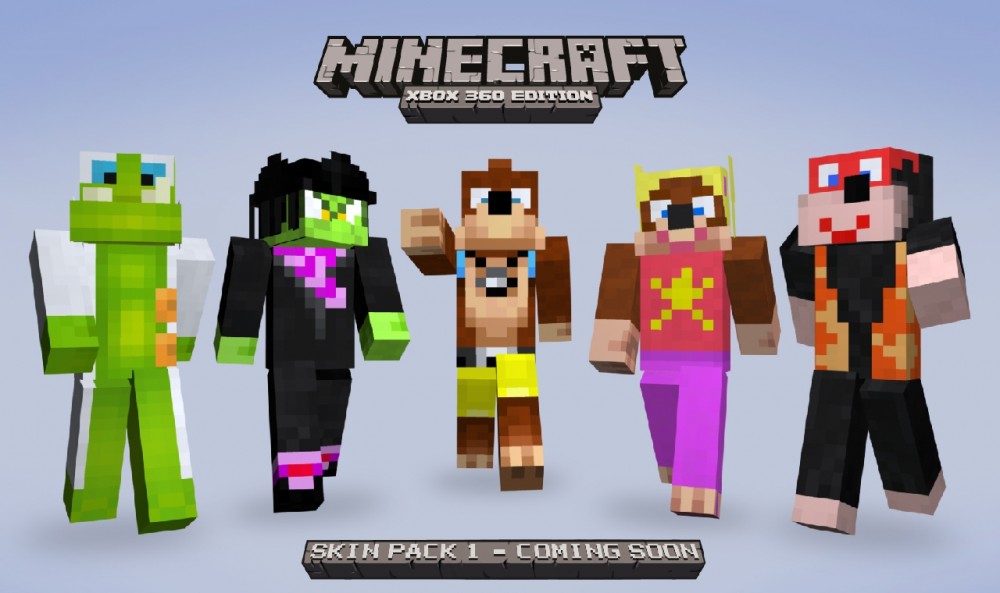 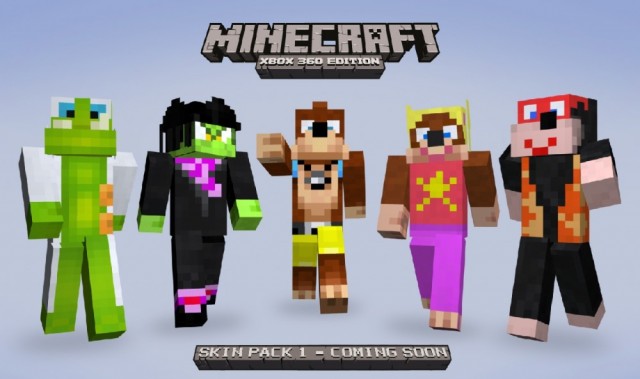 Call in sick to work, because the 1.7.3 update for Minecraft: Xbox 360 Edition lands tomorrow. The title update will go live at 2AM UTC. Among the new features and fixes are the inclusion of Pistons, a character skin selector, and precautions to keep unwanted players out of your game. Also detailed recently were a number of new skins for the upcoming Skin Pack 1 downloadable content. Banjo is joined by additional characters from the Banjo-Kazooie universe, and more variants of the Trials riders have been revealed. These skins join a growing list of characters including Master Chief, ‘Splosion Man, and Jack of Blades. Priced at a cool 160 MSP the pack will include 40 skins for players to choose from.

Hit the jump for a full list of features and updates included in 1.7.3 along with a glimpse of the new Trials rider skins. 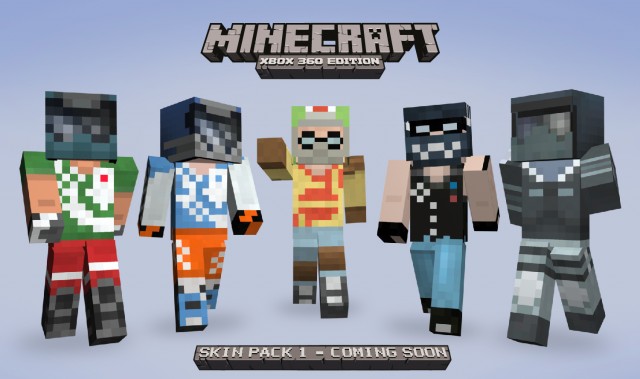 – Added Pistons & Sticky Pistons.
– Added Stackable fences.
– Added Shears – required to get wool from sheep, and to collect leaf blocks.
– TNT needs Flint and Steel or Redstone to detonate.
– Redstone wire will now connect to a repeater.
– New textures for Cobblestone and Brick.
– Added Character Skin Selector to allow players to choose their skin from the default skins, or from Downloadable Content skin packs.
– Added lighting improvements (brought forward from 1.8.2 update) and snow & rain improvements.
– Added a save file cache to improve the speed of displaying the saves list.
– Added ban list functionality to allow players to self-ban from levels they feel contain offensive content.
– Added a ban list section to the How To Play menus.
– Added an option for the host to limit online games to only players in their friends list (no friends of friends).
– Added a seed display to the level load screen (requires existing levels to be saved out again to add the display).
– Changed the tooltip display setting to in-game tooltip display, so that tooltips always display in menus.
– Added the crosshair to the list of things affected by the opacity slider.
– On using the quickselect bar, the opacity of the quickselect, tooltips, splitscreen gamertag display, and crosshair will be set to 80,
and will fade back down to the user opacity setting after 6 seconds of no quickselect bar use.
– Added some more Tips & Trivia to the loading/saving screen display.
Tutorial World changes & additions:-

– Added optional tutorial for Pistons and Redstone.
– Added a self-building bridge to the castle using Pistons.
– Added some sugar cane, cactii and clay to the world.
– Added a few other things for players to discover.

– Fix for only the host being shown the pop-up when any player attempts to place lava near the spawn point.
– Fixed tooltip for Flint and Steel.
– Fix for Note blocks not showing notes.
– Fix for Leaderboard reads taking too long.
– Fix to block players re-entering a level they have been kicked from, until the level is restarted.
– Fix to stop players being able to join a game when they are not a friend of any player in the game.
– Fix for Netherracks re-appearing after being mined.
– Fix for a rare crash on entering the Nether.
– Fix for attacking enemies at a different level not damaging them.
– Fixed a problem causing some save games not to load.
– Removed Herobrine.