Max: Curse of the Brotherhood preview: Imagining a world without miniguns 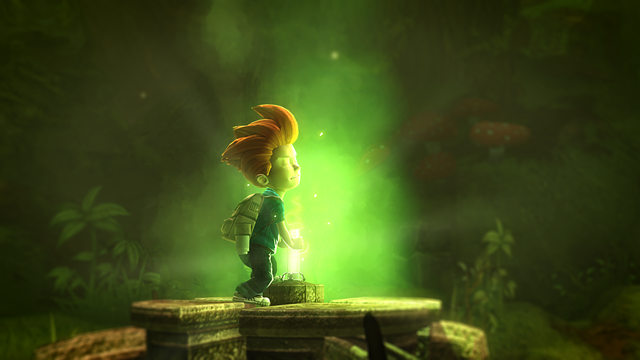 Max is your typical late-80s/early-90s video game or cartoon hero. He’s an adventurous young boy, colorfully drawn to life with a an oversized golden mane and a t-shirt that bearing a prominent reminder of the letter his first name begins with. He lives in a picturesque home in a neighborhood that is presumably full of residents who don’t know the meaning of the words “overcast” and “precipitation.” At the start of his adventure, a monster arm that’s more adorable than scary reaches out of his closet and nabs the little brother whom Max had just been fighting with. This event signals the beginning of an adventure that will see Max running through bright and varied environments and jumping over obstacles in his path.

But this isn’t the late ’80s. Nor is it the early ’90s. This is 2013. And in 2013, game and cartoon characters have guns. Usually big guns. Take, for example, one of XBLA’s most recent releases, Far Cry 3: Blood Dragon. Ubisoft’s ’80s love letter sealed with the blood of the titular dragons went so far as to give the player a minigun. Max: The Curse of the Brotherhood, however, does nothing of the sort.

“One of the things that is very appealing about this game is that Max isn’t armed with a minigun or a samurai sword, but he has this ability to control different kinds of materials that are in themselves not very dangerous,” says Mikkel Thorsted, studio director of Press Play, the developer behind Curse of the Brotherhood. “Basically he is armed with his imagination and wit, so basically when you encounter danger you have to outsmart the villainous henchmen. You have to outsmart them and lure them away, and stuff like that.”

Is the marker mightier than the minigun?
In the game, Max channels that youthful imagination and wit through a marker. A marker would seem a poor substitute for a minigun or a samurai sword, especially one that isn’t magic. Luckily, when Max comes across an old, dying witch early in the game, she uses her witchcraft to imbue the marker with magical powers. They’re not the sort of powers that let Max shoot, say, bolts of lightning or anything of that sort, though; they’re the sort of powers that let him imagine up changes to the world and then make them happen.

The playable level in the demo XBLAFans ran through at PAX East showcased the marker’s ability to draw vines to help him move through the forest environment we found ourselves in. It’s not long after picking up the controller that we encounter platforming challenges that appear impossible at first glance. The marker makes them possible. Max can draw vines at certain predetermined points in the environment that he can use to climb on and swing from to travel distances that he otherwise could not. The drawing mechanic is a breeze to get the hang of, which is great considering that the game often requires several vines to be drawn in quick succession in order to prevent Max from falling to his death. 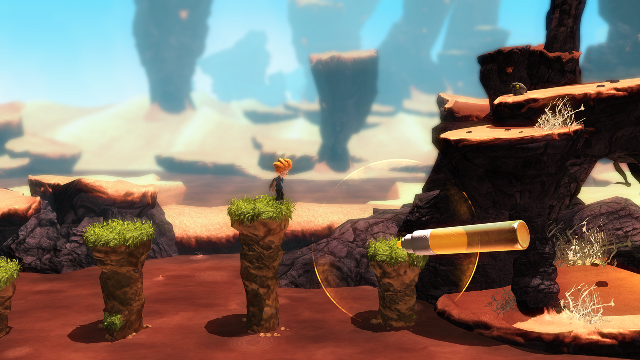 We don’t get to experience it, but we’re told the marker will later be able to draw much more than just vines with the marker. It will eventually gain the ability to manipulate earth, water and fire to help him along his way. World traversal and enemy avoidance are the key abilities granted by all of the marker’s powers. There are enemies in the world that will try to harm Max, but he can’t fight them directly. He must avoid them entirely or re-imagine the world in such a way that it does his fighting for him. In later sections of the game, it’ll take more than just vines to make that happen.

“So the way we have created the game is that we’ve tried to ease the player into how the mechanics work,” says Lead Designer Mikkel Martin Pedersen. Continuing, he explains that “you get each power, and you [learn] how each power works. And when you get more powers it becomes much more challenging, because you have to combine them and discover how you actually combine the powers and how they work together.”

Even wielding a marker that makes imagination reality, it wouldn’t be possible to draw Max to safety without another helpful mechanic. It’s a feature that would be called bullet time were there bullets in the game. Time slows to a crawl whilen while Max is mid-jump and another vine must be drawn quickly before time speeds back up again. Max isn’t necessarily safe once a new vine is illustrated into existence, though. Sometimes, the level immediately plunges back into slow motion when a new vine is drawn, and another vine needs to be drawn in a hurry.

“Variety is very important to us in the game,” says Pedersen. “In the sense of having to both draw and do platforming, it means we can sort of like shift the pacing by doing more platforming and then slowdowns and puzzles. I think some of the magic is the combination of how we can combine everything.” The puzzles in the forest level are easy enough to figure out, but actually solving them requires a quick drawing hand. 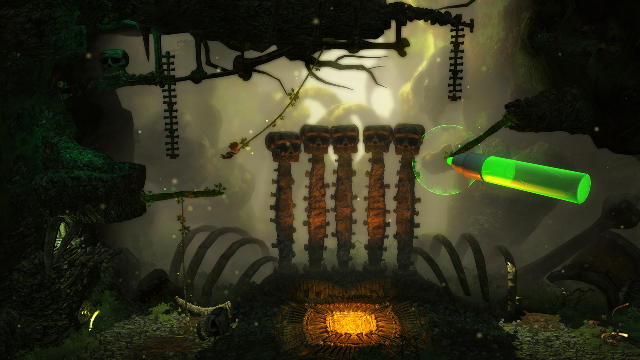 What type of game is this?
According to Thorsted, the aforementioned puzzles will play a big part in the platforming throughout the game. He explains that Press Play came up with a “sort of term you could use” to describe the game. It’s not particularly inventive, but it certainly is apt, judging by what was shown at PAX East. “It’s called a cinematic puzzle-platformer,” he explains. “And the cinematic means it’s a story-driven game surrounding Max and his quest for saving his little brother. And it’s also cinematic in the sense that we use the camera where we don’t have this fixed camera where it’s a 90-degree angle. We actually move the camera around a lot, creating a cinematic feel to the whole experience.”

XBLAFans didn’t notice the camera move around all that much during our playthrough, but perhaps that’s a testament to how smoothly it transitions from one viewpoint to another. Certainly it does a good job of showing the player the next portion of a puzzle that needs solving, which is precisely what Thorsted tells us it was designed to do. It helps that the vines Max can draw are brought to the player’s attention by shiny indicators. These indicators come off as a bit artificial in an otherwise natural environment, but they serve their purpose well enough.

As for the world itself, it’s another dimension known as Another Land. There’s some magic in it, but we’re told by Thorsted that this magic is realistic. Actually, I’m not so certain that drawing vines into reality with a marker is any more realistic than shooting something like a bolt of lightning. Regardless, Thorsted says that “it’s a very traditional fantasy world. The settings we have are settings that will be familiar to people who like fairy tales and stuff like that.” Specifically, he cites Scandinavian fairy tales a source of inspiration. 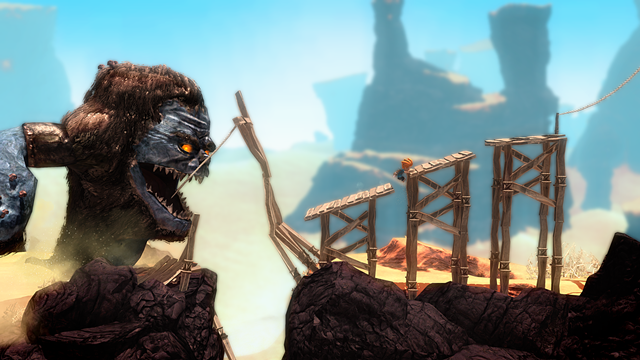 Those not so familiar with such lore might have a better time looking for bits of Press Play’s other inspiration peaking through: 1980s adventure movies. Specifically, Pedersen mentions The Goonies and Indiana Jones movies. “The impossible hero — he shouldn’t be able to do what he can, but he can. And he’s trying to redeem what he’s done,” explains Pedersen.

He says the game is targeting the “XBLA crowd.” Continuing, he explains that he means despite having a happy-go-lucky boy as its protagonist, Max: Curse of the Brotherhood is meant for older gamers. “It’s not a children’s game. You might be a small boy, but it’s really trying to appeal to guys like us.”

We’ll find out if Press Play’s “cinematic puzzle-platformer” can pull that off when it releases later this spring. My biggest concern at this time is whether or not Press Play can deliver on the variety it’s promising by giving the player enough options with the marker to keep things interesting, but if the PAX demo is indicative of the rest of the game, XBLA gamers have a fun new platformer to look forward to.