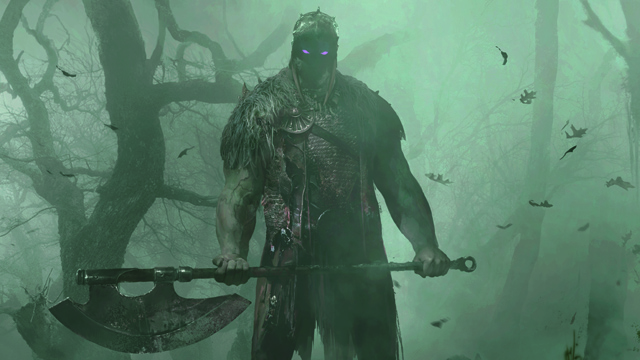 As the digital compliment to the largest trading card game on the planet, Magic – Duels of the Planeswalkers has arguably been the most accessible entry point in the intricate, often intimidating world of Magic: The Gathering.  Since its quick dominance of Xbox Live Arcade in 2009, the franchise has returned year after year, always touting new features, storylines and game modes as the annualized gateway into the scene. This year’s entry, Magic 2015 – Duels of the Planeswalkers, is finally delivering on something fans have been after since the beginning, the chance to battle with your personally customized deck across the planes.

“From year to year we try to dive into a new experience for new and existing players, something that’s a different way of playing magic,” said Magic brand manager Liz Lamb-Ferro during our hands-on time with Duels 2015. “This year instead of buying full decks, or deck slots, you can customize up to 30 decks infinitely.”

In past entries in the series, Duels of the Planeswalkers always followed a familiar deck progression format: You start with a pre-designed deck and bulldoze your way through a standing line of multi-colored Planeswalker opponents, unlocking their decks for your own use in the march toward the final showdown. This year there’s only one deck you’ll select at the start of that saga, the deck you build yourself. 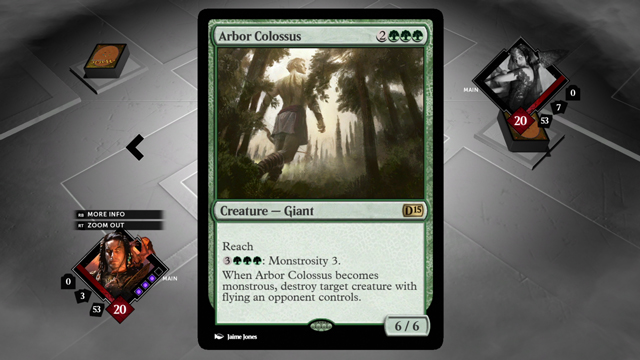 “At the end of the tutorial it will ask you to select a color,” Lamb-Ferro explained. “Then you’ll select another color to pair with it as you’ve played through, and that sets the foundation for your card collection.” Once you have the basic foundation of your deck, the focus shifts to card collecting, the other great change coming in Duels 2015. In the past, winning a battle with a pre-built deck unlocked a new card from a pre-determined set, which would be repeated a dozen times until the most potent cards were reached at the end. Similar to the physical game, now new additions to your deck come from booster packs, which are awarded for defeating each of the opponents in the many plane-themed levels.

Each plane also includes a random encounter, which pits you against themed decks built around a randomly selected enemy. In our demo, we drew a group of centaurs and quickly annihilated its appropriately centaur-heavy deck. In this way, you can revisit a never-ending well of booster packs, while staying in your favorite plane, without the fatigue of battling the same face over and over. The inherent elements of grinding for cards are still there, but the randomness of both the new encounters and the booster pack on the other side of it are a huge push in keeping the excitement of card collecting going strong.

All those collectible cards now funnel neatly into the Card Collection portion of Duels 2015, which displays every obtainable card in the game. Here you’ll look down on your budding arsenal as each initially greyed-out card pops to life with color once it’s uncovered and secured. The impressive series of built-in filters enable quick searches, allowing you to pinpoint the spells or monsters you’re after by selecting the type, rarity, cost, and the plane that houses them or any combination therein. 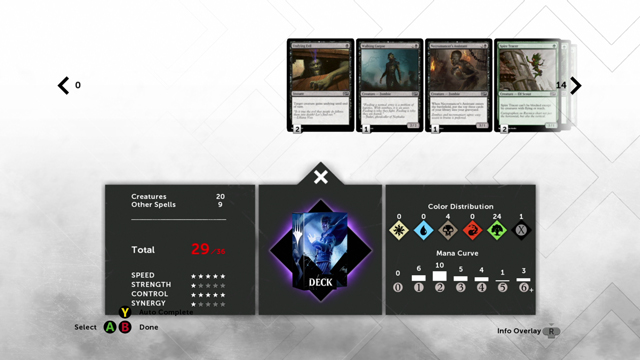 This new feature works back into deck building as you get a sense of what’s available to you and where you can go with the tools at your disposal. For example, say you unlock a massive creature that you want to build a deck around, but aren’t sure how best to fill it out. In Magic 2015 – Duels of the Planeswalkers, Wizards has made it possible to select a single card as the foundation of a deck, and then allow the AI to fill out the rest of the details. But in keeping with the goal of teaching Magic to new players, which Lamb-Ferro openly admits is more of an art than a science, Duels 2015 will help you appraise your new deck and show you where its strengths and weaknesses lie.

“The thing that I personally love about it is how you start evaluating this deck,” Lamb-Ferro said of the new mechanic. “How strong it is, the control side of it, the synergy level, the speed. This lets you self-teach and assemble something and then evaluate what you’ve built. I love this for new players because I want [them] to understand, ‘Okay, now why is that an awesome deck?’”

Though the long-awaited new features coming to Magic 2015 – Duels of the Planeswalkers are certainly the marquee draw this year, the series’ excellent presentation and loose storytelling have also been given a makeover. A new high-contrast black and white aesthetic paints the battlefield as an even moodier affair, while in-game videos and extras flesh out the narrative of Garruk Wildspeaker’s transformation from a nature-based powerhouse to a corrupted black-infused shadow of himself. And this year’s promotional tag, “Hunt Bigger Game,” isn’t just in reference to campaign. As the implications of fully customizable decks seep into multiplayer, you’ll find yourself squaring off against online players who can finally play exactly the way they want. Now online victories will be about the best built deck as much as they are about moment-to-moment skill and the luck of the draw. 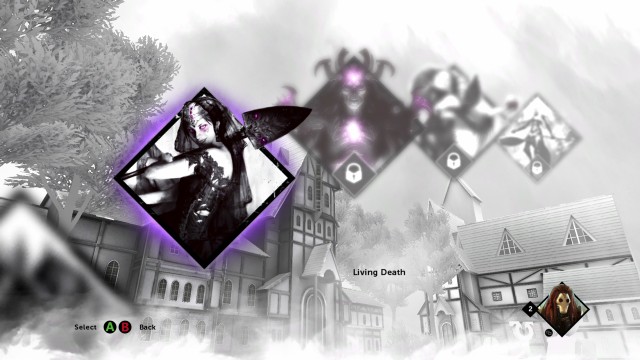 Slated for release later this summer, Duels will return to the Xbox 360 and make its way to the Xbox One for the first time at a price comparable to previous versions of the game. All told Magic 2015 – Duels of the Planeswalkers is without a doubt the most authentic recreation of the physical game the series has ever produced. If you’re a hardcore Magic fan, a new player looking for a way in, or just someone who enjoys the yearly Magic reminder, this is the version you’ve likely been waiting for.