If the young beauty knows the answers to any of these questions, she isn’t saying — she can’t. Red is mute now, raising yet another question: how did she come to be separated from that angelic voice of hers? 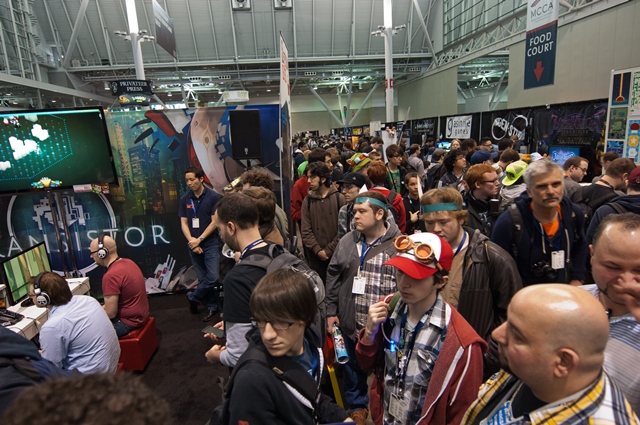 In search of answers

Perhaps Supergiant can shed some light onto Transistor’s dark corners. “So, we’re not saying too much about the story and the characters in it. But in the playable [demo] there is a voice that comes from the transistor that is lodged in somebody right at the start of the game,” Amir Rao, Supergiant Games Studio Director and co-founder says during an impromptu interview taking place amidst the hungry mob of PAX East attendees as interested in consuming the Transistor demo as you are.

It’s not much to go on, and details about Red are similarly scarce. Rao is only willing to say that “her voice was taken from her.” No details as to the how and why will today be provided. Back in the demo, you dawdle for a bit by a poster, despite the transistor’s palpable desire to push forward. It’s a poster of Red. She was famous, and perhaps that’s how the transistor knows her. Delay long enough and the blade will provide some enigmatic clues as to your past and your loss of the gift of voice. The time to sing is behind Red. The time to fight lies before her.

You want to know more. Why should Red fight? How should she fight? What is this transistor thing that she’s using to fight?

Rao relents, letting you inside just a bit. “So the transistor is a device that you find at the beginning of the game. It doesn’t belong to Red,” he explains. “It belongs to a group of people who tried to kill her with it, and now they want it back.”

He goes on to say that “the transistor is the source of all the powers you’re able to use in the playable [demo]. It allows [Red] to jaunt a short distance, sort of like a short-range blink or fire a huge, powerful line-damage breach. And I guess the most important thing about it is that you’re able to stop time whenever you need to and take a full turn where you can plan out your actions, and then you can undo them or needle out your plan for the next feud and see how it’s all going to turn out.” 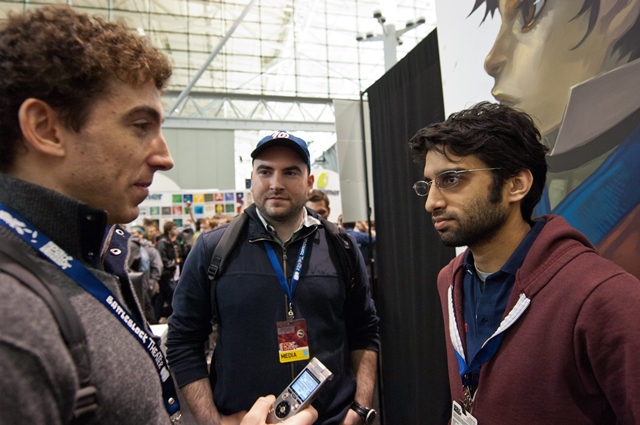 A turn-based battle system isn’t what you’d expect from the developers of Bastion, with its real-time action — and it’s not exactly what you get when entering into combat during Transistor’s PAX East demo. Red can freely roam across the battlefield and carry out actions on the fly, hacking and slashing at pursuing machines while manually attempting to navigate away from their own attacks. She can do that. You might do that for the majority of the demo, and you might enjoy it, too. But you’re also shown another option while playing the demo. As Rao will later remind you, you can stop time. The machines cannot.

When you pause time, Red takes her turn. The machines don’t. Red lines up her targets and chains attacks together. It almost seems to you unfair. You have an incredibly powerful weapon that allows you to dole out meticulously planned attacks. After you attack and the transistor’s ability to stop time enters into a cooldown, you run away to safety, maintaining a strategic distance until you can again take the upper hand. At least, that’s what you try to do.

The Process’ forces, you discover, aren’t so easily outrun. Rao tells you that “the really cool thing about the game with this sort of turn-based mode is it allows us to make the enemies really hard and really fast and sort of really, really scary.”

Red may have an all-powerful weapon, but Red herself is not all powerful. You choose to take your turn when the moment feels right. That means you can take it at any time and react to what Red’s pursuers are doing. “It also means that while you’re recharging the enemies sort of gain on you and come after you really, really quickly,” says Rao, “so for me it’s opened up a lot of design possibilities that we’re really, really excited about. And so the enemies go to cool places, and it’s been really fun.”

You wonder: what sort of design philosophies? “Even in the demo you see [at Supergiant’s booth] you start with that enemy we call the creep that moves really, really fast and moves significantly faster than you,” Rao begins to elucidate. “Very few enemies in Bastion did move faster than you. You could nimbly roll away from them and stuff like that. Here, everything sort of gains on you, so there’s a sense of oppression whenever you’re in this real-time mode that — guys are closing in. They’re coming in fast.”

Red’s main attack is slow. Her turn-based one, slower still. “They also hit really hard,” says Rao, “so it’s cool when you land them, but there is a little bit of time in there for enemies to gain on you. That doesn’t mean there won’t be fast attacks. We have fast stuff. Even the jaunt you can pump that out pretty fast — the little short-range blink move. So there will be a variety of feels to it, and you’ll be able to try and fight in real-time if you want.

“On the [Supergiant] team, there’s a mix of both. Some people use the turn mode all the time, others use the real-time mode and only use the turn mode when they get in trouble, so it just sort of depends on your own tastes, and there’ll be some expressiveness in there that you can take advantage of.”

Red’s mostly sluggish pace combined with the speedy enemies builds tension. She is being hunted and must outfox those repo robots that seek to reclaim the transistor from her. This mix of turn-based empowerment and real-time scrambling builds tension. Rao confirms that the game was deliberately designed to be playable in both real-time mode and in Supergiant’s own brand of turn-based combat. “Yeah, it was always designed that — part of putting it into a more immediate, real-time context was allowing players to play the way they wanted, and on top of that we already have that diversity. So I think depending on what your tastes are you’re probably represented by somebody who’s working on the game.” 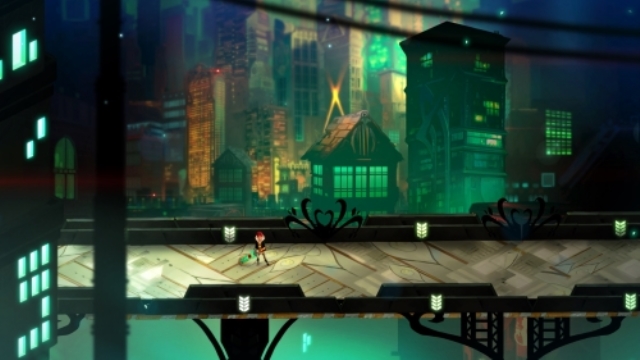 Haven’t you done this somewhere before?

Once you’re done putting that assertion to the test and have left nothing but shattered metal and circuitry behind where once stood the Process’ robots, you emerge from the indoor area that is the setting for the majority of the demo. Even were the transistor not to strongly suggest Red hop on one of the motorcycles in the parking lot she finds herself in, it would be obvious what you’re meant to do, just as in the beginning of the game. Still, you’re a gamer; you’ve been trained to always explore the areas you’re not supposed to go to before heading to the clear path forward. The transistor makes a few sarcastic comments aimed at getting Red on one of the bikes.

Red finally relents and does her best to impersonate yet another ’90s Final Fantasy character: Cloud Strife. A knowing smile creeps across your face as you watch her zoom away on her motorcycle, the oversized blade along for the ride with her. In the background is the sprawling metropolis of Cloudbank in which all is clearly not well. This is the end of the demo. Questions about Red, the transistor and the Process remain, but they won’t all be answered until Transistor‘s much-too-far-off 2014 release.

What about those apparent Final Fantasy nods, though? Specifically, is the end of the demo Supergiant’s homage to Square’s Final Fantasy VII? “I think for us there’s not any one inspiration, and we’ve heard that before,” says Rao of the Cloud connection. “It’s cool that people are reading that in there. Certainly there are fans of many Final Fantasy games on the team. So, I don’t think it was a — we’re not consciously trying to recall that, but you’ll see those influences sneak in all over the place.” 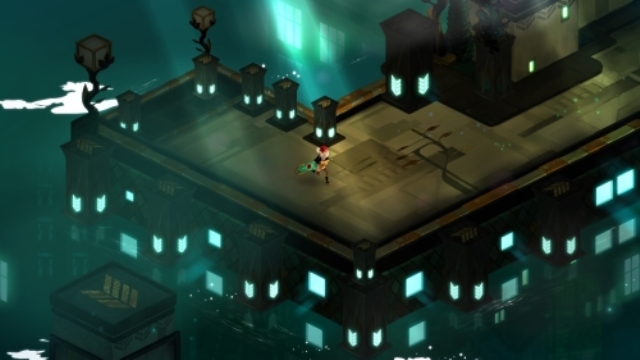 The entire team behind Bastion, as well as some newcomers, began working on the “first version” of Transistor immediately after Bastion hit XBLA in July of 2011. Rao lists Final Fantasy Tactics, Fallout 1 and 2 and Valkyria Chronicles as the games that most inspired the group. Taking those inspirations, the team created its own unique take on turn-based gameplay. Then it iterated. A lot. Supergiant knew where it was starting, but it didn’t know where it would end up — perhaps it still doesn’t — because “there isn’t a giant design document for the game somewhere,” admits Rao. “We just kind of built it slowly over time, and this is where it evolved.”

You can’t help but admire the current place Transistor occupies on the evolutionary chart while wondering what it will ultimately develop into. Red can’t say. Rao won’t say. You can’t see. The motorcycle ride is over, and so is the demo.